You wanna know who’s not feeling The Bern?

Unlike everyone else in Hollywood lining up for Hillary (I’m looking at you Katy Perry, Steven Spielberg, and J.J. Abrams) or for Bernie (I’m looking at you Mark Ruffalo, Susan Sarandon, and Will Ferrell), the star of Parks & Recreation and St. Elmo’s Fire took to Twitter to combat Bernie Sanders’s extreme class warfare rhetoric. A fiercely political independent, Lowe couldn’t hide his frustration at the socialist’s use of the tired rhetoric that rich people should pay their fair share.

Watching Bernie Sanders. He’s hectoring and yelling at me WHILE he’s saying he’s going to raise our taxes. Interesting way to communicate.

But the tweet that truly has everyone talking is Lowe’s invocation of his old character from The West Wing, Sam Seaborn. Created by well-known liberal Aaron Sorkin, the Democrat speechwriter for the fictional President Bartlett takes colleagues to task for their ridiculous rhetoric.

Good for Sam Seaborn, Rob Lowe, and Aaron Sorkin. Liberals love to pretend like conservatives have gotten more extreme over the years while progressives get more reasonable.

Well, Rob Lowe shows just how false that truly is. Over a decade ago, liberals were willing to call out their fellow partisans who lied in claiming that the wealthy don’t already pay a disproportionate amount of taxes while receiving fewer services. Now, there’s a socialist getting half the votes in the Democratic Party’s Iowa caucuses. 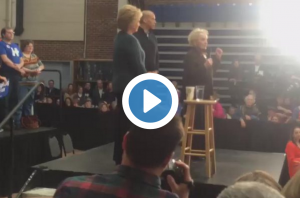 February 7, 2016 Madeline Albright Condemns Herself to Lake of Fire at Hillary Clinton Rally
Browse Our Archives
Related posts from The French Revolution