While I was a member of the institutional church, I always felt compelled to witness. We were all  told that someone’s blood was on our hands if we did not share “our gospel” with them. I make that distinction because I have since learned of another gospel, the one we were warned about. I was afraid of believing anything other than what I was taught.

Religion Flips it Upside Down

Religion makes it’s converts afraid . I am convinced that the gospel of love is the one Jesus preached but not the “conversion gospel” religion pushes. Jesus said, “Love God, love others” and that was the heart of everything he taught. Religion perverted the true gospel and then warned its indoctrinated minions to beware of “any other gospel”. Religion’s “gospel” doesn’t fall in line with what Jesus said. By twisting the truth, people are too afraid to consider what they’ve been told by religion is actually the lie.

A Short Story – The New Wagon

There once was two men, Jim and Bob, who each had a donkey and a wagon. They both were farmers, and every spring they would bring their crops to market. It was a long journey for both of them, and their wagons were loaded just as full as they could get them. They sometimes would talk with each other about things farmers talk about on their way to market.

Bob, who was gifted mechanically, designed a special wagon for his crops. He was now able to carry more to market than his friend. Bob was proud of himself and wanted to share his new invention with his neighbor. Bob was excited to witness to Jim all about this new wagon.

More goods translated into more money at the market for Bob. Surely his friend would want his plans for the new wagon. Perhaps Jim would even pay him to build a new wagon for him. It was a win, win situation. Bob felt that Jim would heed his witness.

Bob went to visit his neighbor Jim and began talking to him about his new wagon. The neighbor was polite and delighted for him, but refused the plans that were being offered to him. Jim believed that his wagon was working just fine as it was. He was not interested in Bob’s witness.

Bob was a little aggravated and disappointed at his neighbor Jim and went home. Bob’s wagon had already brought him more financial gain. He began to think of ways he might convince his neighbor Jim to yield. Then Bob could help Jim make the new wagon. Who knows, others may want a new wagon as well. Bob felt it could eventually turn into a lucrative business. If it did, Bob might not even need to go to market any more. He decided to try again.

Bob tried repeatedly for weeks to engage Jim in conversation about the better wagon. Whenever he saw Jim on the way to market, he would engage in small talk and then eventually, he would steer the chat toward Bob’s need for a new and improved wagon. Jim kept politely and lovingly refusing and time moved on that way for a while. Bob tried everything he could think of to sell Jim on the idea but nothing ever worked. Jim eventually became frustrated and one day he finally opened his mouth and spoke to Bob plainly.

“You know I’ve been trying ALL this time to get you to hear about the benefits of this new wagon. Why won’t you let me help you build one?” Jim just smiled gently and lovingly, looked Bob in the eyes and said, “neighbor, I appreciate your point of view, but I’m content with my donkey and content with my wagon.” Jim couldn’t let it go, “but you will be able to bring more crops and make MORE money if you do this!”

The neighbor again reached out and touched Bob’s arm gently. “Friend, I am an old man and I have always been able to carry ALL my goods to town. My donkey is old and he couldn’t pull that big heavy wagon of yours anyway. It is enough for my family and I and I am content”. My donkey and I are comfortable with the wagon he has. If I am content, my family is content, and my donkey is content, then why do I have to do things your way?”

Wisdom Speaks, but Not Always

The moral of this story is that we often want to sell something to someone who is not looking for what we have. Bob represents religion. It sells itself by saying it will make your life easier. You will have a connection to God and it will be more fruitful than what you had in the past. Yet, Jim represents those that realize “Godliness with contentment is great gain”.

A simple relationship with Christ is not hard. Loving God and loving others is not hard. I know that I have grown beyond the FG toons, but they serve as a reminder of the journey of deconstruction.

When you have something to share, please comment and I will respond to you. Thank you so much! 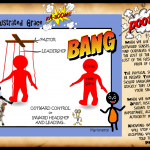 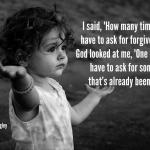