I was a corrections officer working in a jail in Texas. There were many opportunities while I was there to talk with inmates one on one. If they brought up anything “religious” in nature, according to the jail code, we could talk with them freely. One day, I spent some of my time with a young woman who absorbed the truth that I was sharing with her. When people are seeking, truth is so easy to give to others.

She said, “Miss Langley, I’ve never had anyone say the things you’re saying to me. You make it so simple, for the first time I understand it.”

I responded, “That’s because what I’m telling you is true. Truth is always simple and easy to hear.”

Her excitement was easy to hear, “I want to go home to my daughter and share these things so that, so that…”

I said, “So that she won’t think she has to DO STUFF to make God happy with her?”

I had fielded all of her many questions. I showed her how she could never be separated from God for behavior. We talked about what Christ accomplished and that ALL her sins had been washed away. Sins of her past, present AND future were not the focus anymore.

That Old Lie – If You Keep Doing It, You Didn’t Repent (make a toon?)

There were objections from her like, “But what about if I keep doing the same thing over and over?”

My reply, “Sounds like that doctrine that says if we say we’re sorry but then do it again, we don’t really mean it”.

Her head was nodding, “Yeah, and that God will make my mind, what’s that word?”

I knew exactly what word she was searching for, “Reprobate?”

Again, she shook her head up and down and pointed at me, “Yeah, that’s it. Will God turn me over to a reprobate mind?”

She needed me to show her through the lens of the bible, “Let’s look at it”.

And even as they did not like to retain God in their knowledge, God gave them over to a reprobate mind, to do those things which are not convenient; 29 Being filled with all unrighteousness, fornication, wickedness, covetousness, maliciousness; full of envy, murder, debate, deceit, malignity; whisperers,

Without understanding, covenant breakers, without natural affection, implacable, unmerciful: 32 Who knowing the judgment of God, that they which commit such things are worthy of death, not only do the same, but have pleasure in them that do them.

Are you a God Hater?

I read the verse she had referenced to her out loud. She saw that the writer was detailing a history of those people in the past who didn’t know who Jesus was or the new covenant. The verse mentioned people who were “haters of God”.

As I read, these words struck both of us, “haters of God”. I stopped and looked at her, “Is that you?” This time her head was shaking a “no” as she said softly so the other inmates couldn’t hear her, “No.”

Here was a woman in jail physically but being freed in her mind. Instead of just sowing seeds, she had really received the WHOLE Truth!

Her eyebrows frowned as she asked, “WHY don’t they teach you this in church?”

There was so much enthusiasm in her heart that she interrupted, “AND people would leave the church to have a relationship with God and each other!”

I didn’t have to say anything else as she added, “WOW, people would be free, really free to be who they are.”

When truth is really truth and love is really love, its easy for people to hear and ingest. This young woman took a hold of that truth and swallowed it like an eager fish inhales a hook. This woman would not have to pay like a fish does. When she heard the truth, it was simple enough to pass on to others. Simple enough to live free. This was a truth that did not come with consequences. That’s the difference between a real gospel and a religious one. 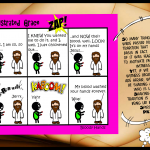 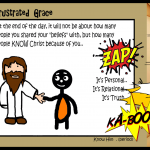 May 18, 2019 Happy Birthday Dad
Recent Comments
4 Comments | Leave a Comment
"Women already DO pay for their own abortions. It's a vile reich-wing LIE to pretend ..."
Ocelot Aardvark Abortion is complicated
"I long for a tribe. Have given up looking. Have contacted Felicia even though I ..."
gloriamarie Reinventing the Wheel – A Hope ..."
"I appreciate the healthy separation of Jesus from unhealthy religion. I particularly like the graphics ..."
James Elliott Jesus and PTSD
"amen!"
Brandon Roberts Law, Anger and Lesbians
Browse Our Archives
get the latest from
Progressive Christian
Sign up for our newsletter
POPULAR AT PATHEOS Progressive Christian
1