Watch The Video Below – It Brought Me To Tears

A man sat inside a white van with his son. I watched the news this morning, and the scene I saw had me in tears by the end of it. Perhaps that makes me a liberal? Let me tell you what I saw before you make a decision on what political party I align myself with, or if that even matters. As a teaser, I will tell you that I have voted for Republicans, Democrats and even an Independent once. Hopefully, you will walk with me as I reveal why I cried and perhaps you will understand or be incensed.

Were My Tears For The Man?

As I watched, I was stirred in my heart. Why? Did I cry for the man in the vehicle? If I did, perhaps it was because he has been in this country for fourteen years. Maybe it’s because he has a family who loves him and cares about him. I might have cried for him, but I don’t know him, nor do I know his story. If he works and comes home every day, and is a great husband and father, are facts that I just don’t know. He may be deported or jailed at this point, and he and his family will be separated for sure. I didn’t cry for this man. He knew the risk involved.

Were My Tears For ICE?

Could I have been crying for the ICE workers who were putting their lives in danger to keep the law? It could have been because the ICE officers have family members as well and that their jobs are difficult. I watched them break through the human chain that was there to prevent them, with what appeared to be little effort. No one appeared to be threatening them in any way. I saw no weapons in the protesters’ possession. ICE smashed the window in the van where the man was and arrested him without incident. My tears were not for the ICE workers. I didn’t worry about them or feel sad or angry at them. They just did their jobs.

Were My Tears For The Son?

There was a young boy in the van when ICE showed up to apprehend his father. This young man is probably a legal citizen because he looks like he was more than likely born in this country. His father has been here for fourteen years. I do not know him, nor do I know his relationship with his father. If his father is jailed or deported or both, it is probably going to be traumatic for him, regardless of his father’s choices. He is a victim. Part of me does feel compassion for him and if you don’t feel something, I would be concerned about you as a human. My tears weren’t for him either.

Some might cry for joy. American pride may be behind those tears. America is booting out these illegals and enforcing the laws of immigration as it should. There are those that celebrate moments like this because they are happy about our administration and their course of action. After all, this man has been in the United States for fourteen years! My heart was not move for joy. I don’t know who could look at two opposing forces and celebrate conflict. It wasn’t joy that moved me to tears.

Well, what I saw this morning was a group of people protesting the ICE attempt to apprehend an illegal immigrant. As I watched the video, I saw people of different cultures and ages hold hands and simply stand as a symbol of defiance. They did not agree with what was happening. A woman who was interviewed said, “It’s wrong”. They protested because they felt ICE should not be taking this man. They didn’t say the law was wrong, but the act of taking this man from his family was wrong. I applaud that action. My tears were for the cumulative response of people who cared.

The tears were for people who did SOMETHING. I cried because they stood up for what they believed in. To me, it was a Jesus move. You know, like the adulterous woman that the keepers of the law sentenced her to death for. According to the law, she was to be stoned to death. Jesus stands between her executioners and showed them that the heart of the law is mercy. Once the Jews saw none of them were perfect, the law of the spirit of life had superseded the law of sin and death.

The Law Is The Law

Believe me, I get it. He broke the law, he knew that he did, and he has to pay the consequences. When we make choices, we are privy to the results. The law is the law, but sometimes the law goes against everything that we feel is right. For instance, it was once a law that you could own slaves and that women weren’t allowed to vote. Society evolved and rose up against what they felt was wrong and changed the law. When enough people invest in change, it happens. This gives me hope for humanity. Laws are not absolute.

Years ago I was standing under an African Sun in Tanzania. A tall young African man named, Sune (Soonay) was talking with me about America. He said to me that the American Dream was real to everyone who lived there. I was surprised to hear him say what he did. “We pray to God that he would fly us over your country on the way to Heaven if we don’t live to see it so that we might look upon it one time.” My heart swelled with pride, but I also understood how valuable it is to live in the United States. It helps me understand the draw to come here, even illegally.

Every year people come into this country to escape poverty. Yes, they do it illegally. Some die horrible deaths and never make it here. They do it out of desperation, and some come because their family is in the United States, and they could not get legal permission to come themselves. If I was separated from my family, no mountain is high enough or border too wide to prevent me from being with them. If I could not give my family enough in my country, I would leave and yes, may even consider going illegally. It’s something I admit I would do.

Mercy Should be Greater

Instead of building a bridge for these people who have families and are working hard to make a life, our country has decided instead to sever families from one another. It hurts my heart and brings me to tears over the trauma that this causes. I believe that Jesus would choose mercy over justice in these situations. I do not believe that these individuals hurt our country as much as they help. That man had worked and lived in the United States for fourteen years. We have plenty of opportunity to share. My heart believes that Jesus would and so that is what moves me to tears.

It would be nice if we could find some middle ground that would keep families together. I do not believe that anyone could ever celebrate the separation of families. Could we give them more choices to possibly legalize their family member? I don’t have all the answers, but I hope that the human part of us could consider an alternative that leans toward the side of mercy. I believe Jesus would do that.

LangleyTown has a specific page for materials that will help you with your deconstruction. There are over 80 books listed here to assist you with your journey. Some I have read, others have come recommended by friends along the way. Find them here. 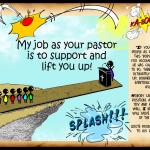 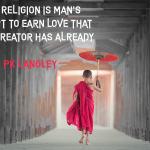 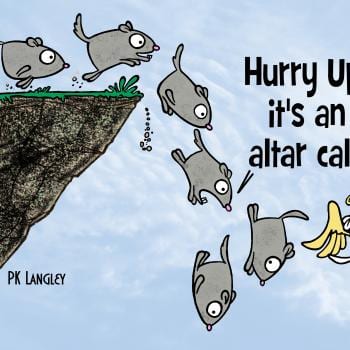