Billy Corgan on Christian Rock: I Think Jesus Would Like Better Bands 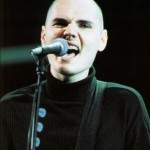 The Smashing Pumpkins helped me get through my adolescent years. When Mellon Collie and the Infinite Sadness was released in 1995, I was a hormonally-charged fifteen-year-old wondering how on earth to make sense of the chaos of life around me. “Despite all my rage, I am still just a rat in a cage” became something of a rallying cry for me that year. And then in my senior year of high school, the rock band I was in performed the Pumpkins’ 1993 hit “Today” at our school’s Battle of the Bands. To say the Smashing Pumpkins had a profound affect on my childhood would be an understatement. Now that I’m in my thirties, I’d have to say that if I had the opportunity to sit down and pick the brains of three established musicians, Pumpkins’ front man, Billy Corgan would probably be at the top of that short list. The guy has never been afraid to delve deep into the human psyche and swim around in not only our common desires as people, but also pick apart the deepest, darkest muck that most people in their right minds keep hidden. Thankfully for the rest of us, most artists like Corgan are rarely in their right minds.

Corgan recently shared his thoughts with CNN on the failed belief that “misery makes for great art” and confessed that he’s now exploring the vast concept of God in his music. His advice for current Christian rockers: “Make better music…stop copying U2.”

View the full interview below: