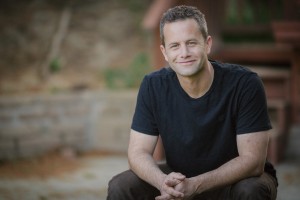 (Find Part One of this interview here)

When Kirk said he got into trouble with evangelicals over Unstoppable, I almost wrecked my car. Kirk, as many know, is virtually THE right-wing evangelical poster boy.

“Kirk, you’ve got to tell me more about that,” I said.

He paused for a moment and then gave a rueful laugh. “Don’t get me wrong, I think they appreciate what I tried to do in this film, but they wanted me to tone down everything.”

The “everything” refers to his vignettes telling the fall of Adam and Eve, plus Cain killing Abel in the first murder. These scenes shocked me with their realism, honesty, and the refusal to turn the camera away during Abel’s brutal death.

Even more, Unstoppable doesn’t flinch from showing an earthy, gritty realism. When Adam (who is bald, an interesting but creative choice) looks at Eve, you can see the outright desire in both of their eyes. Too many times in evangelical movies, lovers look more like kids “checking yes or no” in elementary school rather than adults with real sexual desires. Kirk shows the sexual desire and beauty at the beginning of Adam and Eve’s relationship.

Further, Cain killing Abel is just a brutal and realistic scene. It’s not violence for violence’s sake, but a realistic, horrific vision of what the first murder would have been like. In the film, Kirk makes the point:

“Now, imagine this, not only does God take the side of the murderer (Cain), but he puts a mark on him. That mark protects him and warns others not to touch him. How do we answer that?”

Even more, Kirk tells the story of the flood where God wipes out the earth. In a twist, he uses a “Hollywood” pitch with executives turning it down because, “God seems like the villain here.”

When I asked Kirk about the flood, he paused and said, “I had a lot of friends who wanted me to tone that down for the film; they felt it was too much.”

“Wait a second, Kirk, you had evangelicals asking you to tone down the Bible?”

He paused for a moment. “Well, I’m sure they meant well, but I felt like I had to tell the truth or it wouldn’t be honest to the questions I wanted to raise in the film.”

Now, imagine me, having grown up in evangelical circles, hearing all my life that the Bible is the final authority, and now certain unnamed leaders are asking a Christian to “tone it down.”

I pressed on, “I have to say this blows my mind.”

“I’m not sure what to really say. I mean, it’s all there in Genesis. The blood. God’s judgment. The problem is that most Christians shy away from those passages. I really didn’t want to. I wanted to be honest,” he said.

Then I hit him with the question: “Kirk, this seems like a new artistic direction for you. Am I wrong?”

“Well, you’re not sugar-coating things or pulling punches. In some of your other films, you’ve gone for the “canned,” right-wing, evangelical responses. Now, you’re being real. That is a different artistic choice to me.”

I’m often amazed at how simple words and observations can transform people. At the beginning of the interview, I felt like I received guarded answers from Kirk. When I mentioned the words, “new artistic direction,” he lit up.

“Jonathan, I mean, I’m trying to mature and grow in the way I express my faith through being an artist. I mean, it’s not easy trying to figure out how to be faithful to God while being an actor/director/writer or whatever. I think I’ve gotten a lot better in the last five years. When I make a piece of art, the message used to take precedence. Now, I’m realizing, if you sub-create, imitate God in His creation, you can’t help but reflect the truth of the Gospel. Let’s face it, God didn’t write John 3:16 on the world, did He? I get it wrong sometimes, I know. But, I’m trying to be faithful. And, there are times when I’ll still shout for the deaf to hear.”

This answer blew me away and completely changed the direction of the conversation. We both became animated about art, movies, and the power to tell the truth through story. As we progressed, we talked about the ending of the film.

“Kirk, I was afraid you would give us trite, canned answers at the end of the film. You know, wrap up the problem of evil in a nice little bow. But, you didn’t. You didn’t pretend to know why God allows suffering, nor did you go for typical evangelical platitudes. Why?”

“Well, as you saw me say in the film, I don’t think God Himself answers the question. He certainly doesn’t tell Job. Rather, God points to His Son, Jesus. God says, “This is what I did about evil in the world. I became a part of it, endured the sadness and the pain myself. Even more, I took responsibility through the death of my Son on the Cross. All my anger I took out on myself. So, my answer to the problem of pain is, I don’t know the full answer; but I know what was done about it.”

Imagine that, kids, Kirk has the same view of the problem of evil as my favorite theologian, N.T. Wright, who lays out this view in his book, Evil and the Justice of God.

We finished the conversation as I recommended some books to him about Christianity and the arts. He thanked me, and I said, “Kirk, thanks for killing my perception of you. I really appreciate it.”

He laughed and said, “Thanks for really taking the time to watch and digest the film. I’m really grateful.”

“Well, it’s a matter of respect. Are you saying some people didn’t watch it before they interviewed you?”

And, really, it was a great interview. The publicist told me in no uncertain terms that I only had twenty minutes with Kirk. Once we started talking about the arts, the conversation went over; as in, we talked for almost an hour and a half on his way up to Yosemite. We would have talked more, but my cell kept dropping the call.

Am I completely convinced now of Kirk’s approach to Christianity? Not a bit. But, I respect him as an artist. Why? Artists are supposed to have the balls to challenge the status quo. Indeed, I see way too many Christian artists, either right-wing hacks or left-wing imitators, afraid to take risks.

On the right, we have schmaltzy, silly, syrupy movies, paintings, and music that are designed to make everyone feel good.

And guess what? The evangelical left it is no different; it just looks cooler. They’re afraid to take risks that might make them seem uncool, such as talking about “blood redemption” or “personal sin.”

Kirk, for whatever his faults, is a rebel artist who has the guts to present the Bible as it is, make the art he wants to make and tell everyone else to “deal with it,” even if it’s his closest friends. For that, I applaud him even If I think he should work harder at not being so belligerent in some of his apologetic videos.

So, take away from this interview what you will. I had a cool conversation about faith and art that I didn’t expect. “He who has ears, let them hear.”

August 22, 2013
The Adventures of Kirk Cameron, Evangelical Rebel, Part One...
Next Post

August 24, 2013 Billy Corgan on Christian Rock: I Think Jesus Would Like Better Bands
Recent Comments
0 | Leave a Comment
""I must confess, I HATE Christian radio. There are always exceptions, but more than ever, ..."
Krysia Berdinski DeGraaf Christian Music’s Authenticity Problem (or How ..."
"That's right my man. (Sorry to resurrect an old article) but it's still true. It ..."
▌Đeparture ▌ Christian Music’s Authenticity Problem (or How ..."
"We both share the same dilemma. We embrace our understandings of the Gospel and, therefore, ..."
JOB2001 Why Reformation Day is Dumb…
"Sorry for jumping to conclusions without knowing you! Regarding your dear aunt's fear, one should ..."
Truth Why Reformation Day is Dumb…
Browse Our Archives
get the latest from
Entertainment
Sign up for our newsletter
POPULAR AT PATHEOS Entertainment
1