Harry Potter: The Magic of God? 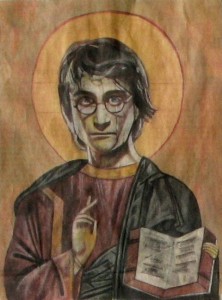 As I’ve discussed before, as much as I love reading, it takes me a little longer to get through huge volumes than it might for the average reader. As a result, delving into the seven-book Harry Potter collection (four of which are the size of Webster’s Dictionaries) seemed more than a little daunting. But after years of putting it off, I finally decided enough was enough. On a soggy Thursday back in March, while sitting in a jury duty waiting room, I finally entered J.K. Rowling’s magical world.

Before long, I was immersed. I began posting my favorite Harry Potter lines on Facebook and Twitter, which turned out to be a huge hit. I heard from a bunch of people who’d read the series as kids, many of whom claimed to be vicariously journeying along with me. One day, a fellow commuter on my train even expressed her jealousy that I was getting to read through the books for the first time as an adult. She had a point. Being a first-time Harry Potter reader in my thirties, after having read so many different complex books over the years, gave me a great adult perspective on the lives and eccentricities of teenage living. Quite frankly, many instances brought me right back to my high school years. Teen crushes. Taking tests. Hating teachers. Destroying Horcruxes. You know, that sort of thing.

From book to book, I found myself essentially growing up with the characters even though only a few literal months had passed me by. Rowling’s ability to take me into new worlds with every novel, each one spun into a magnificent web of enchantment, was unlike most books I’d ever read in my life. The plot intricacies, the pacing, the flow, the character development, and most importantly, the vivid descriptions that brought everything to life, sucked me in like a vortex and didn’t let me go until the final page of the last book.

By the time I reached the Deathly Hallows, something new and dramatic had taken hold in my mind. Throughout the first six books, I was an interested observer of the ongoing story. Heavily invested of course, but little more than a fly on the wall. By the final book, however, I felt as though I actually was Harry going through his gut-wrenching, death-defying journey along with Ron and Hermione. Each dangerous encounter became my own experience. Each devastating loss was my loss. Each quarrel with a friend became deeply personal. I couldn’t believe it was possible for the series to get better as it progressed, but as I look back, I think the final two books, Half-Blood Prince and Deathly Hallows, may just be the greatest novels I’ve ever read.

Sadly, much ink has been spilled over the past sixteen years by religious figures who claim the Harry Potter series is inherently evil and should be banned or burned. These are usually the types of people who hate Halloween because they simply don’t understand its Satan-mocking origin. It’s funny how these same figures conveniently ignore the Harry Potter series’ condemnation of “dark magic,” the exaltation of self-sacrifice (even to the point of death), the criticism of corrupt government, and the virtue of not seeking your own gain ahead of others, even your enemies. I mean, how many times did Harry save Draco Malfoy?

By the end of the series, Albus Dumbledore, widely considered among the characters to be one of the wisest wizards of all time, finally reveals to Harry the corruption in his own heart in that (spoiler!) pursuing the Deathly Hallows and the invincibility they promised ultimately cost the life of his sister Ariana. Dumbledore even inscribes Matthew 6:21 verbatim on the tombstones of his mother and sister, “Where your treasure is, there will your heart be also,” a verse that later manifests itself in Harry’s heart when he (spoiler again!) seeks the Resurrection Stone and Elder Wand, not for his own selfish gain, but so that he can fulfill his life’s ultimate call.

Throughout the series, the existence of the soul is treated with utmost reverence. Dementors – basically the biblical equivalent of demons – torment and, if given the chance, suck the soul out of their prey. Furthermore, (yup, another spoiler!) Voldemort’s decision to split his own soul into seven pieces in an attempt to gain immortality is decried in the novels not only for the murders necessary in order to commit the heinous act, but also for the dehumanization that soul fragmentation causes. The only way to restore the soul at that point is for the killer to experience genuine remorse, a decision the Bible clearly calls repentance.

Perhaps the greatest biblical tie-in woven throughout the series can be found in Harry’s parents choosing to die to protect their son from Voldemort’s killing curse when Harry was a helpless baby. This storyline goes hand-in-hand with the climax to the series when (MEGA spoiler!) Harry sacrifices his own life at Voldemort’s hand. He then enters an intermediate state between life and death before choosing to return to life – a Christ figure, so to speak – so that his surrender would ensure the protection of his friends at Hogwarts, and render Voldemort virtually defeated. It is in this heroic act that Harry truly comes to understand and fulfill the other Bible verse presented in the final book, this one inscribed on his own parents’ tombstones, from 1 Corinthians 15:26: “The last enemy to be destroyed is death.” It is interesting to note that Rowling, a professing Christian, even said in an October 2007 interview that “on a very practical note, Harry was going to find biblical quotations on tombstones, but I think those two particular quotations he finds on the tombstones at Godric’s Hollow…they almost epitomize the whole series.”