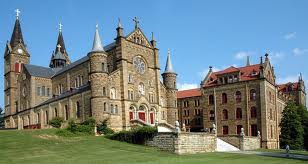 Tomorrow, at noon Central time, I’ll be taking my vows as an Oblate Noviate. Strangely, the Geek crowd is probably best equipped to understand what all this means. How so?

In Geek culture right now, Game of Thrones, comics, and nearly every paranormal book contains some sort of “monk” like order within their respected “world systems”. Some of these groups are forces of good and some, well, not so much. So, when I tell my fellow geeks that I’m becoming an Oblate Noviate with St. Meinrad Archabbey the reaction is, “That’s so COOL….uh…what is that? Do you get a sword or something?”

Not exactly, but those are fair questions. Before I answer them, I want to give a little background.

I grew up Catholic in Southern Indiana. Indeed, I’m related to about half of the counties of Spencer and Dubois counties. Most of my early life (from birth to sixth grade) was spent going to mass, being an altar boy, and attending Catholic school. My dad would often take us to the Abbey at St. Meinrad, not far from where he was born. 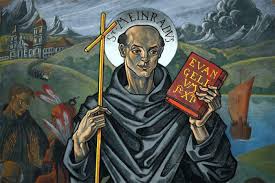 As you drive up the hill to the Abbey, a feeling of being displaced into another world overwhelms you. Stone buildings sit on top of a hill as a beacon of God. Somehow, even though the buildings are only a hundred plus years old, they look as if they’ve been there forever. Peace and quiet saturates the place providing a sense of calm that I can’t explain.

On a recent trip to the Abbey, I heard someone say, “Wow, it feels like Europe all over again”. For me, it’s more than just a feeling of being transported into another country. St. Meinrad is a “thin” place, a place where the seen and unseen worlds threaten to crash into each other. I feel God at the Abbey in ways I don’t feel Him anywhere else. The invisible world peeps through in ways that I find difficult to explain. The simple answer is that it’s a mystery of God.

Fast forward to now. In April, I resigned my ordination as a conservative Presbyterian minister, and gave up fifteen years of my life. In a story for another time, my time hanging out with atheists drove me back to the door of the Catholic church. As I said in my article I wrote at the time, I took a vow to step aside if I ever found myself out of accord with the system of doctrine in the church. I found myself no longer a Presbyterian in doctrine or conviction. Therefore, I stepped down from being an ordained minister.

This journey also led me to face my appalling spiritual life grounded in the lack of daily prayer. I realized all my spirituality was grounded not in God, but in my own arrogant assumptions. I came face to face with my tendency to hate authority of all kinds. I didn’t like people telling me what to do. Very often, I rebelled against authority just because I felt like it.  Rebellion against the World System on behalf of God is a great thing. However, very often, my rebellion became a way to make my self feel superior to other people. On a deeper level, my pain, anger, and frustration fueled a deep seeded need to give a finger to the whole world.

As I faced these basic facts about myself, I knew I needed a more structured system of prayer that required obedience, accountability, and a sustained history. The devotionals in your local Christian book store just wouldn’t cut it with me. Being who I am, I did a lot of research and found a concept that rang true in my soul; join a monastic community as an Oblate.

What is an Oblate? In medieval history, when boys would be offered to the monastery, they would take lesser vows to live and work like the elder monks. At some point, they had a choice to take the full on vows of poverty, chastity and obedience. In the passing years, men and women expressed their desire to become affiliated with the monks and nuns in their life of prayer. There was just problem; these people were married, had regular jobs, and children.

So, many orders (not all) of the Catholic church decided to formalized the position of Oblate into someone who took a vow of 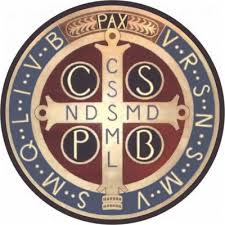 obedience, and pledged to follow the rule of St. Benedict in their daily lives. In other words, they would become monks living in the world and not in the community. They dedicated themselves to becoming involved with a specific monastic community, and living out their calling in their daily lives. Above all, they pledged to live a life of prayer and obedience to guide their own walk with God.

The process begins with a person taking Novice vows that last for one year. After this year of novitiate,  the person (man or woman), may take their full vows and renew them every year.

So, Saturday, I’ll take my novitiate vows and begin my year of discernment. To answer any more lingering questions, no, I’m not becoming celibate and no I’m not becoming a full fledged monk. Rather, I’m binding myself to a community, a system of seeking out God, and to learn how to be more obedient to the Lord.

That sums it up, really. So, pray for me as I take this step tomorrow. Reactions and questions below…..

January 2, 2014 Happy New Year! (Time to Get High?)
Recent Comments
0 | Leave a Comment
""I must confess, I HATE Christian radio. There are always exceptions, but more than ever, ..."
Krysia Berdinski DeGraaf Christian Music’s Authenticity Problem (or How ..."
"That's right my man. (Sorry to resurrect an old article) but it's still true. It ..."
▌Đeparture ▌ Christian Music’s Authenticity Problem (or How ..."
"We both share the same dilemma. We embrace our understandings of the Gospel and, therefore, ..."
JOB2001 Why Reformation Day is Dumb…
"Sorry for jumping to conclusions without knowing you! Regarding your dear aunt's fear, one should ..."
Truth Why Reformation Day is Dumb…
Browse Our Archives
Related posts from The Rogue