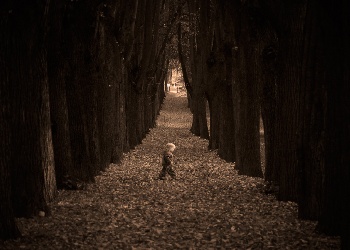 Prologue: Somewhere in the fields of Southern Indiana…

Imagine, if you will, a boy. There is always a boy or a girl in these sorts of stories. He is blond and skeletal thin, running across the large green field beside his house. Star Wars, the St. Louis Cardinals, and Jesus are all jumbled up inside his head. If you asked him, he could talk about all three with equal passion.

See him as he bikes around his small, Southern Indiana town. The world is alive to him, and somehow, he knows that God is behind everything. This simple faith is profound and beautiful.  He isn’t aware that he was born to a teenage mom and a dad who dropped out of college to take care of them. The boy doesn’t know that they sometimes survive on government cheese. He’s only aware that he eats egg sandwiches for lunch three months straight, and he’d give anything to have a fruit rollup included just once.

He knows that some of the people in his small town look down on him and his family for being poor. Most of the time that doesn’t matter because he still has baseball, books that fuel his scary imagination, and the arms of the Catholic Church. He lives for stories, lives for going to mass, and lives to explore the outer realms of his imagination. 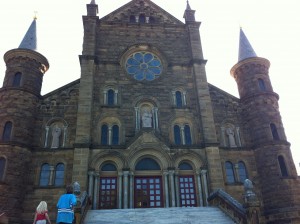 Oh, how he loves going to church. He loves going to mass every day, required of every kid who went to Catholic school. When he sits in the pew he stares at Jesus on the cross and wonders what it must have been like. He wonders, in a very Catholic way, what it would be like to hang on that cross, naked, exposed, and the darkness of the whole world resting on God’s human flesh.

One day, in a very innocent way, he lays out a wooden board on the grass. He outstretches his arms and tries to imagine Jesus’ pain. The grief, the sorrow, and the horror is too much for him, and the boy gets up and runs into the house. Tears stream down his cheeks.  He spends the rest of the evening playing baseball in the side yard, trying to erase the images racing through his brain.

Even though he is poor, he is happy. He loves playing outside all the time. He loves riding his bike all over town. He loves going to mass, the beauty, taking the sacrament, and feeling close to God.

Then, one day, his parents inform him that they will be moving to St. Louis. Even though that was scary, it was exciting. He would get to see the Cardinals in person! He would get over leaving his small town. The big city would change his life for the better.

What wouldn’t be so nice is that when his family arrived in St. Louis, his parents left the church the boy loved so much. They decided to attend a nondenominational, charismatic church, and it exploded his world. It devastated it, and in ways the boy, now a man, is still trying to recover from.

The new church was strange to him, and he didn’t understand the rules. Being a naturally insecure boy, he tried to fit in to the new hyper-spirituality surrounding him. He tried to speak in tongues. He tried to give prophecies over people, usually filled with doom and gloom. Instead of the humility that came with bowing his knees every Sunday at mass, every Sunday became a chance to pump up his own ego.

Still, he knew in the back of his mind that the charismatic church wasn’t quite right. Instead, he decided to attend a conservative Presbyterian college and then go to seminary. The Presbyterians turned out to be very good at doctrine, philosophy, and thinking about their faith with the mind. Indeed, the training that the boy received at their hands was invaluable.

However, he traded one form of spiritual pride for another. Among the Presbyterians, he became full of his intellectual 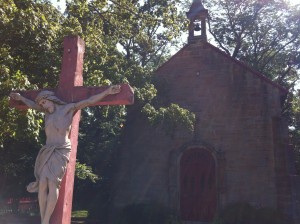 knowledge of the faith, rather than the experiential side of the charismatics. His professors, mentors, and friends praised his intelligence, thoughtfulness, and told him he would be an amazing minister. The boy, though unsure, took their opinions to heart.  None of them knew that the boy never felt at home in the Presbyterian Church. None of them knew he felt lost, alone, tired, and was just trying to make people happy.

The entire time, something whispered to him, something pulled at him, something he couldn’t define. If pressed, he would just say that he was nostalgic for his childhood, to feel safe, warm, and secure. In reality, it was more. Way more. The call of the Lord’s Body and Blood, the center of the mass, pulled at him strongly.

As he felt this tug, he tried to find it; but nothing worked. Not being a pastor of two churches, not being a speaker at evangelical conferences, nothing. He worked hard at being what everyone thought he should be, yet he disappointed them all. Somehow, he never lived up to the potential others saw in him. The boy felt their disappointment, and he withdrew into the darkness of his own heart.

After years of horrific ministry experiences, being battered about by well-meaning people, and left panting on the ground, the boy found himself among a group of atheists.

These atheists would change his life, and in ways they would never expect.

As you might guess, this boy is me. This story is my own. I’m sharing it so people can understand why I came back into the church that I love so much. I want people to know that I’m a Catholic and why. Many have questioned me, and indeed, severed friendship ties over my decision.  There are times when I get the feeling that people in my evangelical world think I’ve joined a cult. Not that anyone expresses outright hostility. They don’t have to, because their silence speaks for itself. Old friends never call anymore. When I do talk to them, I can hear the strain and the condescension in their voice. I’ve remained silent as to why I made the change, until my agent gently goaded me into telling my story.

So, for the rest of Lent, my Lenten sacrifice is to open up my heart and soul to tell my story. No matter how painful the truth, or how it might cast me in a bad light. All I can do is be honest before God and before others.

March 13, 2014 God's Not Dead...But Films Like This Should Be (Part 1)
Recent Comments
0 | Leave a Comment
Browse Our Archives
get the latest from
Entertainment
Sign up for our newsletter
POPULAR AT PATHEOS Entertainment
1