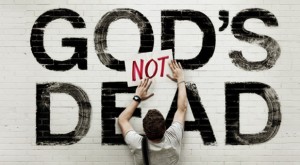 Back when I was in college at the dawn of the 21st century, Christian films were just starting to explode onto the scene. Sure, religious-themed films have always been around to some extent, but it’s been just under twenty years since the era of the “Hey, we’re just as cool as Hollywood…no, seriously, we are!” types of Christian films began hitting the market. You know, the kind of films that cause churches and ministry groups to gush in anticipation of a release date while acting like everyone’s gonna see it and get saved before the ending credits finish rolling?

My college years were a time period during which major cultural shifts took place, especially in the world of faith. As a result, during the late 90s/early 2000s, many churches and Christian groups essentially challenged students to look at college life through a sacred vs. secular grid. I’m not sure if this was the intention or not, but it certainly became the way my closest friends and I lived our lives. I felt obligated to listen to music classified as “Christian music,” refrain from most films, unless, of course, they were made by so-called “Christian” film companies, and only read books written by Christian authors that were released by so-called “Christian” publishers. To stray into the world of the secular, it was implied, would be to engage with artists who made evil and unredeemable music, films, and books.

This era also coincided with a widespread fashion fad that saw the abbreviation “WWJD?” (which, if you missed out, stands for “What Would Jesus Do?”) printed on everything from t-shirts, hats, and jewelry to bumper stickers, binders, and dorm room posters. What had supposedly been designed by a few individuals to wear as personal reminders of holiness quickly spread throughout the larger American Christian culture like a wild brushfire and became a new monster altogether. And yes, I’m loathe to admit, I sported it all. After all, as long as you wore WWJD stuff, what was the point in serving the poor, caring for orphans and widows, or bridging the gap Christians have hatefully created between themselves and the LGBT community? You know, that silly stuff Jesus did and told us to do too?

It’s now been eleven years since I graduated from college and what’s most interesting to me is that my current faith as a follower of Jesus has never been stronger, yet it’s filtered through a much different grid than the one I used in my early twenties. Over the past decade, I’ve been able to see God’s glory and redemption in all stories, films, and songs regardless of who wrote them. I’ve wrestled with doubts, worked through tough theological questions, and created works of art in both music and written text that cover a wide range of topics that would’ve perhaps been considered taboo during my college years. I even wrote a novel that includes sexual issues and some F words. It’s actually because of my relationship with Jesus, not despite it, that I feel free to explore and create with genuine, unrestrained honesty and authenticity.

Which brings me to this newest little chestnut, God’s Not Dead, an upcoming film about a college student (sigh) who is faced with the crisis of whether or not to follow his philosophy professor’s orders to sign a notice in class affirming that “God is dead” or face flunking the course. Naturally, he refuses, pissing off said prof, who then challenges him to a debate in front of the whole class, in which he must defend his belief that God is actually NOT dead through logical, rational, testable arguments. If you watch the trailer, this is when the chilling suspense theme ends and the cheesy Christian music takes over.

After my first full viewing of the trailer, a dull ache settled over my entire head. Mind you, I’ve seen some awful Christian-based movies (Left Behind, Fireproof, and even a hilariously dreadful little end times flick called Gone), but the difference between those types of films and God’s Not Dead is a pervading sense of us vs. them. There is little about the premise of this upcoming film that’s not antagonistic and stereotypical.

As if all of that’s not cringe-worthy enough, God’s Not Dead‘s plot is weaker than a turtle with muscular dystrophy. While it’s no secret or joke that people are tortured and killed around the world for their faith in Jesus, is this really what the filmmakers believe persecution has come to in America? Look, I’m willing to suspend my disbelief that a human-looking, English-speaking alien came to Earth from a fictional planet, gained the ability to defy the laws of gravity, and wears his underwear outside his tights while he flies around saving random people. But this plot? Sorry, no. In all my years in college, I had many professors who clashed with my Christian worldview (some who even told me so in blunt terms), but never did any of them ever say I had to sign a form disavowing my religious beliefs. There’s just no way that would’ve held up in an American liberal arts university. Profs can bully, shame, and belittle if they want to (though most really don’t care what you believe), but they cannot force you to put in writing that you believe something contrary to what you believe or fail you for refusing.

So yes, I believe this film is a terrible idea. From what I’ve seen and read, its storyline is not just poorly contrived, but also inflammatory and I’d even go as far as to call it malicious. When you get right down to it, who really “wins” a debate like this between the student and his professor? And what does the winner truly come away with? Pride? Bragging rights? At a time when Christians really ought to be thinking about all the ways we should be repenting of our own foolish words and actions throughout many areas of culture, certain film companies instead think it’s a better idea to make really bad art and parade it around as some sort of warped witnessing tool (at best), or as a kind of territorial threat display that we’re not gonna take it (at worst).

To be fair, I will be going to see the film on its March 21st release date. After that, I’ll bring you part two of my review. And yes, I promise to be honest. If I’m wrong, I’m prepared to issue a full retraction. Something tells me, though, that while I personally don’t believe God is dead, by the film’s end, I’ll probably be wishing I was.

March 19, 2014 JoJo's Hollywood Stories: Interview with Clark Schaffer
Recent Comments
0 | Leave a Comment
""I must confess, I HATE Christian radio. There are always exceptions, but more than ever, ..."
Krysia Berdinski DeGraaf Christian Music’s Authenticity Problem (or How ..."
"That's right my man. (Sorry to resurrect an old article) but it's still true. It ..."
▌Đeparture ▌ Christian Music’s Authenticity Problem (or How ..."
"We both share the same dilemma. We embrace our understandings of the Gospel and, therefore, ..."
JOB2001 Why Reformation Day is Dumb…
"Sorry for jumping to conclusions without knowing you! Regarding your dear aunt's fear, one should ..."
Truth Why Reformation Day is Dumb…
Browse Our Archives
Related posts from The Rogue