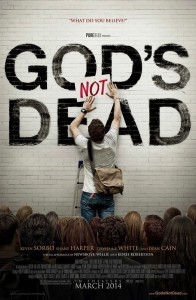 It’s official. God’s Not Dead, released by Pure Flix Entertainment, has been nothing short of a financial smash success, raking in over $8 million in its first three days. Opening in just 780 theaters nation-wide, the film made close to $3 million on its Friday release date alone, en route to cementing itself as the number three movie of the weekend.

I guess this is the part where I admit to being way off base in part one of my review, in which I offered some harsh reactions and assessments of the trailer and premise? A change of heart after actually seeing the film and coming face to face with its immediate success? Yeah, not so much…

This past Friday evening, I showed up at my local South Philadelphia cinema with my buddies, Perry, Skye, and Dan, expecting to be the only ones in the room. I, for one, was looking forward to kicking back with my feet up and being able to speak at a normal volume as though we were taking in a film from the comfort of my living room sectional. The first clue as to my prediction’s inaccuracy revealed itself when we opened the front doors to a long line of ticket buyers, all of whom – I kid you not – were there to see God’s Not Dead. Once we got our tickets and entered, the packed house required us to sit almost all the way up front. I mean, I haven’t sat that close at a movie since seeing Honey, I Shrunk the Kids when I was eight, an age when staring straight up for two hours didn’t cause massive neck pain.

After a few trailers – Christian films, of course; we can’t have secular Hollywood injecting its poison – we arrived at the main event. And boy, oh boy, it did not disappoint. To be perfectly clear, I loved God’s Not Dead the same way I loved Sharknado and Batman & Robin. The only way I can describe it is that this film was so bad, it was good. Campy, cheesy, and downright dreadful. In other words, all the makings of a really fun evening, if you’re with the right company (and I was). If I may, allow me to save you twelve dollars and give you a recap. Yes, these are spoilers, but is there a plotline to this film you’re really expecting to surprise and shock you? If so, stop reading. Right, didn’t think so. 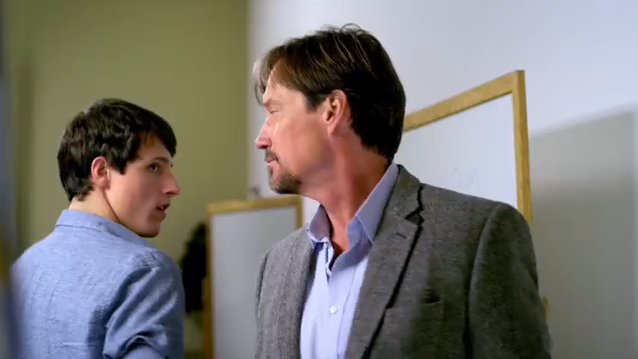 Josh Wheaton begins his freshman year of college along with his girlfriend of six years (it’s important that you know they’ve been dating since they were twelve after their “youth groups collided”). He presents her with two tickets to see the Newsboys (a recreation of their first date). In his very first philosophy class with Professor Radisson, Josh and his classmates are told, literally within the first minute, that belief in God stunts progress and are ordered to write “God is dead” along with their signatures on a piece of paper, and turn them in. In stomach-clenching, Daniel-in-the-lion’s-den fashion, Josh refuses, citing his Christian faith, and is challenged by his prof to a three-part debate on God’s existence, with the class required to act as jury, or fail the course.

Note: this is where the film should’ve ended with Josh simply calling the professor’s bluff for even thinking he could get away with something illegal like that, and threatening to report him to the dean. But alas, Christian films thrive on feeding illogical storylines to unimaginative audiences. Thus, the recap continues…

The debate pisses off Josh’s girlfriend who angrily forbids him to go through with it because, somehow, an academic exercise during their freshman year threatens the very fabric of their future together. As we see Josh prepare to take on the big bad atheist, we are introduced to the following subplots: 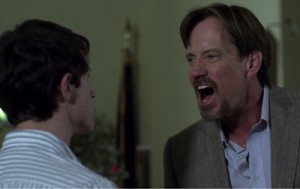 Each so-called debate portrays Josh as a master presenter of all things audio and visual. I mean, this kid clicks a button and sound, video, and text appear on the classroom screen with Hollywood quality and flair. This from a pre-law freshman, huh? And even though Josh never really argues any points that any intelligent atheistic scientist hasn’t heard before, each of his conclusions somehow leave Professor Radisson just a little more frustrated and frazzled. By the end, the goatee-clad, forehead-vein-popping teacher is goaded by Josh into answering the most unnerving question of all, “Why do you hate God?” to which he cries, “Because he took everything from me!!! I hate him!!!” As a result, we see Radisson is not really an atheist after all, but just isn’t too pleased with the Big Guy because his mother died when he was twelve. After Radisson’s meltdown, in the most vomit-inducing moment of the film, every student in the class stands up and…(wait for it!)…begins shouting “God’s not dead!” (causing almost everyone in the movie theater to cheer and whoop like we were watching an Arsenio Hall rerun).

The film then tries (unsuccessfully) to tie up several loose ends: the reporter with cancer turns to faith in God when she randomly enters the Newsboys’ dressing room on a whim (um, what??); Professor Radisson goes home, reads an old letter from his mother urging him to follow God, attempts to run on foot to the arena where the Newsboys are playing (again, um, what??), gets hit by a car, and turns to Christ right before he dies at the leading of one of the road trip-bound pastors (whose car only miraculously started moments before, leading him to that very intersection at that very moment); the Newsboys perform in front of every Christian who appeared in the film and offer a shout out to Josh for defending his faith in class (uhh, how the bleep did this touring rock band even know about what was probably a non-story to the local community?!); and finally, a guest appearance by Willie Robertson at the Newsboys concert (why not? plausibility went out the window long ago) in which he too commends Josh and then urges everyone in attendance to text their entire contact list with the words “God’s not dead” (because apparently, that’s what Christian witnessing has come to in America). The film ends, leaving the viewer with the aftertaste that if you share your faith and are willing to defend God’s name when it’s most uncomfortable to do so, you’ll be given the outward recognition you so rightly deserve, a stark 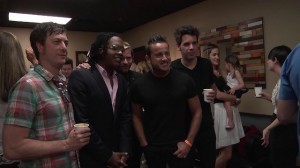 contrast to the Bible’s instructions to not seek the approval of man (Galatians 1) and to store up for ourselves treasures in heaven (Matthew 6). In Josh’s case, he’s patted on the back by an arena full of people, led by the very stars he came there to see.

Now, to be sure, even the worst films contain a few quality moments and God’s Not Dead is no exception. During Josh’s scientific rationale for God’s existence, I was pleased to see him present a worldview that supported the Big Bang Theory as having occurred possibly billions of years ago, instead of one that advocated for Young Earth Creationism. Additionally, the reporter, after learning she was dying of cancer, displayed believable and moving grief and devastation. Despite the film’s predictably subpar acting, that aspect was done well. In terms of production quality, God’s Not Dead‘s cinematography was probably the best I’ve ever seen in a Christian-based film. Unfortunately, however, those few bright spots cannot undo the larger issue of pathetically weak subplots that the filmmakers unsuccessfully hyperlinked into the bigger, just-as-poorly-contrived framework, creating a mish-mashed jigsaw puzzle of scenes that only served to make the whole story feel forced and extremely difficult to accept. 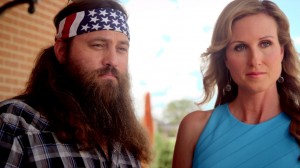 Perhaps the film’s most aggravating aspect is its enforcement of stereotypes. Josh’s girlfriend, a person he’d been with for six years and planned to marry, is portrayed as little more than a self-serving blond bimbo. A Chinese student, never without a tie and sweater-vest, has a ruthless father who angrily discredits any mention by his son of belief in God. An African American student is named “G-Dawg” (really??). And the Muslim girl who becomes a Christian is outed by her younger brother before her father beats her and throws her out of the house. At a time when much relationship-healing is needed between Christians and Muslims, the filmmakers’ decision to portray this Muslim father in such cruel fashion was asinine, stupid, and insensitive.

On a larger scale, the film generalizes all non-Christians as uninformed idiots with such lines as “You believe Jesus is God?” and “What’s a theist?”; as viscous vipers incapable of showing any compassion, empathy, or kindness (one scene shows the reporter telling her boyfriend she has cancer, to which he berates her for wasting his time and tells her that love is nothing but a silly word people use to get what they want in the moment); or as total conformists (I find it nearly impossible to believe Josh is the only student who would refuse to sign the “God is dead” sheet…surely at least a handful of other students would have refused strictly on the principle of not being forced to put their name to an absolute in an age of academic plurality and American freedom).

Simply put, God’s Not Dead is a terrible film. Somehow, the filmmakers, as well actor Kevin Sorbo (who played Professor Radisson) have it in their deluded minds that this movie will prove to be a winsome tool used to bring atheists and agnostics to a saving faith in Jesus. While I’d never be so bold as to say that can’t happen, I see this film doing much more harm than good. I needed only listen to the gloats of my fellow movie theater audience members to be reminded that the choir still loves being preached to and is willing to pay handsomely to keep that from stopping. The wedge of “us vs. them” is alive and well and continues to grow, in part, because of films like this.

At the end of the day, I have to hand it to Pure Flix Entertainment. They made a lousy product they knew they could market to a certain segment of the population due, in large part, to its Christian-celebrity factor. As a result, the company is now reaping the financial rewards. However, if I may borrow a line from a review of God’s Not Dead by Debbie Holloway (Assistant Editor for crosswalk.com), “our God is alive – and the ultimate artist. Doesn’t he deserve thoughtful, worthy art attached to his name more than just an on-screen-tract?”

Well said, Debbie, and I concur. But for certain groups parading around as artists, it’s just another happy day at the bank.

Alan Atchison is a Contributing Writer to The Rogue. He is a Senior Publications Editor at the Center for the Advanced Study of India (University of Pennsylvania), where he also earned a Masters of Liberal Arts in Creative Writing. He lives in Philadelphia, PA with his wife and two daughters. Follow him on Twitter and Instagram. Read Part One of his review of God’s Not Dead. 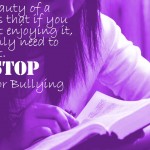