As a freelance book reviewer, I’ve read my fair share of books.  Who am I kidding?  More than my fair share.  And I must confess, I don’t always like what I read.  It happens. 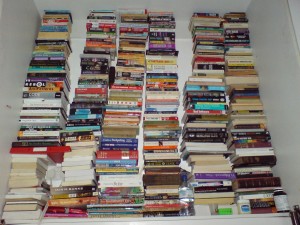 I used to force myself to finish any book that I had started, because books are an investment at $7.99 a piece, and like it or not, I had to get my money’s worth.  A funny thing happens though, when you become a book reviewer.  You find yourself in the midst of a mountain of books, most of them free for your reading pleasure, the only condition being that you post an honest review.  After a brief “learning period” where I tried in vain to read and review everything that crossed my To Read list, I quickly realized that I had become a quantity reviewer, not a quality one.

Queue the one-woman intervention.  I gave myself a pep talk, and cleared out my To Read list of everything that didn’t appeal to me.  Then I vowed that if I started a book, and I didn’t like it, I would simply move on.  Earth shattering concept, coming from an overachieving, do-or-die, “Momma didn’t raise a quitter” type of person.

There is a beautiful simplicity in being able to walk away from a book.  With so few unpleasant things in our lives that we simply can’t abandon even when our interest has waned, this was both freeing and empowering.  To this day, I’ve never written a negative review, much less a scathing one.

Recently there has been a lot of awareness being raised about Author Bullying.  It’s a real thing, look it up if you think I’m kidding.  Here’s what happens.  Someone either buys or downloads a book.  They read it.  They don’t like it.  Rather than walk away, the person takes to their nearest online outlet and writes a negative review.  Well that doesn’t sound too bad, I mean authors have to develop thick skin, right?  Well sure.  Except that recently, it’s becoming increasingly defamatory not of the book in question, but the author behind the story.  And it’s not stopping there.  I’ve recently spoke with an author whom has had threats made against her, simply because she commented on a scathing review in which she was very personally attacked.

The response became overwhelming.  Apparently pointing out to someone that not liking her work doesn’t warrant the attack on her person is a huge, tacky gaffe on her part.  How dare she, as the author, defend herself?  Further threats were made as others jumped to the defense of the reviewer, the situation escalated, and lawyers got involved.  It’s that serious.  Over a BOOK…  Five-hundred pages, on any one of which this “reviewer” could have stopped and said “This isn’t for me, I’ll read no more”, closed the book and moved on.  Take a moment to digest that.  I’ll wait.

So I ask a question to the perpetually negative and scathing book reviewers (those with several reviews, more than half of which are shockingly negative).  Would you punch a waitress in the face for bringing you something you didn’t like even though YOU ordered it?  Because that’s what’s going on here.  You’re eating the meal that you ordered even though you don’t like it, then punching the waitress who worked hard to bring you the meal.  Meanwhile, somewhere across this vast literary restaurant, plenty of other people have ordered the same meal that you did, and they liked it…  Maybe the “waitress” isn’t the reason why you didn’t like your “meal”, maybe the problem lies in the acid dripping from your tongue which prevents you from appreciating the culinary delights that have been laid before you. 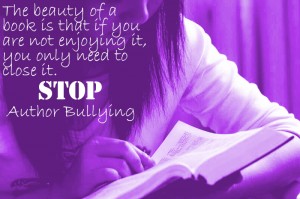 Reviews are an opinion based tool.  They help authors and readers find each other based off of recommendations.  Just because I don’t like a book, doesn’t mean I can’t recommend it to someone it might be better suited for.   Empathy goes a long way.  You wouldn’t appreciate if someone very publicly defamed your children.  An author’s book IS one of their children.  If you find the need to poke fun, malign or overly dramatize just how much you hated a book that you still somehow found the energy to finish, then may I suggest you’re reading the wrong genre, and perhaps you might have better luck in the Self-Help section two aisles (or clicks) down.    But that’s just my opinion.  Take it or leave it.

Melody Evans is a Social Media Manager for a family of healthcare companies and a freelance book review blogger for Up All Night Novels.  When she’s not  forgoing sleep in the endless pursuit of literary satisfaction, she can often be found diligently glued to her keyboard, seeking new outlets to express her love of all things geek chic.

March 24, 2014 God's Not Dead...But Films Like This Should Be (Part 2)
Recent Comments
0 | Leave a Comment
Browse Our Archives
get the latest from
Entertainment
Sign up for our newsletter
POPULAR AT PATHEOS Entertainment
1