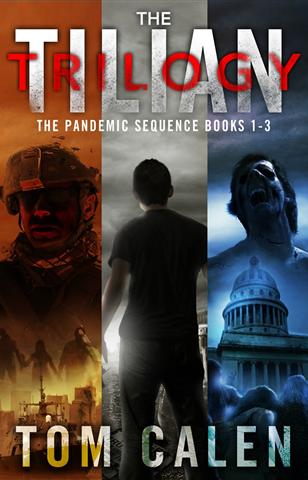 (As everyone knows, I just became a fully active (and proud) member of the Horror Writer’s Association. So, I thought it would be a cool way to celebrate Halloween by interviewing some writer’s from the HWA about the genre. Tom Calen has some great insights below…)

What made you want to write horror?

By the fourth or fifth grade, I had made my way through Poe and was on to Shelley and Stoker. About a year after that, I “borrowed” my sister’s copy of SILENCE OF THE LAMBS. I was blown away! It was the first modern horror/thriller I’d read and it hooked me immediately. Though I grew up reading the genre—everything from Anne Rice to Dean Koontz—the reality of writing a book of my own didn’t come until I was working in the business world for a number of years. I had job security and was making decent money, but there was a void. Eventually, I decided to give myself two years and see what I could do with writing. Well, it’s been four years now, and a small press has bought my first six novels, and I’m currently working on my seventh and eighth books.

My first experience with horror literature came when I was fairly young, maybe five or six years old. Edgar Allan Poe is one of my mother’s favorite writers, and she would read his stories to me at bedtime. She’s very expressive in storytelling, so she really brought the tales to life with character voices and dramatic pauses and the like.

How do you get your ideas?

Oh, they’re everywhere—which is sometimes a challenge because it puts the brain on overload. But, from the mundane to the extraordinary, there are stories all around us. Sometimes, it’s letting my mind wander and my thoughts crash into something interesting. Other times, it’s something I see on the news or hear in a song lyric.

What scares you the most?

Clowns. And I can thank the movie POLTERGEIST for that.

Tell us about your latest book.

I took a bit of a break from horror with my latest book, and wrote a sci-fi thriller. It was a project that had been simmering for a while. TORRANCE is the first book in the SCARS OF TOMORROW series (the second and third books come out in October and November, respectively) which deals with a future where some of our current conspiracy theories have turned out to be accurate. There’s definitely a commentary on consumerism and corporatism in the series that I found was more easily discussed in science-fiction than horror.

Why should people read horror?

I think the horror genre is essential because it pushes us to explore our psyche and those innermost fears that we tend to keep locked safely away. But like our sense of humor and our intelligence, our fears are part of who we are. I think it’s healthy to acknowledge our fears and let them run wild once in a while.

Personally, I prefer the more nuanced terror. You can look at something like King’s THE GIRL WHO LOVED TOM GORDON, which is nowhere near being a slasher, and your pulse races when you picture yourself lost in the woods. HOUSE OF LEAVES is another great example of using atmosphere and the unknown and the common fear of isolation to frighten.

September 22, 2014
Simpsons Executive Producer Al Jean: "Religion Will Be A Part of Character's Death".
Next Post

October 13, 2014 Horror Writer Goes in Seach of Michigan Dogman...Will Said Author Return Alive?
Recent Comments
0 | Leave a Comment
""I must confess, I HATE Christian radio. There are always exceptions, but more than ever, ..."
Krysia Berdinski DeGraaf Christian Music’s Authenticity Problem (or How ..."
"That's right my man. (Sorry to resurrect an old article) but it's still true. It ..."
▌Đeparture ▌ Christian Music’s Authenticity Problem (or How ..."
"We both share the same dilemma. We embrace our understandings of the Gospel and, therefore, ..."
JOB2001 Why Reformation Day is Dumb…
"Sorry for jumping to conclusions without knowing you! Regarding your dear aunt's fear, one should ..."
Truth Why Reformation Day is Dumb…
Browse Our Archives
get the latest from
Entertainment
Sign up for our newsletter
POPULAR AT PATHEOS Entertainment
1