Using the Shepherd’s Crook: Pope Francis Schools Evangelicals, the Media, and the Entire Catholic Church in One Sermon 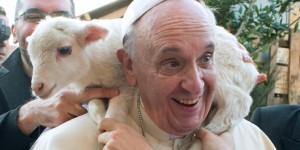 As a person going through a divorce, I took a deep, personal interest in the Synod on the Family. I was thrilled that my beloved church wanted to take a pastoral interest in the needs of its sheep.  I wanted to see good, sound and practical steps from the assembled church leaders on how to navigate the troubled waters of modern family life.

Sadly, the whole thing almost got derailed by the so-called “mid-synod” report. Conservatives screamed bloody murder at some of the released remarks (I’ve yet to understand their objections) and liberals danced a silly, “we won” dance across the pages of the media. Both sides showed a distinct lack of Gospel leadership and decorum.

The whole thing made me ill, especially as the Mark Driscoll saga reached its pinnacle last week. The controversial pastor of Mars Hill Church in Seattle stepped down in the midst of accusations of pastoral bullying, possible financial impropriety, and generally being a nasty person who should never have been a leader of a church.

In truth, his worst crime was his failure to be like Jesus and love his sheep.

I watched as this controversy split the Evangelical world. Conservatives screamed about all the Driscoll hate, while liberals like Stephanie Drury (Stuff Christian Culture Likes) crowed that “God’s work had been done”. Their greatest demon, Mark Driscoll, had fallen, brought down through his own arrogance and their unrelenting efforts.

One wonders what they’re gonna do since they don’t have Mark Driscoll to kick around anymore. I sometimes think that “pastor hunting” is the evangelical “blood sport”.

As I watched both controversies swirl, I felt sick to my stomach. The Catholic Church seemed in serious danger of following the shattered paths of evangelicalism. Conservatives screamed about liberal power plays, while liberals waved a condescending finger at those “African Bishops” who don’t know any better.

Please, dear Lord Jesus, I thought, don’t let it happen again. Please don’t let us forget that you told us that all men will know we are your disciples by the love we have for one another.

Pope Francis stepped in and showed what a True Shepherd of the Church  should do. He brought in his shepherd’s crook and corralled all the bleating (and biting) sheep. Papa Frank laid his pastoral hands on the church and calmed us all.

How? By simply preaching the Gospel.

Allow me to quote my favorite section of his sermon:

Personally I would be very worried and saddened if it were not for these temptations and these animated discussions; this movement of the spirits, as St Ignatius called it (Spiritual Exercises, 6), if all were in a state of agreement, or silent in a false and quietist peace. Instead, I have seen and I have heard – with joy and appreciation – speeches and interventions full of faith, of pastoral and doctrinal zeal, of wisdom, of frankness and of courage: and of parrhesia. And I have felt that what was set before our eyes was the good of the Church, of families, and the “supreme law,” the “good of souls” (cf. Can. 1752). And this always – we have said it here, in the Hall – without ever putting into question the fundamental truths of the Sacrament of marriage: the indissolubility, the unity, the faithfulness, the fruitfulness, that openness to life.

And this is the Church, the vineyard of the Lord, the fertile Mother and the caring Teacher, who is not afraid to roll up her sleeves to pour oil and wine on people’s wound; who doesn’t see humanity as a house of glass to judge or categorize people. This is the Church, One, Holy, Catholic, Apostolic and composed of sinners, needful of God’s mercy. This is the Church, the true bride of Christ, who seeks to be faithful to her spouse and to her doctrine. It is the Church that is not afraid to eat and drink with prostitutes and publicans. The Church that has the doors wide open to receive the needy, the penitent, and not only the just or those who believe they are perfect! The Church that is not ashamed of the fallen brother and pretends not to see him, but on the contrary feels involved and almost obliged to lift him up and to encourage him to take up the journey again and accompany him toward a definitive encounter with her Spouse, in the heavenly Jerusalem.

The is the Church, our Mother! And when the Church, in the variety of her charisms, expresses herself in communion, she cannot err: it is the beauty and the strength of the sensus fidei, of that supernatural sense of the faith which is bestowed by the Holy Spirit so that, together, we can all enter into the heart of the Gospel and learn to follow Jesus in our life. And this should never be seen as a source of confusion and discord.

How did the synod respond?  A four minute standing ovation with smiles of relief on everyone’s faces.  All the hurt feelings, false statements, and back biting washed away in the Gospel truths of Papa Frank’s message. This was the Gospel in action. This was Gospel of Jesus that the church guards. This was why I came home to the Catholic Church.

I have to confess, I cried a little and felt a huge sense of relief.

No matter where you stand on the issues presented at the Synod, Christ was glorified. No, not many issues were solved and probably won’t be for a long time. As a divorcing person, this is a bit hard to handle, but I will be patient.  My pastor, Pope Francis, has comforted me with Christ and I’m content with that. Let’s hope everyone else can be too.

The Gospel scorns the distinction of liberal and conservative. It laughs at those pathetic, naked rulers and pushes the church to a higher understanding of Christ’s love. The church will not be a slave to conservatives, who want to use it for a political power base, nor will Christ’s body be bossed around by liberals who think they know best because they are“modern” (whatever the hell that means).

Pope Francis showed us this fact in a profound way. Glory Be to the Father, and to the Son and to the Holy Spirit.

October 22, 2014 Ebolaphobia: Bullying Families Into Keeping Healthy Kids Out of School
Recent Comments
0 | Leave a Comment
""I must confess, I HATE Christian radio. There are always exceptions, but more than ever, ..."
Krysia Berdinski DeGraaf Christian Music’s Authenticity Problem (or How ..."
"That's right my man. (Sorry to resurrect an old article) but it's still true. It ..."
▌Đeparture ▌ Christian Music’s Authenticity Problem (or How ..."
"We both share the same dilemma. We embrace our understandings of the Gospel and, therefore, ..."
JOB2001 Why Reformation Day is Dumb…
"Sorry for jumping to conclusions without knowing you! Regarding your dear aunt's fear, one should ..."
Truth Why Reformation Day is Dumb…
Browse Our Archives
get the latest from
Entertainment
Sign up for our newsletter
POPULAR AT PATHEOS Entertainment
1