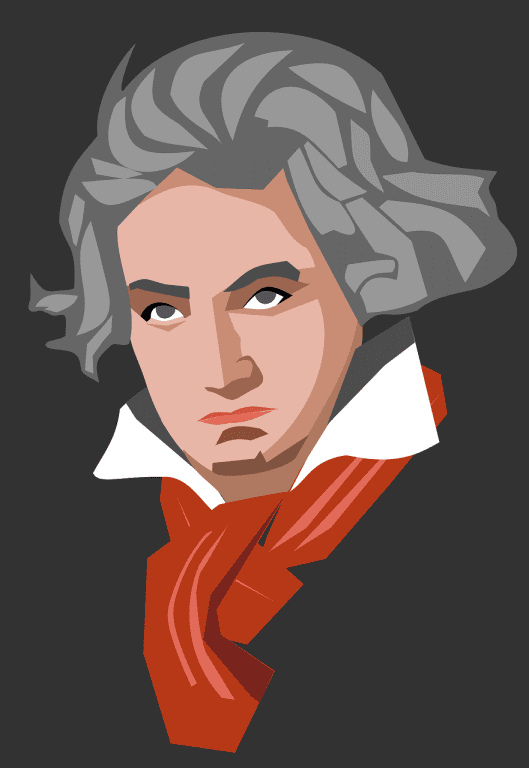 We blogged about canceling American literature.  A new effort to cancel Beethoven demonstrates that cancel culture is not really about race, sex, or gender at all.  It is about canceling culture.

The online magazine Vox has published an article by Nate Sloan and Charlie Harding entitled How Beethoven’s 5th Symphony Put the Classism in Classical Music.  Here is their thesis:

Beethoven’s Fifth Symphony starts with an anguished opening theme — dun dun dun DUNNNN — and ends with a glorious, major-key melody. Since its 1808 premiere, audiences have interpreted that progression from struggle to victory as a metaphor for Beethoven’s personal resilience in the face of his oncoming deafness.

Or rather, that’s long been the popular read among those in power, especially the wealthy white men who embraced Beethoven and turned his symphony into a symbol of their superiority and importance. For some in other groups — women, LGBTQ+ people, people of color — Beethoven’s symphony may be predominantly a reminder of classical music’s history of exclusion and elitism.

This sounds like the typical repudiation of artists who are “dead white males” on account of their failing to live up to the prevailing contemporary standards about race, sex, and gender.  But the authors say nothing about Beethoven’s attitudes on those subjects at all!

In fact, as Daniel Lelchuk points out in his response to this article entitled Then They Came for Beethoven, the great composer was quite progressive–even radical–for his time.  I am not aware of any conservatives who let Beethoven’s politics detract from their enjoyment and appreciation of his music.  For them, politics is not everything. Art, music, literature, and other things that enrich our lives have an aesthetic dimension that cannot be reduced to politics, much less to the power and oppression reductionism of contemporary critical theory.  But Sloan and Harding do not say anything about Beethoven’s political beliefs.

The reason Sloan and Harding charge Beethoven with being elitist and exclusionary is that his music, because of its structure and the way it is composed, requires close attention.  They say that when people would attend concerts of Mozart and other earlier composers, they would stand up, applaud, and cheer throughout the performance.  With Beethoven, that was not possible, or the audience would miss the music and its subtleties.

Concert etiquette, they say in their accompanying podcast, developed accordingly.  Soon, as today, audiences were obliged to dress up, arrive on time, and be quiet during the performance.

This etiquette served the values of white people and turned attending classical music concerts into an upper-class, elitist activity for the wealthy.  It became a class marker, setting apart the upper class from the vulgar masses.

But they themselves show that the etiquette evolved because of the nature of the music, not to signal class membership or to exclude anyone.

Furthermore, the criticisms of the “classist” nature of classical music are excruciatingly condescending and patronizing.  Are they saying that black people don’t dress up?  They obviously haven’t attended a black church, in which the congregation typically dresses much more formally and stylishly than is common in a white suburban megachurch.  And that black people don’t show up on time?  And that they can’t keep quiet?  Aren’t these offensive racial stereotypes?  Isn’t this racist?

True, classical music has become a niche taste, with little support from the mass commercial marketplace of pop music.  Thus it depends on the patronage of wealthy donors and a smaller cohort of musically-educated ticket buyers.  But don’t critical theorists disapprove of consumer capitalism?

Another musically sophisticated style of music with a similarly limited audience in the mass market is jazz, which also depends on donors, requires close listening, and has its own etiquette.  Jazz is a black art form, both in its origins and in its artists, though it also has a largely affluent and well-educated white audience.  But nobody is excluded, and there are lots of black jazz fans.  The audience can applaud for a solo, but they are still paying close attention.  Even in a club, it’s considered bad form to talk over a really good musician, reducing it to background music.  And jazz fans, who know a lot about music, nearly universally respect Beethoven.

October 1, 2020 The Racism and White Privilege of Critical Theory
Recent Comments
0 | Leave a Comment
Browse Our Archives
get the latest from
Cranach
Sign up for our newsletter
POPULAR AT PATHEOS Evangelical
1