WILLS POINT, TX – GFA World (Gospel for Asia) founded by K.P. Yohannan, has been the model for numerous charities like GFA World Canada, reveals in a new report: National missionaries — those working in their own countries — are the “new pioneers” of the 21st century, and they’re proving to be an “unstoppable compassion force,” a new report reveals. “More and more, local missionaries are driving ministry projects in their own countries and transforming their own communities,” said K.P. Yohannan (Metropolitan Yohan), founder of global mission organization Gospel for Asia (GFA World). According to GFA World’s new report, National Workers: Unstoppable Compassion Force, (www.gfa.org/press/workers) there’s a natural progression toward “indigenous” workers who understand their own culture, language, and neighbors far better than foreign missionaries.

In 2021, there were 430,000 foreign “expat” mission workers overseas, compared with 13.2 million national missionaries serving on their home soil, the report says.

National workers also serve in their own countries at far less expense — and with fewer restrictions — than expat Western workers who often incur costs associated with emergency medical insurance, security, and immigration, as well as safety restrictions on movement, says Gospel for Asia (GFA World).

It can cost between $50,000-$120,000 a year to support an American family in a developing nation — an annual sum that could help support 50 national workers.

“National workers live at the same level as the local people,” Yohannan said, “working alongside them, living among them in the villages and slums, dressing the same, speaking the same language, eating the same food, drinking from the same well.”

Today, 80% of the world’s countries are either completely closed or severely restricted to foreigners doing any form of religious work — Afghanistan being one example.

“Then again,” Yohannan said, “no matter what closed doors, restrictions or financial costs might be, God still calls his people to evangelize, to go, and send missionaries to preach the gospel and fulfill the Great Commission.”

Most Needy Places on Earth

GFA World’s national workers run projects in more than 12,000 parishes — or local churches — across Asia. And the organization is expanding into Africa as well.

Its workers complete a three-year training period before they venture full-time into some of the most needy places on earth, bringing clean drinking water through “Jesus Wells,” launching children’s education and health projects, helping poor families generate income, and sharing God’s love.

In South Asia, mission worker Rainer prayed for two years for a bicycle so he could encourage and help a cluster of villages nine miles from his home. Now his bicycle has become the local “ambulance,” transporting sick villagers to the nearest clinic.

GFA World’s Sisters of Compassion — teams of specialized women missionaries who serve in leprosy colonies — are uniquely trained in care and counseling. Geeta and her local co-workers clean the wounds of leprosy patients and wash their deformed feet.

“We do all this because of the love of God,” Geeta said.

Gospel for Asia (GFA World) is a leading faith-based global mission agency, helping national missionaries bring vital assistance and spiritual hope to millions across the world, especially in Asia and Africa, and sharing the love of God. In GFA World’s latest yearly report, this included thousands of community development projects that benefit downtrodden families and their children, free medical camps conducted in more than 1,200 villages and remote communities, over 4,800 clean water wells drilled, over 12,000 water filters installed, income-generating Christmas gifts for more than 260,000 needy families, and teaching providing hope and encouragement available in 110 languages in 14 nations through radio ministry. GFA World has launched programs in Africa, starting with compassion projects in Rwanda. For all the latest news, visit our Press Room at https://gfanews.org/news/.

Read more blogs on National Missionary Workers and Compassion Services on Patheos from Gospel for Asia. 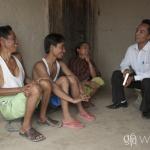 December 30, 2021 A Father Finds Hope and Healing for His Sick Daughter As He Befriends a GFA World Pastor
Recent Comments
0 | Leave a Comment
Browse Our Archives
get the latest updates from
What Motivates Us.
and the Patheos
Evangelical
Channel
POPULAR AT PATHEOS Evangelical
1