Why Scripture Compels Me to Affirm Gay Christians

Like Jesus, we are to love others not because of who they are, but because of who we are–all and equally the beloved of God. Once you allow and accept God’s utterly free and gratuitous love for yourself, you will almost naturally become a conduit of the same for others. -Richard Rohr

I went to ministry school with a girl who had been “delivered” from homosexuality. She still wore athletic shorts and a pixie cut, but apparently her gayness had been healed and she could suddenly love Jesus (and more importantly, be loved by Him) like the rest of us.

After graduation, my friend married a guy from our program who became a youth pastor. She was determined to act just like any other heterosexual spouse of a youth pastor, but she was secretly miserable as hell.

I’ve had heartbreaking conversations with friends walking through similar circumstances. Through their tears, each confessed that trying to “act straight” is like living in a prison of secrecy and fear. These aren’t kids. They are adults who are scared to death of being disowned by their families and ostracized by their churches and communities. And I can’t help but ask, “For what?”

It’s been several years since my friend’s marriage to the youth pastor dissolved, but our friendship has remained. She has slept on our couch and eaten at our table. We are her regular stopping point any time she travels from the Midwest to Florida’s coast. I’ve seen my friend’s heartache in walking through her painful situation.

I’ve also been privileged to see the redemption.

She has a new relationship with a beautiful woman, where both are cherished and respected. They are friends and equals, and neither needs to hide behind the unrealistic expectations of any person or institution. I love seeing the way my friend supports her partner and their children. She loves her as Christ loves the Church. I have never seen my friend more happy and whole than she is now.

For the longest time, I wrestled with whether I should support the gay community in the same way that I struggled with whether late-term abortion should be legal or capital punishment should be banned. Now I wonder, what was I thinking? How on earth did I justify lumping love and death into the same categories?

By arguing who’s right or wrong, I think we miss the point entirely. In our quest for Scriptures that support our personal holy wars, people are dying. According to the Trevor Project:

“Each episode of LGBT victimization, such as physical or verbal harassment or abuse, increases the likelihood of self-harming behavior by 2.5 times on average. And LGB youth who come from highly rejecting families are 8.4 times as likely to have attempted suicide as LGB peers who reported no or low levels of family rejection.”

If people believe the lie that their lives don’t matter – if they can’t find love or acceptance – it kills their soul, and sometimes their bodies. People don’t want to continue living in a world (read: a family or a church) where they aren’t known, accepted, and loved. I didn’t, and they don’t either.

For years, I have said my struggle is not knowing what I believe about homosexuality and Christianity. That’s a full-on lie. My struggle is not over what I believe. Rather, I have been scared to share my convictions honestly. I have feared being kicked out of fellowship in the Bible Belt if I defended gay people.

Like many of my LGBTQ friends, I have been afraid to come out and say I believe all people were created by a God who loves us all the same, and perpetuating hate and fear through destructive theology is not only hurtful, but sinful and just plain wrong.

I believe God is displeased with those who only offer love to people who look and act like them. To those who have been ostracized by these “loving preachers,” that kind of love feels an awful lot like like hatred. 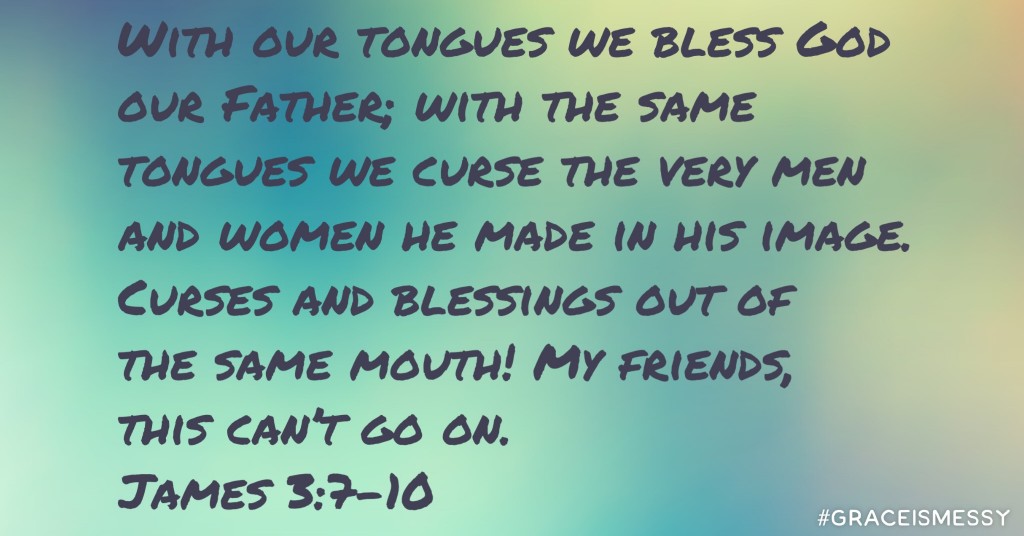 Jesus commanded us to love and love doesn’t come with a list of prerequisites. Grace doesn’t have criteria that must be met in order to be offered. It is more important that I love my neighbors than expect them to pass a litmus test on holiness or conservative Christian living.

‘Master, what are you talking about? When did we ever see you hungry and feed you, thirsty and give you a drink? And when did we ever see you sick or in prison and come to you?’ Then the King will say, ‘I’m telling the solemn truth: Whenever you did one of these things to someone overlooked or ignored, that was me—you did it to me.’ Matthew‬ ‭25:34-40‬ ‭MSG‬‬

Conservative Christians vehemently defend their views to justify hatred and fear of an entire people group. But if the church is to be the Bride of Christ, I’m afraid this shade of judgment is very unattractive on Her.

These days, I am learning to do better. I’m saying in no uncertain terms that I believe it is wrong for any group of people to be demonized by the Church. I will not stay quiet any longer.

Until now, I’ve been a coward. I was more concerned with my own acceptance and belonging in the local church than with offering love and acceptance to all of God’s people. I was wrong to hold back. I rejoiced in secret when SCOTUS ruled in favor of homosexual marriages, the same way that many whites in my hometown of Birmingham, Alabama, secretly celebrated school desegregation in the 1960’s. Those who spoke up were called liberals then, too.

When we’re talking about people who’ve had hatred and isolation thrown at them in the name of a God who offers nothing but extravagant love and grace and kindness to us all, I want to be a liberal. I want to be a liberal for the cause of Christ, because Jesus was certainly not conservative with his love.

We love because he first loved us. If anyone says, ‘I love God,’ and hates his brother, he is a liar; for he who does not love his brother whom he has seen cannot love God whom he has not seen. And this commandment we have from him: whoever loves God must also love his brother. 1 John 4:19-21

Once we stop arguing our dogmas long enough to see the person behind the labels – a human being who was intricately formed in their mother’s womb by God, who has an identity and a purpose in Christ, just as I do – all the cultural “norms” and political/theological debates don’t matter. 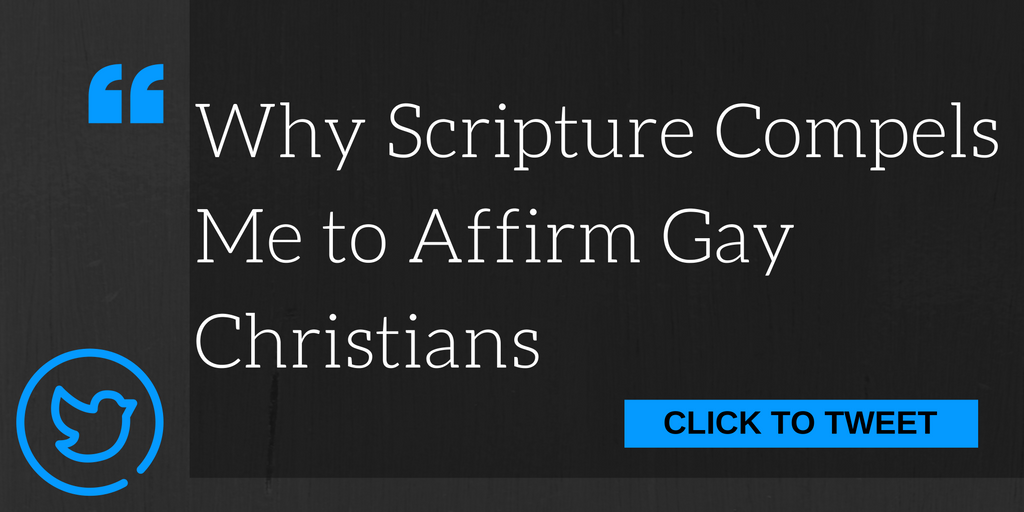 In James, the author issues a clear call for decency:

Don’t bad-mouth each other, friends…You’re supposed to be honoring the Message, not writing graffiti all over it. God is in charge of deciding human destiny. Who do you think you are to meddle in the destiny of others?

Any church-goer who uses the phrase, “abomination” or has the audacity to ask someone if they are a “practicing” homosexual has obviously lost touch with what it means to exhibit Christian charity and basic human decency.

I’m done referring to my LGBTQ brothers and sisters as “those who struggle with same-sex attraction,” as it implies homosexuality is something to be cured, stopped, or fixed. Who am I to meddle in the destiny of another? Aren’t they, too, created in the image of God?

I also can’t help but wonder who is actually following the example of Christ in the gay/Christian debate. One major point of Liz Edman’s book, Queer Virtue, is this: If we compare the incredible faith of LGBT people who desperately want into the church – people who ache to worship God, to contribute to Christian community, to invite others in – versus those who use their power and status to make sure faithful LBGTQ people remain outside of Christian fellowship, which group is doing the will of our Lord?

And can I ask you a question? When you think about encounters you’ve had with people who are preaching or protesting against gay people, have you ever seen any of the fruit of the spirit demonstrated there?

I’m not saying everyone who preaches or protests against LGBTQ people are as hateful as Westboro Baptist. Maybe you’re one of the enormous silent majority who continues to pass the hurting man on the side of the road, without as much as a glance in his direction. How often have you seen LGBTQ people who are desperate for someone to notice their pain and invite them in? But maybe, like I once did, in an effort to not ruffle any feathers or have yourself kicked out of fellowship, too, you opt for silence.

My friend, your indifference and your silence is screaming at those hurting people who are desperate to simply touch the hem of Jesus’ garment. As you stand silent, your unwillingness to carry them to Jesus is as much a roadblock as the man standing on the street corner, holding a GOD HATES FAGS sign.

Click CONTINUE to read the second part of this article and let’s continue the conversation in the comments! 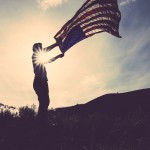 August 18, 2016
I Voted My Conscience for the First Time on Super Tuesday
Next Post 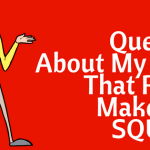