-Brennan Manning, All is Grace

The first question in my brand-new “Ask Steve” segment comes from a Twitter follower, who simply asked, “What is grace?” What a great question. In my years of religious fervor, that would have been the simplest question in the world to answer. “Undeserved favor, of course.” I knew exactly how to regurgitate Christianese on demand.

But how does the person who has started following Jesus as an adult answer that question? The one who wasn’t raised in church and doesn’t have all the knowledge – or baggage – the rest of us have? What is grace to the newbie?

I’ve been reading through the Gospels for the last couple of months. This is the first time I’ve done so in a very long time. Mark 2: 15-17 offers this example of grace:

Jesus and his disciples were at home having supper with a collection of disreputable guests. Unlikely as it seems, more than a few of them had become followers. The religion scholars and Pharisees saw him keeping this kind of company and lit into his disciples: “What kind of example is this, acting cozy with the riffraff?”

Jesus, overhearing, shot back, “Who needs a doctor: the healthy or the sick? I’m here inviting the sin-sick, not the spiritually-fit.”

My understanding is that other religions offer salvation by good deeds. You have to earn it. And most Christian denominations model this belief, too, even if they preach “grace by faith.” But Jesus taught and modeled grace as a free gift. According to the religious leaders of Jesus’ day, it would be unthinkable for a Rabbi to hang out with prostitutes and tax collectors, but Jesus didn’t play by the same rules. He healed on the Sabbath, ate leftovers from the sanctuary, and mingled with Gentiles.

What is grace? In many cases, it seems to be a going against the grain.

In John 14:6, Jesus says, “No man comes to the Father, but through Me.” Not good works. Not Scripture memory. Not by giving a tenth of your income to a local church. We come to God through Jesus. Not through our religion or performance-based Christianity. We come to God, and to faith, through Jesus alone.

The work Jesus did on the cross finalized our forgiveness. When Jesus died on the cross, he pummeled our punishment into oblivion and hurled hope toward Mankind. It wasn’t anything we did. It was all on His shoulders.

Then he went back in the meeting place where he found a man with a crippled hand. The Pharisees had their eyes on Jesus to see if he would heal him, hoping to catch him in a Sabbath infraction. He said to the man with the crippled hand, “Stand here where we can see you.”

Then he spoke to the people: “What kind of action suits the Sabbath best? Doing good or doing evil? Helping people or leaving them helpless?” No one said a word.

He looked them in the eye, one after another, angry now, furious at their hard-nosed religion. He said to the man, “Hold out your hand.” He held it out—it was as good as new! The Pharisees got out as fast as they could, sputtering about how they would join forces with Herod’s followers and ruin him.

In this portion of Scripture, Jesus reminded His followers that we are not subject to the Sabbath. The Sabbath is subject to us. It’s the same with religion. I’m the grace is messy guy, but that doesn’t mean I am anti-church or anti-religion. Much the opposite! I still engage with the church on a regular basis, but I no longer idolize it.

I believe the goal of the Church of Jesus is to be a community of broken people who are connecting with others and with God in the midst of our own brokenness. I don’t think Jesus ever envisioned a place where those who have “figured it all out” tell others how to be just like them.

Instead, we need a place where imperfect people wrestle with God, fully aware that doing so will, like Jacob, change them completely. Those who walk with a humble limp because they have wrestled with this mysterious God are the very ones who have experienced grace. Grace will take you just as you are, but it will not leave you the same.

This vulgar grace is indiscriminate compassion. It works without asking anything of us. It’s not cheap. It’s free, and as such will always be a banana peel for the Orthodox foot and a fairy tale for the grown-up sensibility. Grace is sufficient even though we huff and puff with all our might to try to find something or someone it cannot cover. Grace is enough. He is enough. Jesus is enough. -Brennan Manning, All is Grace

Church attendance, acceptance, and approval is not the goal of Christianity. Jesus is. Jesus is our goal, and grace is the path to Him. Grace for ourselves, and grace for others. So, what is grace? It often looks like unexpected kindness, a second chance for someone who has completely blown it, or a way to say, “I love you because of who you are, not in spite of it.”

*If you have a question about anything that falls under the umbrella of messy grace, email me! Steve@iamsteveaustin.com is my direct email address. I’ll do my best to answer your question candidly in an upcoming Friday segment of ASK STEVE!

October 6, 2016
Do You Hear Jesus Speaking in the Darkness?
Next Post 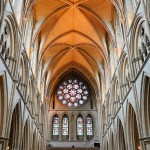