Day 21 is for Artemis, virgin Goddess of the hunt, daughter of Leto and twin sister to Apollon.  I chose the 21st because it falls 6 days after the full moon and the 6th day is sacred to Artemis.  In this sense, the 6th day is a traditional one for honouring Artemis, it just isn’t usually the 21st of the lunar month.  My calendar is set up differently to the usual Men Kata Theion which is divided into three parts.  This lunar month the 21st falls on the evening of the 9th of December and continues on through the day of the 10th.

Artemis is a virgin Goddess, because after She was born, She assisted Her mother Leto to give birth to Her twin Apollon.  That experience made Her vow to never give birth and endure such a thing Herself.  Despite this promise to never become a mother, She is a protectress of pregnant and birthing women – because of how She helped Her mother give birth.  Further, She is also the protectress of all girl children before they are marriage age, Her brother Apollon is the protector of boy children in the same way.

Artemis is the Goddess of the hunt and is followed by hunting hounds.  She is often depicted in a short dress, wearing boots and carrying a bow and arrow.  She is a forest and nature Goddess and Her retinue includes nymphai and some mortal girls, all virgins.

The myths of Artemis are so numerous that it’s honestly impossible to even recap them all here.  Suffice to say, She was part of the Titanomachy and Gigantomachy.  There are many stories about Her being wrathful but almost as many about Her favouring certain humans over all others.  She is a lunar Goddess, She rules over death and disease, but also health and healing.  She was the Goddess of the Amazons and is a Goddess of dance and music. Artemis is often conflated with Hekate and Selene, and They all share many attributes.

We begin with the usual Hellenic ritual forms, preparation, procession and cleansing with Khernips.  This is followed by the lighting of a ritual fire or candle/s, and the tossing of barley if you happen to do that.  Then we call on the Gods to attend the ritual.  Our first hymn and libation are to Hestia, then we say a hymn to Artemis, offer Her a libation, and offerings.  We finish with a final libation to Hestia.

Offerings to Artemis are honey cakes, fruits and nuts, and if possible well sourced game meats – especially deer.  But make sure it is well sourced and honestly this sort of offering is best if you hunted the animal yourself, so for most of us this is best skipped.  For libations, port and mulled cider or wine are most often suggested.  Frankincense is suggested for incense, birch, mugwort and cypress are also sacred to Her.

I call Artemis, virgin Goddess of the hunt,
Shooter of deer, with gold arrows never blunt,
Sprinting through woods, delighting in the wild,
Protector of labouring women, and every girl child,
Maiden of dance, thrilling voice booming to sing,
Rising into the sky, where hunting hawks wing,
And further into the dark heavens so high,
To your bright glowing moon, Selene on the fly,
That set to howl your hunting wolves and hound,
Who shadow you, prowling forests without a sound.

Drink whatever remains of the libation offering (if it is potable) and eat what is left of the offerings, it’s good to share a meal or drink with the Gods.  Spend some time in after ritual practice, for Artemis if you are able to hunt or practice archery then I would suggest that.  Most of us won’t be doing that, so I would suggest going for a run or doing some other exercise.  Spending time with young kids would also be good, or going for a simple walk in nature.

So this is the way I had planned my ritual to go, but it didn’t quite work out.  That evening I went to print out the hymn I was to use and my computer froze, to the point where I ended up having to set it to a previous restore point.  For some reason I couldn’t access the synced document on my phone, so I couldn’t use the hymn I actually share in this post.  Instead I ended up quickly modifying the one I used for the full moon ritual, omitting Hekate and just saying it to Artemis.

It wasn’t too bad in the end, the ritual itself went fine but I was and am still a bit disappointed that I wasn’t able to do the ritual that I actually wanted.  Ah well, one mess up so far this month isn’t too bad, and I can always do the proper one next month. 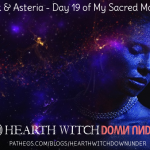 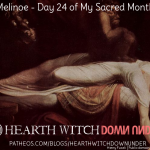 December 14, 2017 Melinoe Ritual - Day 24 of My Sacred Month
Browse Our Archives
get the latest from
Pagan
Sign up for our newsletter
POPULAR AT PATHEOS Pagan
1

The Heart of Fire, an Imbolc Prayer Based...
The Sacred Heart is a beautiful Christian prayer that I've adapted for...
view all Pagan blogs
Copyright 2008-2020, Patheos. All rights reserved.