Nyx and Asteria – Day 19 of My Sacred Month

The 19th day is for Asteria and Nyx, both night Goddesses, you could other night time deities into this one if you wanted to, and I may do so in future.  This is not any sort of traditional date but was chosen by me because of the reference in Works and Days that this day improves towards evening.  I figured, if it gets better at night, then it is surely for the deities of the night.  This lunar month the 19th day begins on the night of the 7th of December and continues through the day of the 8th.

Nyx is a Protogenoi, or Primordial God, which is one of the original deities who are more the natural forces of the universe rather than anthropomorphised beings who intercede in human or mortal affairs.  This is not to say They have no anthropomorphic forms or that They don’t interfere in mortal affairs, but more that They are less concerned with that sort of thing than the other Gods might be. The first Protogenoi came into being fully formed when the universe first came into being, They were the first of the Gods and the ultimate ancestors of the Gods and Titans, and technically all living creatures and beings.

As a Protogenoi, Nyx is not just the Goddess of the night, She IS the night itself.  Even when She appears in a humanoid form, She is still the night and cannot truly be separated from the night – unlike the Titaness Selene who, though seen as the literal moon, can also be seen as something separate from the moon.  When Nyx appears in humanoid form She is often depicted as wearing the stars, whether on Her clothing or on Her body (skin stars is likely modern).  Other times She is depicted as a winged Goddess, and/or pulling a chariot.

Nyx lives in the underworld, but of course She does not spend all of Her time there.  There isn’t much in the way of mythology or stories about Nyx, other than sometimes She is invoked for witchcraft.  Otherwise She is mentioned many, many, times in other myths in passing – generally as taking Her place in the sky and driving the sun away, the light away or greeting the day as it goes to rest.  There are also many mentions of Her offspring, which are numerous.  Some of Her offspring have no father, but were created and borne by Nyx alone.  Most of Her children are the “dark” Gods and Daimons, such as Hypnos (sleep), Thanatos (death), the Oneiroi (dreams), the Morai (fates) and more.  But She is also said to be the mother of Hemera, who is the day.

Asteria is the Titan Goddess of the starry night and night time divination and oracles, including dream oracles.  Not much is mentioned of Her as the starry night except in passing, much the same as Nyx is mentioned in passing as the night itself.  Most of Asterias myth revolves around her flight from Zeus, becoming the island of Delos and being the birthplace of Apollon.  And of course She is the mother of Hekate.

Nyx and Asteria are sometimes considered to be the same Goddess and in some literature it is hard to tell which is meant when named.  This is especially apparent when speaking of Hekate and Nyx being named Her mother – perhaps this is an alternative parentage, but perhaps it just Asteria being called “night”.

We begin with the usual Hellenic ritual forms, preparation, procession and cleansing with Khernips.  This is followed by the lighting of a ritual fire or candle/s, and the tossing of barley if you happen to do that.  Then we call on the Gods to attend the ritual.  Our first hymn and libation are to Hestia, this is followed by a hymn and libation to Nyx and another to Asteria.  We then give our offerings, and end with another libation to Hestia.

There isn’t much information on offerings, libations and the like when it comes to Nyx and Asteria, so we have to go with essentially guesswork followed through with divination to make sure we are not going to offer something offensive.  Alternatively it is generally safe to go with the generic offerings and libations.  Given They are night deities and thus related to the darkness (and star light) best guesses usually start with dark things, and night things.  Offerings of dark foods, dark drinks and night blooming flowers.  I like to offer, when it’s available, blue sambuca, dark chocolate, espresso coffee, and darkened cakes/cookies with white chocolate or other light coloured pieces to represent stars.

I call on Nyx, great primordial Goddess of the night,
Who greets the Day when taking Her from our sight,
Flowing across the sky, cloaked and robed in stars,
Drawn by sable horses, inside your darkened car,
Chaos born, dark mother, of protogenoi and daimons,
Winged blue-black Nyx, vanquisher of gods and men,
With gentle care you wrap all in your blanket of dark,
Bringing an end to all our sorrows, with your loving mark.  Pour libation.

Hail Asteria of happy name,
Of Ortygian and Delian fame;
Goddess of the starry night,
mother of the bringer of light;
Birthplace, saviour, transformed one,
Nurse of your sisters gloried son;
Island drifting with ocean tides,
Bring us dreams, of all that hides;
Attend our rites, heed our pleas,
Help us view what no one sees.

Drink whatever remains of the libation offering (if it is potable) and eat what is left of the offerings, it’s good to share a meal or drink with the Gods.  Spend some time in after ritual practice, being a ritual for the night Goddesses, night time activities would be a good idea – by which I mean things like night time divination, astrology for example, or even just something simple like gazing at the stars.

For this ritual I didn’t create a brand new hymn for Asteria, instead I used the one I created a month or so ago.  It’s still created by me though, so I think that I still counts as original – and I hadn’t yet used it in this ritual before.  The hymn to Nyx is brand new for this ritual, and I have to admit that it’s my favourite so far of the ones I have written.  I am not exactly the greatest hymn writer (also no poet if you can’t tell) but I really like the flow of the Nyx hymn.

This made the ritual even more enjoyable than many are.  While I almost always enjoy my rituals, when I use a self-written hymn I have that tiny voice in the back of my head judging the hymn as I say it which can sometimes provide a slight disconnect from the ritual.  I didn’t have that while reciting the Nyx hymn and it was a nice experience, to feel that confidence.

Add that to the fact that I love the night time more than any other time, and as such this ritual is surely perfect for me to do, this was a really good ritual. 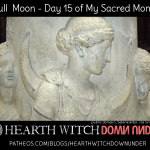 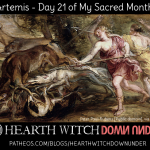 December 11, 2017 Artemis Ritual - Day 21 of My Sacred Month
Browse Our Archives
get the latest from
Pagan
Sign up for our newsletter
POPULAR AT PATHEOS Pagan
1

A Witch At Home - 13...
A Modern Traditional Witch
Related posts from Hearth Witch Down Under