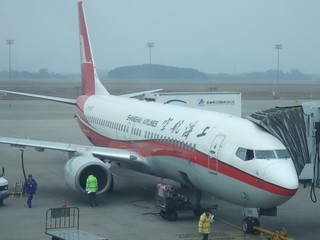 Here is a fun story that illustrates so well the ingenuity of the Chinese mind. Casey Chan blogged about a genuis man who used one first class airplane ticket to eat free for a year.

Airports are often terrible places to be. There are too many people rushing somewhere combined with too many cranky folks leaving somewhere mixed with annoying obstacles in the form of TSA security and rolling luggages. But it’s just like that for us normal folk. For first class flyers? It’s like being a rock star. One genius man took advantage of his rock star status and used one single first class airplane ticket to eat food for free for an entire year.

It’s an absolutely brilliant ploy. You see, when you have a first class ticket, you can stroll into the fanciest VIP airport lounge and grab whatever you want because once you’re inside that VIP lounge, anything you want—yes, including food—is free. ……

To see exactly how he did it, you can check out his blog.

I try to imagine an American doing this…. no way. An American would simply say, “That is too much trouble. Forget it.”

That guys is pretty clever. It makes me ask the question, “Are we this intentional in what we do?” The whole story reminds me of Jesus’ words in Luke 16:8–11,

For the sons of this world are more shrewd in dealing with their own generation than the sons of light. And I tell you, make friends for yourselves by means of unrighteous wealth, so that when it fails they may receive you into the eternal dwellings. “One who is faithful in a very little is also faithful in much, and one who is dishonest in a very little is also dishonest in much. If then you have not been faithful in the unrighteous wealth, who will entrust to you the true riches?

It’s challenging to us, however, to consider how we steward our own resources.

December 29, 2014
A question from an overwhelmed seminary student
Next Post