Did God Shame Jesus? The “Curse” of Gal 3:13 in Light of Honor and Shame

For some reason, few people seriously consider how honor and shame influence the biblical doctrine of atonement. Most scholarly writings are cursory theological treatments, not rigorous exegetical treatments. Fortunately, the tide is slowly changing.

In this post, I want to spotlight a noteworthy exception from a superb yet hard to access journal. A 2015 issue of JSPL published “Cursed by God? Galatians 3:13, Social Status, and Atonement Theory in the Context of Early Jewish Readings of Deuteronomy 21:23” (by Daniel Streett).

Whether or not you agree with Streett, his essay is well-argued and worthy of reflection. The following overview only highlights the main threads of his article. I conclude with a brief recap.

What does Galatians 3:13 say? The verse comes in the context of this paragraph:

For all who rely on works of the law are under a curse; for it is written, “Cursed be everyone who does not abide by all things written in the Book of the Law, and do them.” 11 Now it is evident that no one is justified before God by the law, for “The righteous shall live by faith.” 12 But the law is not of faith, rather “The one who does them shall live by them.” 13 Christ redeemed us from the curse of the law by becoming a curse for us—for it is written, “Cursed is everyone who is hanged on a tree”[1]—14 so that in Christ Jesus the blessing of Abraham might come to the Gentiles, so that we might receive the promised Spirit through faith. (Gal 3:10–14)

And if a man has committed a crime punishable by death and he is put to death, and you hang him on a tree, his body shall not remain all night on the tree, but you shall bury him the same day, for a hanged man is cursed by God.[2] You shall not defile your land that the Lord your God is giving you for an inheritance.

Streett summarizes what is common in conventional views of Galatians

They all assume that Gal 3:13 is describing the mechanism by which atonement or redemption from the curse is achieved. The mechanism is that Jesus vicariously takes the curse of God (or the Law) on himself. This, it is assumed, is what Paul means when he says that Christ became a curse “for us.” Further, all these readings assume that Christ was cursed by God or the Law simply by virtue of the fact that he was crucified. (p. 194)

He then challenges key elements that influence typical interpretations.

For example, he notes that “Deut 21:23 does not, in context, pronounce a curse on all victims of crucifixion (or hanging) ipso facto. Rather, the law explicitly refers only to those who commit a sin punishable by death…” Streett identifies several examples of people in the Bible and in Israel’s history who were “hung on a tree” (during execution or post-mortem). Nevertheless, Jews never reckoned them “(ac)cursed” by God or the Law.

Do traditional views overstate their case?

In an important footnote, he adds, “a blasphemer who was stoned and buried immediately was under no less a curse than a crucified blasphemer. Rather, the point of the law was to prohibit the cursed corpse of the blasphemer from being exposed overnight.” Elsewhere, Streett states, “If it pronounces a curse at all, that curse would only fall on those who had committed sins worthy of execution.”

Furthermore, scholars routinely dismiss a few features of the text. Significantly, Paul “omitted the Septuagint’s phrase ‘by God’ (ὑπὸ θεοῦ).”  The omission is utterly strange, even inexplicable, if Paul wants to make the point that Christ is cursed by God under the Law.

Does Christ become “shameful” in Galatians 3:13?

The article emphasizes the distinction between Christ being “accursed” and his “becoming a curse.” After recounting difficulties with the former, he explains how Jesus “became a curse,” which he says is a “status loss.” Streett offers an excellent survey of the biblical and extra-biblical evidence. From such passages, he summarizes,

… to become a curse is to become the object of society’s ridicule (γέλως) or reproach. It is to have one’s reputation so destroyed that one’s name becomes a stock element in jokes or curse formulas.

To become a curse, it seems, is to be thought by others (whether rightly or wrongly) to be under a curse. It is most important to note that one who becomes a curse is not necessarily cursed by God.

In a word, “One can become a curse without actually being cursed by God.”Jesus’ executioners, not God, heaped shame on Christ.

Once again, the biblical languages matter

I expect many people reading this post will counter, “Paul’s wording seems obvious. He’s referring to the mechanism of atonement.” On this point, we should pause to consider one of Streett’s most sophisticated arguments, which reinforces the importance of using the biblical languages. 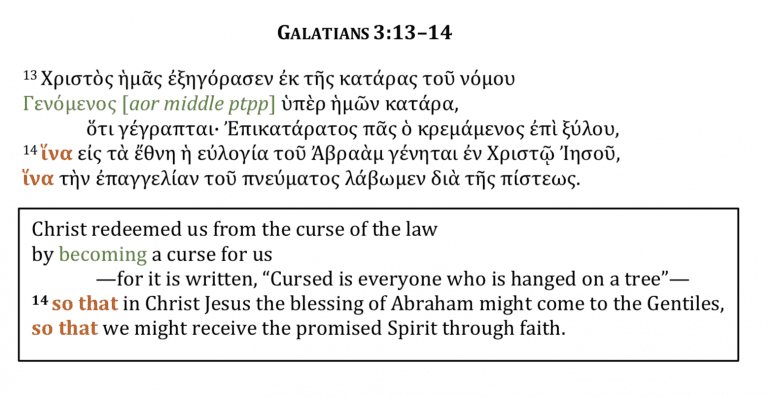 He compares the syntax (i.e., the arrangement or structure of wording) in Gal 3:13 with other passages. The similarities are striking and apparent in both Greek and English. For details, see below. For now, I’ll state his conclusion in brief: “He was willing to endure the false accusations and to suffer the heinous death attached to them in order to redeem his people from their slavery.”

In short, he supports his view in this way:

… nothing in the syntax of the passage demands that Paul’s statement be read as describing the mechanism of atonement. Rather, the closest parallel to our passage, which occurs only a few paragraphs later, in Gal 4:4–5, clearly points away from such a reading…. Few would argue that this text describes the specific mechanism of redemption or atonement. Instead, the focus is clearly on the magnitude of the Son’s voluntary condescension in order to redeem his people from their plight…

Here Paul’s flexible behavior is not the mechanism or immediate cause of gaining the weak (that role likely belongs to the preaching of the gospel or the illumination of the Holy Spirit), but is rather a necessary, though not sufficient, step to achieving that goal. He must condescend in order to reach the weak, but the condescension in and of itself is not salvific.

How Did Church Fathers Read Galatians 3?

Streett demonstrates how properly to use of the church fathers when making an exegetical argument. (I find too many commentators seem to grant the early church fathers a pseudo-canonical status.) He writes,

As we shall see, the church fathers are unanimous in rejecting the idea that Jesus was cursed by God, or that God needed to transfer the curse of the law to an innocent victim for salvation to occur.

Among possible sources, Streett cites Justin Martyr, Tertullian, Ambrosiaster, Epiphanius, Ambrosiaster, Jerome, Chrysostom, Hippolytus, and Augustine. In speaking of the curse, these early writings especially emphasize that Jesus became a reproach to the Jews, not God.

I’m certain some readers will be suspicious or slightly defensive after reading Streett’s interpretation. They fear he discards this or that doctrine, e.g., God’s wrath, substitutionary atonement, etc.

I urge people to consider Paul’s specific argument in Galatians 3, regardless of one’s theory of the atonement. Even if traditional Protestant interpretations of the atonement are correct, that would not necessitate this particular text to argue the case. It’s a dangerous thing to assume biblical passages are more explicit than they actually are.

October 31, 2018
Why has America grown more individualistic?
Next Post

November 13, 2018 Reciprocity, Collectivism, and the Chinese Church
Recent Comments
0 | Leave a Comment
Browse Our Archives
get the latest updates from
Jackson Wu
and the Patheos
Evangelical
Channel
POPULAR AT PATHEOS Evangelical
1