American Evangelicals and the American Apocalypse 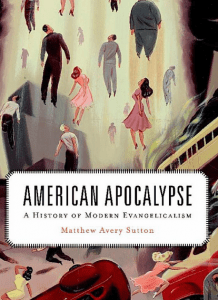 I was nurtured in the kind of American faith that was utterly convinced that the Rapture or the Second Coming — in essence, Judgment Day — was coming soon, if not very soon, and it was a good thing to be on the right side, which we were. While our pastor did not regal us with ramped apocalyptic sermons we had an annual revival that more often than not opened on the tense theme that tonight could be the night. So, get right with God now or it could be … doom and gloom for ever and ever.

At one of the deepest levels — far beyond what I perceived at the time — our apocalyptic faith provided for us an all-encompassing story and explanation of where we were and where history was headed. Apocalptic, then, is a meaning-giving narrative that locates everyone in the story. We knew where we fit and where others fit into that narrative. Yes, it was a metanarrative.

That topic became an intense intellectual curiosity for me in my college days and I swung from the kind of Pre-Rapture scenario one found in folks like Salem Kirban or Hal Lindsay to a more analytical approach that got me into plenty of intellectual scuffles with friends and pastors. I found Robert Gundry’s post-tribulation rapture approach, if not compelling, at least far more reasonable.

How important is apocalyptic thinking to American evangelicalism? What’s your belief: Is it central, integrated but not central, or peripheral?

Enter Matthew Avery Sutton, American Apocalypse: A History of Modern Evangelicalism (Belknap/Harvard, 2014).  Like Molly Worthen (Apostles of Reason, see here), Sutton isn’t simply repeating the standard story, and if these two recent scholars mark the future for studying evangelicalism, the old story is soon in for some serious revisioning. Worthen contends that while the Reformed folks control the evangelical institutions and powers, there are other just as important themes/groups: the holiness-Wesleyans, the Anabaptists, and the Restorationists. Now a confession: more and more I’m convinced “evangelicalism/fundamentalism” as a movement is inherently political and often enough more political than theological or ecclesial. Sutton confirms my confession; Worthen less so but at least what she calls the reformed flank is quite political.

Sutton offers another serious challenge to the Marsden-Carpenter line of thinking, which argued that fundamentalism was at work in the public sector, it fell into silence, and then arose again after WWII with Carl Henry and became evangelicalism. (This is the story I have myself believed for a long time.)

Sutton offers five correctives to the standard story, which I have time enough for today, but I begin with his categorical terms:

Evangelicals are Christians in the Reformed and Wesleyan traditions. (He’s with Worthen more or less.)

Fundamentalists are white, Anglo-American radical evangelicals who in the 1910s formed a distinct interdenominational apocalyptic movement.

Marsden understood fundamentalism through temperament: an evangelical who is angry with someone; Sandeen understood it through the lens of millennialism and apocalyptic. Sutton favors Sandeen over Marsden. But his approach develops four counter measures to the ruling story:

1. World War I brought tension between radical evangelicals and their more liberal counterparts. Apocalyptic entered in an intense way.

2. The Scopes trial had little impact; Bryan was not a fundamentalist and did not deal much with personal conversion; the trial did not lead to a retreat.

3. Sutton thinks, therefore, there was far more continuity in the 20th Century than discontinuity. Fundamentalists never retreated. [I’ve heard this but never seen it argued much.]

They held remarkably similar views on issues of the state, the economy, women’s roles, African-American civil rights, organized labor, and popular culture. The principle change in the postwar era was one of effectiveness, growth in numbers of adherents, and public image. Their ideology and agenda remained consistent (xiv).

At the heart of the movement — fundamentalism-evangelicalism — was apocalyptic:

Fundamentalists’ and evangelicals’ confidence that time was running out defined who they were, how they acted, and how they related to those around them. This conviction inspired their production of a distinct religious culture and a distinct form of Christian cultural engagement that has impacted the world in profound ways. But how evangelical ideas will influence the twenty-first century is not yet clear. While evangelicals’ apocalyptic convictions have waned somewhat in the United States, the belief that the end is nigh is rapidly spreading through the Southern Hemisphere. What this means for the future not even the most prescient evangelical prophets can see.

April 23, 2015 Reading the Hebrew Bible as Christian Scripture (RJS)
Recent Comments
5 Comments | Leave a Comment
"'This renewal began first with the renewal of the people of God (chapter 5 or ..."
Kostya2 Putting the Bible Together
"In Christ, there is no Jew or Greek, male or female."
Silverwolf13 Go Home or At Home?
"I just started to read about Scot Mcknight! His arguments are good.However, I recommend Scot ..."
Yechan Namgoong Tim Keller under the Eye
"" if it be Your will" 1 John 4:14,15 says, 14And this is the confidence ..."
disqus_5T2jXBEN10 JesusCreed.org Blog Prayer
Browse Our Archives
Related posts from Jesus Creed