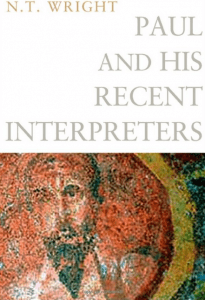 It may simplify but this formula may explain a major difference between at least the most widely-read version of the “new” perspective and the standard “old” perspective: Old Perspective scholars are soteriologians while the NT Wright version of the New Perspective makes him an eschatologian. I am re-reading NT Wright’s Paul and His Recent Interpreters and the chapter called “The Old is Better” (a phrase captured from the Bible by RH Gundry in his very early critique of the new perspective theory of EP Sanders) may be one of the most enjoyable romps through Pauline scholarship I’ve ever read.

Unless, of course, you’re an old perspective sort. Wright names names (e.g., he gets after Carson, Stuhlmacher, and Westerholm in this chp) and gets after it in this chapter. The chp takes on criticisms of the new perpsective — and Tom focuses on those made of him, which makes the chp even better since a sketch of the other would dissipate the focus.

It is not easy to survey surveys of scholarship but at least these points can be made.

1. The debate concerns the accurate description of 1st Century Judaism. The issue is how much of the descriptive themes — e.g., relationship of faith to works in final salvation — have been drawn from Christian Protestant soteriology and how much from what is organic to Judaism.

2. Final hope — here again the issue is to what degree the final hope’s very substance has been shaped not by Judaism but by Christian eschatological hopes. Judaism’s hope is not “heaven” (as typically understood) but The Age to Come, which is not the same as the Christian hope, while the Christian hope distorts a Judaism looking forward to that.

3. Sanders made central to Judaism a “covenant nomism” but Wright thinks that very category emerges from Christian soteriological concerns and so thinks “covenant narrative” would be a more organic framing of Judaism’s central concerns — and the “problem” to which there is a “solution” is not so much soteriology in the Christian sense but a narrative in search of a Messiah and a kingdom. [I cannot exaggerate the significance of this point in Wright.] I now quote Wright:

Here is the point: it is actually the narrative to which the anti-newperspective camp are most deeply objecting. I do not mean that (in their view) they are being offered the wrong narrative, and want to get back to the right one. They are being offered a narrative, an historical story whose hope of ‘salvation’ lies not in a flight from history but in a great convulsive change within history, a transformation in which there will be continuity with the present as well as discontinuity. That is what they do not want at any price. Until we recognize, name, and flesh out the narrative of the covenant, as it was inhabited by many first-century Jews and in particular the Pharisees, all the debate about grace and works, about the exact balance between what God does and what humans do, about how all this contributes to ‘salvation’ will simply go round and round in circles, ending up with a lot more | footnotes and a lot less illumination (111).

And when we look at the narrative, which is of its very nature historical, even when it points to the final apocalyptic denouement (‘the end of days’, which is actually an allusion to Deuteronomy), we find the questions reframed in such a different way that much of the recent post-Sanders discussion of Judaism appears simply beside the point (112).

4. In a manner like Sanders yet different, far too much of the anti-new-perspective crowd is an anachronistic battle, as if 1st Century Judaism vs. Paul is a mirror of intra-Protestant theological arguments about grace and works. He says it this way:

The point is wider: the problem of ‘how our behaviour corresponds to the final judgment’ is already an intra-protestant dispute, which has been seized on by the guardians of the protestant traditions and projected back, via the post-Sanders debate, onto the first century (114).

Thus again, we need to think like 1st Century Jews not like medieval or Reformation Christians to comprehend the debate Paul was himself fighting. Until  we do this … well… “You might as well try to play Wagner on a tin whistle” (115). [Reminder of whether the sun is moving in an older work of Wright’s.]

That is why some (not all) of the anti-new-perspective brigade will stop at nothing to vilify, malign, slander and misrepresent anyone who has anything to do with the post-Sanders way of reading Paul. Any mud will do: you can suggest that some of us do not believe in Jesus’ atoning death; you can insinuate that we have no gospel to preach, nothing to say to a dying ‘enquirer’; you can declare that we are false shepherds leading the flock astray; you can accuse us of crypto-Catholicism or quasi-Platonic moral Idealism; anything rather than pay attention to the actual arguments, the refraining of debates, and above all to the texts themselves (115-116). [In a note Tom says all these things have been said about him.]

A well known professor and author at a well-known seminary has said at least once in a class that new perspective folks are not Christians. (Really now. Jimmy Dunn and NT Wright, the professor had to be saying, are not Christians?! What needs to be said in response has been said in the previous quote in the “mud.”)

Here is the point. Because of the way in which ‘justification’ has carried this large set of implications around with it, including a theology and/or experience of conversion; because of the way in which debates about ‘justification’ have regularly been covert debates about the Westminster Confession’s notion of a ‘covenant of works’ in which ‘righteousness’ basically means ‘goodness’ or even ‘merit’, with the only question being how the human lack of this ‘righteousness’ can be made good; because of the sense that all this relates directly and immediately to the offer of salvation, and that it actually overlaps to the point of identification with Paul’s ‘gospel’ – it has been assumed that when Sanders, Dunn and others speak of’ justification as playing a subordinate role in Paul’s thought they mean that conversion, salvation and ‘the gospel’ are of less relevance than was once supposed, that sin and forgiveness are not particularly important, and that new-perspective scholars can therefore be assumed to believe that Paul was interested merely in a sociological or ecclesiological struggle, to enable non-Jews to become full members of the ekklesia without having to be circumcised, and not in the life-and-death issues of human salvation and the personal conversion and spirituality which is assumed to accompany it. Hence the mud-slinging (116-117).

The issue is not if justification matters but where it is to be located in Paul’s thought — and new perspective scholars routinely contend it is not the center of centers, that an eschatological messianism is, and that beginning there puts justification in its proper place (as a doctrine that arises in contexts about Gentiles and Jews being part of God’s people on the same basis — something Westerholm himself admits). Ironically, “union with Christ” is more central and that is also found in Calvin himself. And others, some of whom who continue the irony by overplaying the justification card.

Enough now with the old vs. new perspective. We move next week to the apocalyptic Paul, which in most ways has completely endorsed a new perspective on Judaism and which therefore in important ways challenges (with the new perspective) the old perspective on Paul. Wright puts it right: “… anyone trying to be a Pauline exegete while still in thrall to Luther should consider a career as a taxidermist. Heroes are to be engaged with, not stuffed and mounted and allowed to dominate the room” (128).

November 11, 2015
Dickens Christmas is no More Christian than a Starbucks Image
Next Post