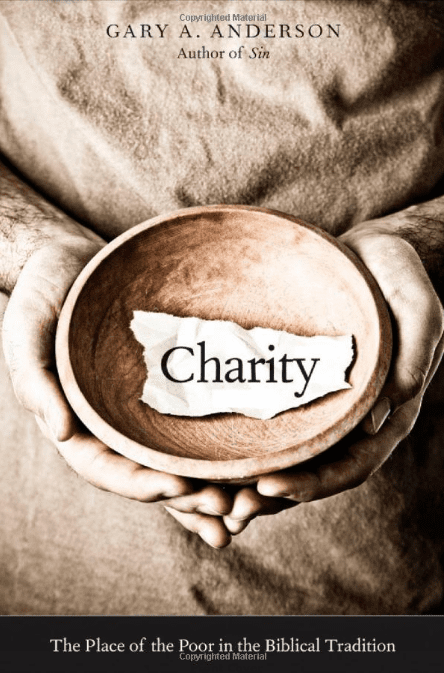 What was called almsgiving in the Hebrew Bible and the New Testament, what was throughout church history often called charity is now called compassion or social justice. A theology of charity divided with the Reformation — Catholics and Protestants understanding charity remarkably different — but it is worth our efforts to get behind the Reformation debates to a Bible-in-context understanding of charity. It might be worth asking Who gets it most biblically? The Catholics or the Protestants?

To ask this question I will examine the award-winning (CT nonetheless) book by Gary A. Anderson, Charity: The Place of the Poor in the Biblical Tradition. Anderson is both a brilliant Bible theologian but also an exceptional writer, though at times he swirls his readers into depths they did not expect or were not ready for — which is to say sometimes he assumes we know what he knows. His book Sin: A History is one of the most fascinating books I have read in years so I’ve been seeking for an excuse to read his Charity. Two other projects brought this book to the top of my stacks: (1) A. Stewart’s The Original Bishops, which sought to show that bishops (overseers) and deacons had a financial responsibility to distribute alms in the early churches, and (2) Verlyn Verbrugge, with Keith Krell, wrote before Verbrugge sadly passed away a book on Paul called Paul and Money, a book that Verlyn brought up to me when he edited my A Fellowship of Differents. (We differ on how Paul’s collection for the saints.) I wanted to read Verlyn’s book — and now have it to read when I’m done with Anderson. Add to this the reality that “charity” is on the rise especially among evangelicals (many want to be Social Democrats) and that at times one hears tones of reparations for the past and even “atonement” for systemic injustices — and, well, one lands square on Anderson’s book.

Anderson’s book famously made the case that a theology of sin shifted after the Old Testament from the metaphor of burden to the metaphor of debt, so that if the former longed for release or for the burden to be removed the second metaphor looked to payment and reward. None of this was dangerous to meritoriousness nor did it threaten a theology of grace, but Anderson clearly laid the groundwork for understanding even the NT’s emphasis on rewards. In his study there he brought up charity and now he completes that work in Charity.

His concern is theological: what does charity say about (1) God and (2) the people and beliefs of those people who worship a God of charity? There are, he says, two problems in studying the ancient concept of charity:

1. Almsgiving in the ancient world funded a treasury in heaven that could be connected to the almgiver’s future redemption and atonement. Hence it was hardly altruistic, which runs against modern (and I would say at times highly exaggerated) sensibilities.
2. Almsgiving was deeply sacramental in the ancient world. In giving to the poor personally one made contact with God.

Why, he asks, were so many moved so much by Mother Teresa? Because she both embodied deep sacrifice for the poor(est of the poor) and she revealed the kind of world many want to indwell: one where utilitarian and governmental sponsor and relief are transcended in a world where others deeply matter and where charity is rewarded.

But he also sketches in a preliminary manner that charity is deeply sacramental: in the act of giving to the poor one meets God as God wants to be met in this world.

Protestants, thinking all atonement is met in Christ’s death and resurrection and that faith is trust, disconnected charity from the Eucharist (where it had been located in the history of the church) and from atonement or connection to God. This led, Anderson suggests, disconnection from personally giving to the poor and led more and more to relief agencies and governmental aid.

Protestants worried about the value of good works as compromising the grace that God had shown in Christ, whereas Catholics insisted that one must participate in that salvation through the sacrament of the Eucharist and the doing of almsdeeds (10).

This sets the agenda for further posts on Anderson’s important book Charity.

Has Protestant theology prevented Protestants from appreciating the sacrament of charity?