There are a lot of different camps clustered under this big tent known as Evangelical Christianity.The idea of Evangelicalism as a single tent is more a theoretical idea than a practical one, as I suspect there was never a place and time in which we great-great-great grandchildren of the Protestant Reformation when we were ever truly united. At this point in our history, if there ever was a tent, it has stretch to the point it no longer serves as much of a shelter those of us who still bear the uncomfortable identifier “Evangelical”. (Others of you may be reading these words with gladness from a place situated somewhere outside the tent, and may be tempted to say, “Good riddance to that circus tent”.)

There’s no need to go into great detail here about what has become evident about Evangelicalism: in a sort of reverse birth-pangs to its expansion through the 1960’s through the turn of the millennium, it is now contracting and some of its excesses are withering. The decline has exposed the places where we Evangelicals staked our tent pegs on shifting sand instead of solid rock.

So many of us have lived through church splits, been wounded at the hands of abusive leaders or mean-spirited behavior from those who are supposed to be our brothers and sisters, or been shaped by a subculture of cultural and political pugilism, which is an expression of flabby, unhealthy theology. And now, it seems that we may have hit the collective spiritual wall.

The language of hitting the spiritual wall of which is speak is normally used when speaking of the spiritual development of individuals. James Fowler’s book The Stages of Faith and Janet Hagberg and Robert Guelich’s The Critical Journey have been very helpful to me in learning to think through what discipleship looks like at different life stages. Below you’ll find a helpful chart that captures the essence of the way The Critical Journey describes spiritual growth and development: 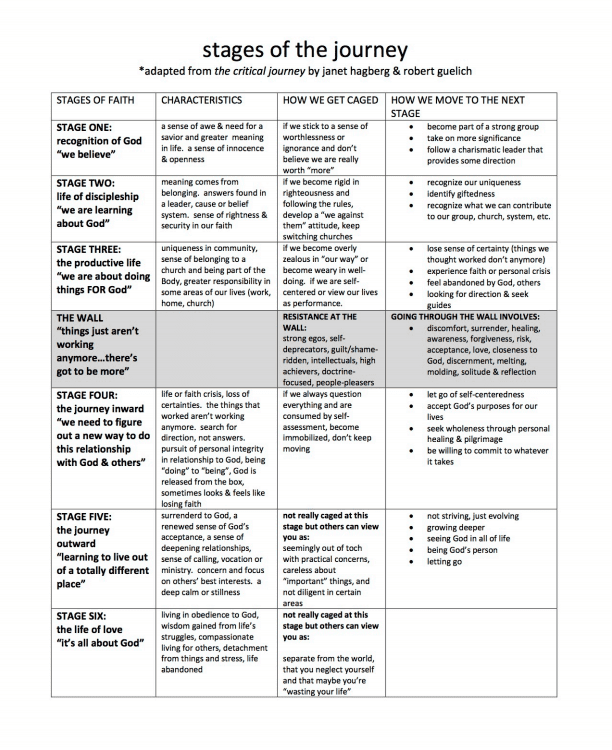 This framework was helpful to me as I hit my own personal spiritual wall at midlife. As I’ve moved through that transition in my life, I have recognized I left behind my former ways of relating to local congregations that seemed bent on busywork and/or cultivating a reactive way of relating to culture. As a young believer, I thought this was what being a Christian was meant to be, but that thinking is mercifully no longer a part of the way I relate to the local church now that I’m climbing down the other side of the wall.

Recent academic research about the Dones as well as my own informal survey a few years ago of about 500 people at midlife and beyond highlights the reality that many churches are geared toward helping launch people on their journey of faith, and are structured to best build and support people who are in stages 1–3. We are all at different places in our faith journey, which is why the work of writers like Fowler, Hagberg, and Guelich has been so meaningful to me. They’ve given me language to describe how growth works, as well as helping me to recognize the role the Christian community plays in cultivating (or hampering) that growth.

I do wonder if Evangelicalism as a movement has perhaps hit a wall of its own, too. The metaphor doesn’t entirely hold because of the wild diversity of this movement, and because a movement is made up of individuals, each in his or her own particular stage of growth with God. But it occurs to me that the rise of modern Evangelicalism, which really took hold among Boomers, has hit a wall at its own mid-life point. So much of what’s characterized us has been disparaged by those on the outside (and a few on the inside of that giant tent) as “mile-wide, inch-deep” Evangelical faith is another way of saying that we’ve cultivated a youth-oriented approach to faith that seems to flourish only on the beginner side of that wall. Evangelicalism has often celebrated a spirituality that seemed to hope we’d die before we got old, to cop a line from The Who’s anthem My Generation.

The shifts in our culture and the upcoming election have brought Evangelicalism at midlife to a wall of its own. The good news is that what gets deconstructed as we face the disorienting nature of the wall isn’t essential for where we’re going as kingdom people in this culture, anyway. If there was ever a time for us to face the wall and grow up, it is now.

October 18, 2016 Jesus, the Evangelists, and Modern Evangelists' Atonement Theories
Recent Comments
21 Comments | Leave a Comment
Browse Our Archives
get the latest from
Evangelical
Sign up for our newsletter
POPULAR AT PATHEOS Evangelical
1