Does the Universe Point to God? (RJS) 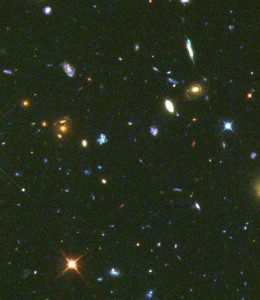 The second section of Alister McGrath’s book A Fine-Tuned Universe: The Quest for God in Science and Theology deals with fine-tuning and natural theology in the context of a number of scientific theories and observations. The first of these relate to cosmology and the fundamental constants of the universe.

It has been noted by many scientist that the universe appears to be fine-tuned for the existence of life. Many of the fundamental constants appear unconstrained in their values, yet have values that, if they were even slightly different, would lead to a sterile universe unable to develop life. This leads to the so-called Anthropic Principle which is expressed in two forms (p. 116): weak: “what we can expect to observe must be restricted by the conditions necessary for our presence as observers” (after all to quote Robert Dicke “It is well known that carbon is required to make physicists”(p. 122)) and strong: “the universe (and hence the fundamental parameters on which it depends) must be such as to admit the creation of observers within it at some stage.“

This observation does not provide a deductive proof for the existence of God, and certainly does not demonstrate the existence of the Christian God. Yet it is consistent with Christian theism. And this leads to the question McGrath poses in his book.

Does God offer the best empirical explanation for the anthropic phenomena, the fine-tuning of the universe for our existence?

For those who are interested, the development of our understanding of the nature and origins of the universe is a fascinating story. For an accessible introduction McGrath recommends a book by Amir Aczel God’s Equation: Einstein, Relativity, and the Expanding Universe and I concur. This is a fascinating and readable book. I picked it up on a whim at a bookstore many years ago, and couldn’t put it down. The title, God’s Equation, refers not to any theistic view, but to the fact that there is a relatively simple fundamental equation that describes the universe.

McGrath outlines three different approaches that are taken to deal with the anthropic phenomena.

First: The fine-tuning is nothing but an interesting coincidence. We are incredibly lucky – and if we weren’t, we wouldn’t be here to know about it.

The fundamental constants in question had to have some value – so why not these ones? They need possess no further significance. To give an example: the population of the United States is (over) 300 million. There is only one president. The odds of any one American becoming president are thus 1 in 300 million. But so what? It may be highly improbable that any given individual should be president, but it is a certainty that someone will be. At one level it is impossible to refute this argument. Yet it is clearly inadequate to account for the actualization of a highly improbable scenario: the emergence of a universe adapted for life. (p. 121)

Second: Observational Bias. The anthropic principle appears significant on account of the bias or location of the observer. This relates to the observation of a number of coincidences in the magnitudes of various quantities pointed out by P.A.M. Dirac. But these coincidences may simply point to a timing issue – these coincidences hold at the time and place where life develops, but they do not hold everywhere or at all times. Of course they are true here and now.

A related approach is taken by Nick Bostrom, who argues that any special features of the universe which we might observe are ultimately illusory, a necessary consequence of our restricted viewpoint. … Bostrom thus argues that the central error of much anthropic thinking concerns a failure to appreciate that it represents nothing other than an observational selection effect. (p. 122)

Third: We don’t have a universe, we have a multiverse. This approach is based on the inflationary model proposed by Alan Guth.

On this view, there exists a multiplicity of universes, so that the one we inhabit is an inevitability. We happen to live in a universe with these biologically friendly properties; we do not observe other universes, where these conditions do not pertain. (p. 123)

Because there was an enormous inflation in the intial formation of the universe there are bubbles completely separated from each other that we are unable to observe. The speed of light – our limiting communication channel – guarantees that we will never observe them.

Current interpretations of string theory suggest that the multiverse may consist of as many as 10500 sets of constants. In most of these domains, the sets of values inherited would be expected to be biophobic. However on probabilistic grounds, there will be some region in which the sets of values are biophilic. We happen to live in one such universe. It may be fine-tuned for life. But what of the 10500 others? (p. 124)

Some will go so far as to suggest that every possible outcome has been realized and as some universes are suitable for life at certain times, in certain places, it is inevitable that life will exist. We are back to the first option above. While it is improbable that any given universe will be hospitable, it is inevitable that some (at least one) will be.

McGrath points out that “at present the multiverse hypothesis remains little more than a fascinating yet highly speculative mathematical exercise.” He also suggests that while the multiverse is touted by some as doing away with the need to consider design or divinity, that the multiverse is fully consistent with the theistic understanding of God. It certainly doesn’t eliminate God as creator. We still have a universe created with the potential and potencies for our existence.

Back to Augustine and the general model found in his view of creation.

The fundamental picture that emerges from the contemporary view of the origins and development of the universe is that of an entity which came into existence and was virtually instantaneously endowed with the potentialities for anthropic development.

Augustine suggested that God created not by producing ready-made objects but by potencies and process. This is entirely consistent with the world we see. We live in a universe where it is possible (obviously) and inevitable that something like us would exist – the universe was created with the “potencies” for our development. Not in the way that Augustine thought – but nonetheless created and designed with intent using process to bring it about.

The existence of God is a reasonable empirical explanation for the data – but it is not the only possible explanation. I think that it is the best empirical explanation because it explains more than just the nature of the universe. But this is a faith statement. It is not a science statement. And I will suggest that this is the way God intends it to be. When we read the story in the Bible, the story of God’s interaction with his people two things seem obvious to me. First, the God of the Bible is interested in relationship and covenant. He does not knock people over the head and compel them to belief and obedience. Second, if the Bible is taken seriously, even incontrovertible evidence is insufficient to compel belief and obedience. This is a relationship.

What do you think? Does the fine-tuning of the universe for our existence point to God?

June 30, 2017 The Bible is Central 22
Recent Comments
20 Comments | Leave a Comment
"Many would say “biblical” and that, like forgiveness said C.S. Lewis of forgiveness, is a ..."
Doug Croze What is “Evangelical” Theology?
"Even if imputation is in view it is not the imputation of his life but ..."
John Thomson The Gospel and Double Imputation
"Fear is something dangerous, and it can direct your um curso em milagres youtube life ..."
burakdeniz The Miracles of Creation? (RJS)
"If Wilson limits his theology to what scripture explicitly states (and he does), then isn't ..."
Robert Zeurunkl The Subordinate Place of Supreme Honor: ..."
Browse Our Archives
get the latest from
Evangelical
Sign up for our newsletter
POPULAR AT PATHEOS Evangelical
1