A Book To Know About 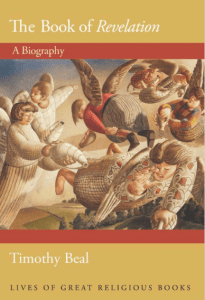 I love the series from Princeton called Lives of Great Religious Books.

So far I have enjoyed the following:

Ronald Hendel, The Book of Genesis

But this new one is beyond tempting to drop everything to read:

Timothy Beal, The Book of Revelation

Beal’s teenage world was mine:

I had tried and failed to read the actual text of the biblical book of Revelation. Like many before me, I got lost in all the overwhelmingly graphic descriptions of bloody, incredibly destructive battles involving myriad angels, gods, and monsters, all of whom I assumed carried symbolic meanings that were beyond my powers of decryption. For me, as for so many others throughout its history, Revelation was not so much a book to be read and interpreted as a simultaneously fascinating and disturbing multimedia mythosphere, a dense constellation of images, stories, and story-shaped images that scattered, overlapped and formed confused patterns in my religious imagination. …

Thus, I felt the little chill when my global, too-big-to-fail bank sent me a credit card with the number 666 as its security code.

In fact, there is a name for this fear of the number 666: hexakosioibexekontahexaphobia (Greek hexakosioi, “six hundred,” plus hexekonta, “sixty,” plus hex, “six,” plus phobia). This phobia is indeed prevalent in our Revelation-infused Western society. …

And, yes, in 2017 when religious studies professor Timothy Beal received a new credit card with the number 666 as its security code, he cut it up and closed the account.

This is gonna be fun.