It Is All Relative (RJS) 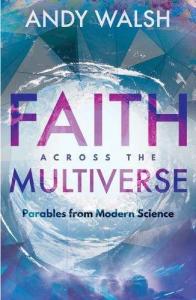 dy Walsh (Faith Across the Multiverse) uses examples from science to help us wrestle with complex ideas in Christian faith. This is a science and faith book of a very different kind; an enjoyable and thought-provoking read. Science is hard in part because it forces us to think differently – to abandon preconceptions or intuition based on human scale sizes and speeds. Christian faith also forces us to think differently. It challenges our “natural” intuition.

Today with Andy we turn to special relativity and connect this with Jesus, righteousness, and a way to think about our life as Christians (or non-Christians). This may be something of a stretch for many – it isn’t that modern science is buried in the Bible, but that relativity opens our minds to new ways of thinking.

The speed of light in a vacuum is finite and constant: 299792458 m/s (about three hundred million meters per second or one foot in one billionth of a second). It doesn’t matter if we are moving or standing still (an impossibility). The speed of light is not relative to the observer, time is relative. In science relativity isn’t a statement that all is relative, with no absolutes. In the move from classical Newtonian physics to relativity as Andy puts it: “We are not giving up a more absolute model for a more relative one, we are simply changing which quantities are absolute and which are relative. And we are doing so because the model better reflects  the reality in which we live, and provides an absolute point of reference of a different sort.” (p. 107) In physics, the absolute is the speed of light in a vacuum.

In theology we are not worried about the speed of light, but moral behavior is often of concern. The idea that morality might be relative raises concerns. Here Andy suggests that physics may help us think about morality.

If we are thinking about Jesus as the light of the world, perhaps Jesus has a similar special status when it comes to morality. … Jesus came to fulfill the law (Matthew 5:17), in a sense establishing himself as the standard for moral behavior, a shift just as revolutionary as the one from invariant space and time to invariant light speed. (p. 112)

We can learn much from Jesus’ approach to puzzles and questions, from his stories and actions. We also learn that try as they might, his opponents could find nothing to legitimately condemn him. They had to resort to mob rule and stories. Andy reflects: “The explanation for this inability to find fault with him, according to the Bible, is that Jesus did in fact live a sinless life and was the only person to have done so.” (p. 114) This leads to another connection – to help us think.

The only objects that travel at the speed of light are massless objects (photons). Any object with mass can approach the speed of light, but cannot reach it.  … “So what happens if we think of being sinful (having committed one or more sins) as having mass and being sinless as equivalent to being massless.” (p. 114)

Consider this as a model or metaphor, sin is like mass. Andy develops it more fully, but I will jump to the conclusion.

In this model, the moral perfection of Jesus is the optimal point of righteousness we are supposed to be reaching if we are choosing to follow Jesus. But this level is impossible to reach for anyone who has sinned, just as traveling at the speed of light is impossible for any object with mass. The diminishing returns aspect of trying to reach light speed resonates with biblical accounts of what it is like to be in the presence of God’s sinless righteousness; the closer we get, the more aware we become of the burden of our sins. Isaiah reacts to the presence of God by saying “Woe me! I am destroyed, for my lips are contaminated by sin” (Isaiah 6:5) (p. 117)

Although we can work to move faster (in a new space ship?) we can never reach the speed of light. Although we can pursue righteousness (and should) we will never reach it – and the closer we get the more apparent this will become. We will see our faults and flaws more clearly.

[The Bible] encourages good works and invites us to work at the process of sanctification, or approaching optimal righteousness in our own lives. But if we have any sin in our life, then we will only ever be able to approximate that righteousness, never fully achieving it in this lifetime, just as no amount of energy can cancel out the effect of an object’s mass on its ability to travel at light speed. (p. 117)

Sin, past, present, and future is akin to mass in Andy’s model. An object with mass always has mass, a person who has sinned is a sinner (and that’s all of us) – even if on the right track, following and fearing God.

But there is hope in this metaphor – matter with mass can be transformed into massless photons traveling at the speed of light (Erest = mc2). “So to we can look forward to being transformed, leaving behind our sin, but retaining the essence of who we are.” (p. 118)

Andy ends by bringing the Higgs field and Higgs boson into the metaphor. Interaction with the Higgs field leads to mass.  Likewise, “Sin is relational, arising our of interactions. … Sin is only sin with respect to our relationship with God, and by extension to other people. It is not meaningful to  talk about sin outside of those relationships.” (p. 119)

We can pursue righteousness.

The ultimate victory only comes when we are transformed in the age to come through the grace of God.

January 29, 2019
O Yes, It Always Matters Where You Start
Next Post

January 29, 2019 Forget the Freeze, Think Taste of Northern
Recent Comments
3 Comments | Leave a Comment
"This article starts a series on what A Course in Miracles (ACIM) implies when acim ..."
burakdeniz The Miracles of Creation? (RJS)
"It is your confidence in these thoughts that needs pardoning and what causes absolution a ..."
burakdeniz The Miracles of Creation? (RJS)
"Scot, 1 Cor 16:15-18 asks the Corinthians to submit to the leadership of Stephanas and ..."
Richard Fellows Finishing Well With Clement
"I can only guess that they look at Trump as a kind of god like ..."
D.M.S. The Gospel of With Us and ..."
Browse Our Archives
get the latest from
Evangelical
Sign up for our newsletter
POPULAR AT PATHEOS Evangelical
1