Why you need the church to read your Bible

It’s easy to bash the church, and there are many that do. Of course most bashers are blithely unaware of the countless things they owe their battered victim, everything from doctrinal formulations they mistakenly assume are plainly explained in the Bible to holidays. What makes December 25 so special, anyway? You’ll need to consult the church on that.

I grew up around Christians who thought that all they needed for their spiritual life was a Bible. Not all of them, of course. But there were those who would be nothing shy of offended if you suggested they owed the church anything or needed it in any fundamental way. The old one-book-on-a-desert-island question was more than a game with them. It was their basic approach to theology — an individual and his or her Bible is all that’s necessary.

But to say that the Bible is the only necessary source for your spirituality or theological pursuits assumes you can actually read it. And it turns out you have the church to thank for that.

Keith Houston teases the story a bit in his book Shady Characters, an amusing and interesting history of punctuation. It may not be the single best book for your desert island stint, but it’s fun stuff for language geeks like me. Addressing our topic here, Houston says, “The emergence of Christianity . . . would change the face of written language on a grand scale. . . .” How exactly?

Whereaspaganism relied on oral tradition and its practices varied according to local custom, Christianity emphasized conformity and universal, written scriptures. If Judaism had been the prototypical religion of the Book, cleaving to the written Word of God, Christians embodied this ideal with unprecedented vigor, driving the evolution of punctuation as they built and consolidated a concrete, written dogma. After all, the Word of God had to be transmitted with as little ambiguity as possible. . . . As the new, wordy religion swept through Europe, it drove the development of much of what we take for granted in modern-day writing.

Monks, for instance, invented the paragraph. Archbishop Isidore of Seville gave us the period (or at least the modern use of it), ditto things like colons and question marks. What about spaces between words? You can thank British and Irish clergy for that one. Ever get annoyed by people who WRITE IN ALL UPPERCASE LETTERS? Thank Charlemagne and Alcuin of York, a monk, for a lowercase alphabet. In other words, all the things that make text readable and understandable.

Irenaeus, living before the benefit of these developments, offers an example of why they are so important. The gnostics misread Paul in part, he said, because they didn’t understand the apostle’s phraseology or include the necessary pauses where appropriate — problems greatly mitigated by commas (Against Heresies 3.7).

Of course once in use commas and other grammatical tools had to be applied correctly. Who’s to say where a line should break into a phrase, sentence, or paragraph? Church tradition dictated that as well. While chiding the gnostics, Irenaeus said they failed to listen to the proper reading in church — that is when a deacon or priest would read a passage from the lectionary, providing the correct sense of the passage by adding pauses in the right places. Those more or less standard readings eventually were cemented into place as punctuation became widely employed.

So the next time you think you can have a go at the faith without the great mass of believers who came before, imagine sitting on your desert island, sifting through line after line of that beloved Bible without paragraphs, periods, question marks, and all the rest — or even knowing the right place to put them all even if you had them.

You’d be better off with G. K. Chesterton’s suggestion of one book to have if stranded on a desert island: Thomas’ Guide to Practical Shipbuilding. 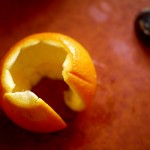 December 2, 2013
Why did God create us? Consider the orange peel
Next Post 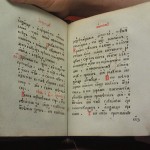