What Barton and Copeland get wrong about war and faith

In this video Kenneth Copeland and David Barton argue that soldiers returning from war should not suffer PTSD or self-condemnation because of their experiences. I know they mean well, but their treatment of the scripture is baffling.

“Look how many people in Hebrews 11 faith hall of fame are warriors,” says Barton.

But, no, not actually. Here are the individuals listed in Hebrews 11:

By my count, that’s 11 non warriors (69%) and 5 warriors (31%). Even if we count Abraham, Moses, and Samuel as warriors, Copeland and Barton are still way off. Last I checked, half is nowhere near “the whole thing.”

And whatever the tally, we should be clear about this: War is not the point of Hebrews 11. Not only are few actual warriors listed, but none are primarily lauded for their war making. The author says that he doesn’t have time to get into their exploits. In fact, war is only explicitly mentioned twice, once in reference to the battle of Jericho, which is mainly notable because the city’s walls were brought down by non-military action.

Regardless, in Barton’s reading Hebrews 11 somehow validates soldiers’ behavior in war. “Not only are you guiltless, you are esteemed and venerated,” he says. “And you need to get that vision of yourself.”

There’s every possibility that a solider could be guiltless, esteemed, and venerated. There are plenty of Orthodox saints who were soldiers. And we venerate them on a level that would surely unnerve Barton and Copeland. But like Hebrews 11, we venerate them for their faith — not bloodshed.

The point of Hebrews 11 is to show the centrality of faith in the church, among the people of God. It’s not about justifying military action, however right it might be in some circumstances.

The video above offers a good (if extreme) picture of what I talked about yesterday; we assume that since we agree with the Bible, the Bible must agree with us. We then see evidence for that agreement even when it’s not there.

January 10, 2014
George Orwell and bending the Bible for our own purposes
Next Post 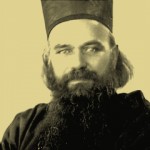 January 13, 2014 What we can learn from Nikolai the Serb
Recent Comments
2 Comments | Leave a Comment
"Thank you, I am a Mormon and my love for Jesus Christ is only surpassed ..."
Tina Beal Why Mormons aren’t Christians
"Two kings were about to wage war against King Ahaz. Isaiah comes along and gives ..."
Prizm Is the virgin birth really predicted ..."
"Praying three times a day is the Jewish prayer schedule. Blessing the Lord seven times ..."
Jennifer Lee Why pray the hours?
"So do you have any evidence that the Greek version is more authentic to the ..."
geoffrobinson You’re reading the wrong Book of ..."
Browse Our Archives
Related posts from Joel J. Miller