The Search for Excellence in Ritual 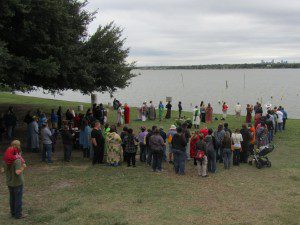 I love ritual – I always have.  I love its beauty and pageantry.  I love its power and inspiration.  I love the way it communicates on many levels using all the senses.  Good ritual is magic.

When I started practicing with Denton CUUPS ten years ago, I tried to learn as much as I could about how to plan and present good rituals.  Over the years I’ve put a considerable amount of time into learning from the best (what to do), learning from the worst (what not to do) and learning from my own experiences.  So when a major ritual in a public setting doesn’t go as expected, it’s time to take a very close look at what happened, why it happened, and what needs to be done differently next time.

On Saturday, Denton CUUPS presented the Cernunnos Ritual at DFW Pagan Pride Day.  As I said in the recap:

The energy was good, several people had strong experiences, and I got good comments afterward.  On the other hand, I’m not sure that was the right ritual for this setting.

Before I dive into analysis I want to be very clear what I’m saying.  The ritual was good.  We honored the God of the Forest and presented his message to a larger than expected group of people who are likely to be receptive to it.  We showed people what devotional ritual looks like.  We showed people what ecstatic ritual looks like.  We presented ourselves as competent ritualists.  The ritual clearly touched numerous people and gave them a taste of what Pagan ritual can be.  I’m proud of the work we did and I’m thankful for all the people who had a hand in making it a meaningful experience.

But I’m still not sure that was the right ritual for this setting.

As I was moving around the circle, both during the circle casting and during the unscripted portion, I saw a lot of confused faces.  Too many people didn’t know what was going on, or how they should respond, or if they even wanted to respond.  And so they didn’t.

From the very beginning of the planning stages, I knew this ritual would be done three times:  once for Denton CUUPS, once at the OBOD East Coast gathering, and a final time at DFW Pagan Pride Day.  Those are three very different groups and three very different settings.  Despite those differences, I thought with a few adjustments the ritual would work well in all three.

The CUUPS presentation was awesome and the ECG presentation was even better.  Neither was perfect, but perfection wasn’t the goal – excellence was.  But Pagan Pride Day had some significant differences.

The first two groups knew they were coming to the Cernunnos Ritual.  Even if they didn’t know anything about Cernunnos beyond “horned god” they had a clue what was coming.  I’m sure a few people at Pagan Pride Day were looking forward to this ritual, but most simply were at the site when it was time for the 4:00 ritual.  We expected that by 4:00 most folks would have left – at the planning meeting we figured we’d have maybe 40 people at the closing ritual and most of them would be experienced Pagans.  We had at least 80 in the ritual.  That’s great, but it’s not what we planned for.

This wasn’t a Self-centered (i.e. – to learn and grow and make yourself a better person) ritual and it was only secondarily a Nature-centered ritual.  It was a Deity-centered ritual and it was unapologetically polytheistic.  For folks who are new and are just learning about The Goddess or for Wiccans and others with a duotheistic view of the Divine, this ritual would have been unfamiliar.

The first two Cernunnos Rituals were held at night and they began with a procession.  This served as a walking meditation and helped get people in an Otherworldly frame of mind.  The PPD ritual was during the day and there was no good way to get everyone into a procession.  We held a procession of priests and offerings – it did a good job of attracting attention and drawing people into the circle, but it did nothing to focus them deeper into the ritual.

The CUUPS ritual was held indoors and the ECG ritual was held in a tight forest clearing.  When we processed in, everyone understood we were walking into sacred space – casting a circle was really unnecessary.  These were closed spaces – we were shielded from the mundane world and from prying eyes.  And from an acoustic standpoint, the building and the grove served to contain and echo the sound of the drums, the singers and the priests.

At PPD, the ritual was held in the open.  Sound was dispersed to all directions, making it hard to hear and harder to experience the drumming and music.  It wasn’t impossible, but it was harder.  And we weren’t in a private space – we were in the middle of one of the most popular city parks in Dallas.

In this setting, we asked people to respond to the Forest God with singing and dancing and shouting – to make themselves vulnerable.  To give a Christian example, this would be like taking a Baptist, a Presbyterian and a Catholic to a Pentecostal service and tell them to start speaking in tongues.  A few might get caught up in the spirit, but most would just sit quietly and watch.

OK, John, you’re the one who writes essays on avoiding common ritual errors and on the challenges of large public rituals – what were you thinking?

I was expecting a smaller, tighter group.  I didn’t expect everyone to jump in and start dancing, but I assumed most folks would be familiar with what we were doing.  I flat-out overlooked the open area vs. building / grove challenge.  And after two very successful presentations, I wasn’t particularly looking to make changes.

If I was doing it again, what would I do differently?  I wouldn’t change the theme – it began as a devotional ritual to Cernunnos and that would stay.  The main ritual at noon was a good introduction to Paganism – there was no need for another snake / spiral / circle dance.

Instead of holding the ritual in the open field, I think I’d move it under the trees.  It wouldn’t be a closed setting but it would help with the sound (though it might create vision problems).  That would also make it possible to get everyone into a procession.

I’d take out the unscripted ecstatic element and go in one of two directions.  I might invite people to make an offering  to Cernunnos, similar to what CUUPS did for Brighid at our Imbolc ritual this year.  That would be participative without asking people to be vulnerable.  It would need some tweaking to accomodate 80 people instead of 40, but that’s not hard to do.

Or I might go in the other direction and make it less participation and more presentation, similar to what we did for our Egyptian Summer Solstice in 2009 (which was also at White Rock Lake, just in a slightly different spot).  That would mean more decorations and tools – building a temple similar to what we did when we had to move the CUUPS ritual indoors.  It would also mean more liturgy.

Either of those approaches would have kept the same theme, but would have presented it in a manner more accessible to people who aren’t familiar with polytheistic worship.

Again, the ritual we presented and facilitated wasn’t bad and it certainly wasn’t a failure – any ritual that honors one of the old gods or goddesses in a public park in Dallas, Texas can only be considered a success.  Several people had a strong experience of Cernunnos, and at least 80 people saw what polytheistic devotional ritual looks like.  Perhaps some of them will be moved to begin private or group devotional rites to their own gods.  And the message of Cernunnos – that we are part of Nature, and that we will prosper together or not at all – was heard loud and clear.  Who knows what seeds were planted that may bear fruit in the coming weeks or months or even years.

But with more consideration for the differences in the venues and among the people in attendance, that message could have been delivered much more effectively.

I love ritual, I enjoy ritual, and I’m so thankful I have the opportunity to lead, facilitate and participate in ritual in such wonderful settings.  I’ve yet to have a perfect ritual and I doubt I ever will… but that doesn’t meant I’m not going to try to make each and every ritual as good as it can possibly be, for as many people as can be.

May the blessings of Cernunnos be always with us, and may we run with him, wild and free. 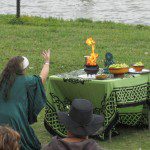 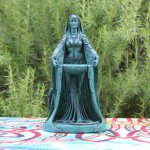 October 10, 2013 Danu
Recent Comments
12 Comments | Leave a Comment
"Maybe with the right theme music, we could be "The Spirituality With No Name.""
Pitch313 Why I Still Call Myself Pagan
"As problematic as Disney can sometimes be, Frozen 2 had a saying that I just ..."
Zzyzx Tell Me What To Do
"Not that you asked ME, Dan--LOL--but, fwiw, the word "worship" sticks in my craw, and ..."
Laurie The Gods And Nature
"IMHO: Pagan/Paganism/Paganry has become like "Christianity"— not the fear-based religion of control, but a sort ..."
Kyllein MacKellerann Why I Still Call Myself Pagan
Browse Our Archives
Related posts from John Beckett