The older I get the less TV I watch. It’s not a moral judgement (TV can be bad, but all things in moderation) and it’s usually not a conscious decision. It’s an unwillingness to risk spending time on something I may not enjoy. Most times that works out OK, but sometimes it causes me to miss out on things I would enjoy.

That almost happened with Wednesday. For some reason, I had it in my head it was a movie. I was willing to risk an hour and a half or so on it, but when I called it up on Netflix and saw that it was an 8-episode series, I almost backed out.

That would have been a very big mistake, because I loved Wednesday.

This review discusses some details of the new show, but it contains no significant spoilers.

Jenna Ortega’s performance is the fourth iteration of Wednesday Addams (not counting stage and animation). Charles Addams drew her as a small child in his cartoons, which began in 1938. Lisa Loring was 6 when she started playing Wednesday on TV in 1964 and 8 when the show ended. Christina Ricci was 11 in The Addams Family in 1991 and 13 in Addams Family Values in 1993 (where she stole the movie).

Jenna Ortega was 19 when Wednesday was filmed, and the series includes a celebration of the character’s 16th birthday. Wednesday is growing up, even if she’s taking half a century to do it.

But she’s still very much the Wednesday we know and love: dark, macabre, and anti-social. I can relate.

Tim Burton is the executive producer and he directed four of the eight episodes. The show looks and feels like a Tim Burton production, and that’s a good thing.

In previous versions of The Addams Family, some of the family members are… unusual, such as Cousin Itt and Thing (who plays an important part in this version). This show take that a step further. It’s set at Nevermore, a boarding school for “outcasts” that include vampires, werewolves, sirens, and other monsters of legend and lore. I’ve seen some people call this “Wednesday goes to Hogwarts” – maybe, but I think the Harry Potter comparisons end there.

If Jenna Ortega had a challenge following Christina Ricci (who plays a very different, non-Addams character in this series), Luis Guzman had an impossible task following Raul Julia, who was absolutely perfect as Gomez in the 1990s movies. And so Wednesday doesn’t try. This Gomez looks like the Gomez of the comics: short and fat, with protruding teeth.

I saw a fair amount of commentary on this before the show came out, including social commentary on why a few people complained about it. Honestly? I noticed Gomez’ “different” (“historical”?) appearance in his first couple of scenes – after that he was just Gomez Addams.

Catherine Zeta-Jones plays Morticia. Without spoiling anything, I didn’t like her in the first couple of episodes, although I couldn’t say if my complaints were with the performance or with the character as she was written. That changed in Episode 5, which explores Gomez and Morticia’s story when they were students at Nevermore. After that, I was sold: Catherine Zeta-Jones is Morticia.

What didn’t change is Gomez and Morticia’s mad, passionate love for each other, something that remains fun to watch – and relationship goals for all of us.

Gwendoline Christie is excellent as Principal Weems, who is very unlike Brienne of Tarth or Captain Phasma or Lucifer Morningstar. Emma Myers plays Enid, Wednesday’s roommate at Nevermore, who shows that “perky” need not mean “shallow.” Myers’ looks and delivery remind me of Alyson Hannigan in the early seasons of Buffy the Vampire Slayer, although Enid is a very different character from Willow.

As the lyrics to the TV show’s theme song say, the Addams family is kooky. Mysterious and spooky, yes, but in a lighthearted way. No one is ever really harmed by the cartoonish violence.

This is a darker story. People die… Gomez is accused of murder… conflicts between “outcasts” and “normies” could be taken from today’s newspaper. The bizarre humor is still there, but there’s a serious tone to the show.

Wednesday needs to grow up without giving up what makes her Wednesday.

The good news is that she does.

That’s why I enjoyed this show so much. Wednesday is an outcast among the outcasts, but she’s OK with that. She doesn’t make friends easily, but when she does they’re family and she’ll do anything for them. And when she realizes she hurt people she cares about, she changes her behavior without changing who she is.

I need to say something about the music – it’s excellent. On Monday I was working from home and having a difficult day. My wife was downstairs, rewatching Wednesday. The volume on the TV was just right – I couldn’t hear the dialogue (which would have been distracting) but I could hear the soundtrack. Danny Elfman did part of it – like most everything he does, this is perfect for “mysterious and spooky.” It made a bad day a lot better.

There are a few cover songs. This Wednesday plays the cello (Jenna Ortega learned to play for the show). There’s a great version of the Rolling Stones’ “Paint It Black” and an even better version of Metallica’s “Nothing Else Matters.”

And then there’s the Nevermore “prom” which has Wednesday dancing to The Cramps’ “Goo Goo Muck.” Jenna Ortega choreographed it herself, drawing from “videos of goth kids dancing in clubs in the ’80s and Siouxsie and the Banshees performances.”

Was the blood-in-the-fire-sprinklers scene necessary? Not really. Was it cool, especially Wednesday’s reaction to it? Absolutely.

Wednesday isn’t The Addams Family. Jenna Ortega’s Wednesday is 16, not 11 or 6. This show is darker and more serious than the 60s TV show or the 90s movies. If you expect “all together ooky” you’re going to be disappointed.

But if you like dark fantasy about someone who has her act together in ways I could only dream about when I was 16, give it a try.

November 27, 2022
Do the Gods Care About Everyone?
Next Post 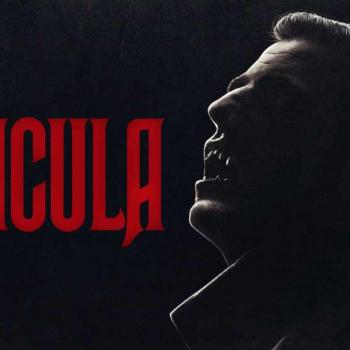