The Cross That Batman Bears 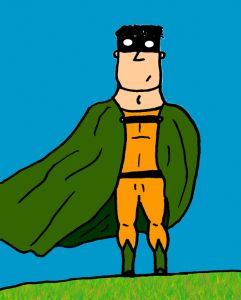 We tend to think of integrity as a quality that feels really good to possess and manifest. We think of, say, Batman — hands on hips, chest out, cape flowing magnificently behind him — standing triumphantly over one of his conquered enemies, and we imagine he’s just glowing from the inside, from having just accomplished something wonderful. And he has done something wonderful. And of course he knows that he has. But the feeling that Batman gets at the moment he’s finished doing something wonderful isn’t one of integrity. What he feels is pride. And pride is to real integrity what sugar glaze is to a donut: it makes it more immediately gratifying, but is bad for you.

Of course Batman, being … well, Batman, does have true integrity. So what he does, after pausing for just a moment to process the legitimate inner pleasure that he gets from having, say, harpooned the Penguin — is get right back to work again. He hoists the squirming Penguin up off the ground, handcuffs him, and delivers him to the police station. Then climbs back into his Batmobile, hauls it to his Batcave, and gets busy right away solving another crime (or figuring out Alfred’s work schedule for the week, or making sure Robin’s keeping up with his baking lessons, or whatever it is Batman does to keep his awesome world running smoothly).

Point is, he gets right back to work.

And that’s what we expect Batman to do. Because we know his character. We know he’s not looking for accolades, or fame, or lavish shows of praise from public officials. We know Batman is a better bat man than that.

Now, what we don’t know about Batman is whether or not he believes in God. We can hope that he does. Because a man who believes in God (atheists: this is where you’ll feel your hackles raising) is less likely than one who does not to look beyond himself for his self-affirmation. And it’s guaranteed that, sooner or later, affirming himself simply won’t be good enough for Batman. If all he has to count on is himself to tell himself that he’s great and worthy, then there’s no way out of his eventually wanting more than that. He’ll eventually want someone else to validate for him that he’s a good man doing good things.

If he’s doesn’t believe in God (or a very clear Higher Power of one sort or another), then before long Batman is going to want to see his name in the papers. He’ll crave a little of that warming, bright spotlight. He’ll yearn for Commissioner Gordon to present him with the keys to the city before an applauding, adoring throng of Gothamites.

And from the moment he smiles and waves for the camera, it’ll be all downhill for our beloved Caped Crusader.

Pretty soon he’ll be scheduling his own press conferences. Then he’ll start staging battles with evil-doers in such a way as to put him in the best possible light; he’ll be arranging showdowns with his former arch-enemies.

Then he’ll start to drink a little — just at night, to help him sleep.

Before too long he’ll just be some gaseous, bragging windbag who’s forced Batgirl to change her cell phone number.

Why the inevitable down slide? Because a person of real integrity only cares about one kind of affirmation, and that’s the kind he gets internally — from, if you’re a Christian, the Holy Spirit. And, frankly, getting that kind of affirmation doesn’t exactly amount to a party being thrown in your  honor twice a week. The affirmation one receives from God is about as subtle as subtle gets. It’s certainly no less real for being subtle — in fact, it’s more real for being so subtle — but it generates from a station to which one must be exquisitely attuned in order to hear from it enough music to keep one happily dancing.

A man of genuine integrity must live his life like a former fat person on a very strict diet. He can let himself have a little fat and sugar, but mostly he has to understand that his desire for fat and sugar is a false, harmful kind of desire; that it’s bad, and works against his higher interests.

He has to pretty much forget about being gratified by fat and sugar. And when he does indulge a little, he knows that he must pretty instantly forget that taste and the pleasure it brought him, and keep on moving; he knows he has to get right back to work. He knows how easily transitory gratification can hook a man, how quickly it can wrap him in its nasty, downward pulling tentacles.

A man of integrity registers a pat on his back, for sure, and certainly appreciates it. But it’s off his mind as quickly as that hand is off his back, because he knows that if he becomes attached to the idea that he’s somebody worth complimenting and appreciating, that he’s someone who deserves the respect and admiration of others, then before too long, by virtue of a huge part of his very nature (Christians would say the fallen part of his nature), he’ll begin craving more and more of that sort of exterior, human kind of affirmation.

There’s a reason we tend to associate our True Heroes with the image of them (in one way or another) riding off into the sunset. They do that — they isolate, they move on — because they don’t care what other people think of them. They’ve learned to tune out that sort of input.

They’re tuned, instead, to something deeper than that.

They’re listening to WGOD. And if that’s not what a hero is listening to as he rides off into the sunset, then it’s only a matter of time before he turns his horse around and comes riding back into town, where he’ll seek out anyone who wants to join him for a little drinkin’ and whorin’. Because he’ll want that attention and stimulation.

Anyone over the age of seven (at the outside) knows the difference between right and wrong, between honorable and dishonorable, between worthy and worthless. We know it. We’ve lived it. We’ve learned it. That knowledge is now part of our DNA.

All we have to do now in order to become the person God has been trying to make of us our whole lives is to finally and thoroughly accept the fact that we were born to be persons of integrity. That that’s why we were created in the first place. That the only one getting in the way of our being that person is us.

It’s the Zen of wisdom: once you want or think you have it, you’ve lost it.

If this angered you, you might further enjoy I, a Christian, Admit It: Atheists Have Been Right All Along

June 17, 2010 When Bad Emotions Happen to Good Christians
Recent Comments
35 Comments | Leave a Comment
Browse Our Archives
get the latest from
John Shore
Sign up for our newsletter
POPULAR AT PATHEOS Progressive Christian
1