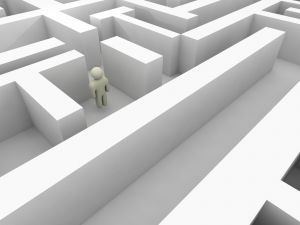 Here’s an expansion upon my Tweet o’ this morning that read: “Watch that you don’t sacrifice being a Christian for doing Christianity.”

Sometimes I think that in our efforts to be all that we can be when it comes to Christ, we make Him entirely too complicated.

As a means of proving that he loves and cares for us, God became a man, absorbed into himself the full cost of every wrong we and any other human would ever do, and then let that eternal debt—all that negative karma—be obliterated along with the corporeal form he’d assumed. And then—just in case we ever forget or lose touch with that reality—he left in our hearts the Holy Spirit, which is God in his entirety, as near to us as our next thought or breath.

That’s it. That’s what happened. That’s the entire story of who Christ is, and what he did.

We don’t have to do anything about what God did on earth. We don’t have to (and can’t) improve, embellish, elaborate, add to, enhance, or in any way modify it. And we sure don’t have to make ourselves worthy of it. We can’t. That’s the whole point.

We make God too complicated. One of the main reasons we do that is because the Bible is so extremely complicated that, in order to even begin to grasp its meanings and implications, most of us rely upon someone who went to seminary college for four years just so they could begin to understand and teach the Bible.

God himself, though, is the ultimate in uncomplicated—and, via the Holy Spirit, is or can be as fresh and new to you as the very moment in time in which you’re reading this.

Don’t ever sacrifice the peaceful simplicity of being Christian for the complicated busyness of doing Christianity. Never forget that God cares so much for the former he gave his bodily life for it, and that for the latter he wouldn’t give a plugged dinar.

That might not be the Holy Spirit telling you to go join my Facebook fan page, but do you really want to risk it?

September 15, 2010 Why I'm Hopeful For Our Future
Recent Comments
36 Comments | Leave a Comment
Browse Our Archives
get the latest from
John Shore
Sign up for our newsletter
POPULAR AT PATHEOS Progressive Christian
1