Wings on a Pig 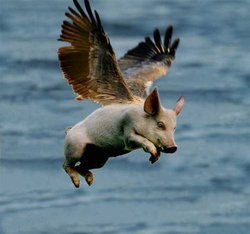 Once upon a time the evangelical Christian’s typical response to homosexuality was that gay people are just messed up straight people who need to become better Christians so that God can stop them from being gay.

The complete failure of the “pray away the gay” movement, however, in conjunction with endless evidence that people are simply born gay, has succeeded in finally tossing that hoary argument onto the ash heap of history. But has that stopped evangelicals from arguing against homosexuality? Of course not. They just needed a new argument, is all.

And they found one. Today the Christian argument against gay people is typically … well, this, taken from an email recently sent me:

Now the argument is that a gay person struggling against the temptation to be who they really are is no different from anyone else struggling to resist a “sinful” temptation. Now, in other words, the refrain isn’t that gay people should stop being gay. Now it’s that they should stop acting gay.

Evangelicals are positively enamored of this new argument. If I’ve heard it once, I’ve heard it ten thousand times. We all have. You whisper “gay” into the ear of a sleeping evangelical, and there’s an excellent chance that he or she will start murmuring in their sleep, “Just like any other sinful temptation. We’re all sinners. Must resist temptation.”

And putting your brain to sleep before you say that is the very best way to say it, too. Because it’s an argument that could only make sense to a brain-dead person. It’s just too lame for words.

But lemme try to find some words anyway.

Virtually all sins share a crucial, defining, common quality. Because that quality, which is present in every other imaginable sin, is utterly absent from being or acting gay, insisting upon putting homosexuality into the same category as every other sin—or in the category of sin at all—is like gluing wings on a pig, and insisting that the result belongs in the category of “bird.” It doesn’t. It can’t. It won’t. Ever.

Here is that Big Difference between homosexuality and all those other activities generally understood to be “sinful”: There is no sin I can commit that, by virtue of my having committed it, renders me incapable of loving or being loved. I can commit murder. I can steal. I can rob. I can rape. I can drink myself to death. I can do any terrible thing at all, and no one would ever claim that intrinsic to the condition that gave rise to my doing that terrible thing is that I am, by nature, unqualified for giving or receiving love.

No one tells the chronic drinker, glutton, adulterer, gambler, or any other kind of sinner that having committed their sin—that being the way they are—means they must stop experiencing love.

Yet living without love is exactly what anti-gay Christians insist upon for gay people.

When you tell a gay person to “resist” being gay, what you are really telling them—what you really mean—is for them to be celibate. It’s okay for them to be gay; they just can’t live out their gayness.

What you mean is that you want them to condemn themselves to a life absolutely devoid of the kind of the romantic, long-term, emotionally and physically intimate love that all people, Christians included, understand not only as their birthright, but as just about the greatest part of being human.

Be alone, you’re demanding. Live alone. Don’t hold anyone’s hand. Don’t snuggle on your couch with anyone. Don’t cuddle up with anyone at night before you fall asleep. Don’t have anyone at your table to chat with over coffee in the morning.

Don’t have or raise children.

Don’t get married. Live your whole life without knowing that joy, that sharing, that fulfillment.

The “sinful temptation” that Christians are forever urging LGBT people to resist is love. [Tweet that.]

Now isn’t that funny, given that love is the one thing that Jesus was most clear about wanting his followers to extend to others? It’s just so funny it makes you want to laugh till you cry.