Listen to God; Screw the Rest 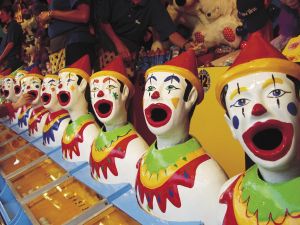 Okay I’m going to rave again, because I’m exhausted (I just finished, in nine days, a 43,000 word book) and because … well, see, I can’t even remember the other reason. That’s how fried I am.

Oh, right: And because I’m in a hurry. Doi. People to go, places to do.

Anyone alive right now who is a Christian is ipso facto in the middle of a historically massive transformation, relative to the way their faith is perceived and done in and by the outside world.

You know why? Media.

Media is our life-sucking game changer, and no two ways about it.

Media has so deeply woven itself into our culture, and (thereby) into our collective consciousness, that anyone today seeking to hear the voice of God is bound to hear coming in with that precious and much-anticipated voice so much raw, sparkling crap that, if I were God, I would be worried that if I did want to orchestrate my Big Second Coming, no one would give a rat’s ass about it or me unless I made sure to do it via a star-making turn in a really popular reality TV show.

Of course, being God, I could arrange for that show to happen.

Plus, he’d need a really cool app people would buy.

God, I think I just threw up a little in my mouth.

Anyway, here’s my point: If you’re a Christian, hang on. Hang on to what you know. Hang on to what God is forever and very clearly whispering to you beneath the noise, behind the show, before the razzle-dazzle starts its jangly jingle. What God is telling you—and only you, about you—cannot be packaged, cannot be marketed, isn’t subject to a media campaign, won’t show up from Amazon, isn’t available for a limited time only.

Your game will always remain all it has ever been. It will always be between you and God—period.

You and God are co-stars in the only reality show that you (or, surprise, He) will ever really care about. And the script for that show is always written in silence.

Tune into that blessed collaboration, and forget the rest.

Screw the noise; and screw every source it comes from.

November 17, 2010 When Should Christians Start Pointing Fingers?
Recent Comments
38 Comments | Leave a Comment
"You know less 👏🏻"
Shemara Lakin When biblical “laws” no longer apply
"This clown relies on fooling others who know less then she does."
Hollybell MN When biblical “laws” no longer apply
"Right away you state atheists refuse to listen. I'll bet you don't listen either. Did ..."
JamieHaman Why atheists win arguments with Christians ..."
"Oh wow, so you did get in? Did you do all 9 months and graduate, ..."
Peter J. Markavage The Bible and sex addiction
Browse Our Archives
get the latest from
John Shore
Sign up for our newsletter
POPULAR AT PATHEOS Progressive Christian
1