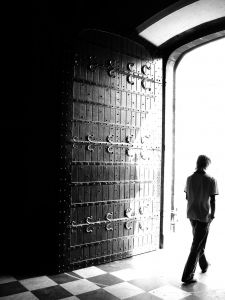 In response to the tsunami of outrage occasioned by Sojourners’ refusal of Believe Out Loud’s Welcome video, Jim Wallis yesterday issued this statement.

In his statement of defense, Mr. Wallis makes six numbered points. Following the order of his presentation of them, those six points boil down to:

For the record, I take no pleasure in banging on Mr. Wallis. By all accounts he has accomplished a great deal of good in the world. He has fought to free South Africa, to reduce nuclear arms, to stop the wars in Iraq and Afghanistan, to bring about global economic health, to pass immigration reform laws, and to bring an end to human trafficking. Winner of the 1995 Pacem in Terris Peace and Freedom Award, Mr. Wallis is spiritual adviser to President Obama.

This is hardly a man I’m inclined to criticize.

But, alas, this is also a man whom I believe to be dead wrong on the gay issue. And—what with the open letter to him I yesterday published and all—that is what I’m now constrained to address.

So let’s begin with the first and primary point of Mr. Wallis’ defense: It’s bad to bully gays; and good to defend the lives, dignity and civil rights of gay people.

The profoundly intractable problem with Mr. Wallis making that assertion is that if you look elsewhere on the Sojourners site, you find this page, whereon Mr. Wallis answers the question, “What is your position on gay marriage and same-sex relationships in general?” There Mr. Wallis starts right off making the point that he so noticeably avoided in the six points of his post yesterday:

“We can make sure that long-term gay and lesbian partnerships are afforded legitimate legal protections in a pluralistic society without changing our long-standing and deeply rooted concept of marriage as being between a man and a woman.”

And there’s the giant undercooked waffle that so many Christians cannot seem to sweep off their table or return to the kitchen: Gays should have all the rights the rest of us enjoy; but make no mistake: since their romantic love is inferior, they are inferior.

And no matter how much syrup is poured upon it, that particular waffle remains unpalatable.

Mr. Wallis, I implore you to consider that saying that it is your long standing, deeply rooted conviction that marriage should only be between a man and a woman is tantamount to saying that gays and lesbians are (pick your word/phrase) unnatural, inferior, morally corrupt, shameful, disgraceful, freakish, an abomination before God. That is necessarily the correlative truth to “the only legitimate, God-pleasing marriage is between a man and a woman.” That’s what those words of yours mean, friend.

So. You know. Stop doing that.

At any rate, if you’re going to claim that gays and lesbians are an affront to God (which is what you claim: put down that fork!), then it is simply not feasible for you to at the same time claim to be against the bullying of gays. That’s like building a huge public swimming pool facility, throwing open its doors on its Grand Opening, and then publicly taking a bold stance against people swimming. It just doesn’t make sense. Swimming in them is what people do with pools. Just like bullying is what people do to others whom they’ve been taught are so inferior that God has made a big point of condemning them to hell forever. One inevitably follows the next. It’s just human nature.

Also, please understand that it’s not the actual, physical bullying that most hurts gay and lesbians. What most hurts them—what destroys their optimism, crushes their hope, obliterates their self-esteem, and finally compels so many of them take their own lives—is the message in which that bullying is grounded.

“You deserve our scorn—and have God’s scorn—for the despicable thing you are,” is about the most annihilating thing a young person can hear about themselves from their peers.

If you’re sincere about wanting to help stop the bullying of young gay people, Mr. Wallis, then please stop sending their bullies the message that while God might disagree with their tactics, he not only applauds, but is actually the source of, their motivation.

As to the second part of Mr. Wallis’ first point—the part about defending the lives, dignity, and civil rights of gay and lesbian people. It is good to hear that Mr. Wallis supports the legalization of gay marriage. (I assume that’s what he means, anyway, since no less an authority than the U.S. Supreme Court, in its unanimous decision to decriminalize interracial unions forty years ago, called marriage “one of the basic civil rights.” Moreover, if gay marriage was legalized, gays would have each of the legal rights that in his answer to the gay question Mr. Wallis stipulates desiring they do. Saying you support civil rights for gays is saying that you support the legalization of gay marriage.)

The problem with Mr. Wallis championing the rights of gays to legal civil marriage is that it proactively leaves out in the cold the great many gays and lesbians who, just like most other people, want to be married in church, by a pastor, before God. So we again find ourselves back to this grossly untenable “separate but equal” status for gays and lesbians. In reality there’s no such thing as “separate but equal”: equals don’t need to be separated. “Separate but equal” invariably means that one of the two parties is less “equal” than the other. By proclaiming his support for civil unions for gays, Mr. Wallis is with one hand holding open the doors to City Hall—and with the other keeping closed the doors of the church. That’s too far a stretch. Affirming their legal rights, while at the same time negating their spiritual needs (and thereby their inherent moral integrity), isn’t “defending the dignity of gay and lesbian people.” It isn’t defending the dignity of anyone. It’s like telling someone that they’re welcome to eat anywhere they like—as long as it’s in the kitchen.

As to the other five points of Mr. Wallis’ rebuttal:

2. Christians should be welcoming and loving to gay people. If you don’t respect somebody–and Christians who believe that homosexuality is a sin cannot truly respect any gay or lesbian person—then you can’t love them. Love without respect isn’t love at all. It’s patronizing, at best.

4. Sojourners is less directly concerned with the gay issue than about “poverty, racial justice, stewardship of the creation, and the defense of life and peace.” That last point is mighty fuzzy, but … okay. I get it. Good job. Poverty, racial injustice, and a destroyed earth are bad. I personally think that what a Christian leader should be concerned with above all is making sure that nobody—much less an entire class of people—is systemically denied the love of Christ by the very church that Christ established. But I’m also definitely in favor of clean rivers.

6. Sojourners wants to discuss difficult issues in its editorial pages, not via its ads. Makes sense.

And there we have it. I’ll let you know if Mr. Wallis contacts me! Which I’m sure will happen within the next two or three nevers!

If you’re interested, other pieces I’ve written on this issue generally includes:

The Gay Teen Suicide Rate and the Christian Condemnation of Gays

An Interview with Charles Robbins, CEO of The Trevor Project

The Real Reason Christians (and Others) Get So Crazy About Gays

What Would Jesus Do If Invited to a Gay Wedding?

How Is Being Gay Like Gluing Wings on a Pig?

And if you’re looking for a version of Christianity that’s sane, check out Unfundamentalist Christians.

May 9, 2011
An Open Letter to Famous Progressive Christian Jim Wallis
Next Post

May 13, 2011 How I Single-Handedly Made All Christians Want to Dance on a Gay Pride Float
Recent Comments
83 Comments | Leave a Comment
Browse Our Archives
get the latest from
John Shore
Sign up for our newsletter
POPULAR AT PATHEOS Progressive Christian
1

Hitler, Trump, and the Golden Calf
Freelance Christianity
Books by This Author Books by John Shore