Christians and the Blood of Jamey Rodemeyer

Christians and the Blood of Jamey Rodemeyer September 20, 2011 John Shore 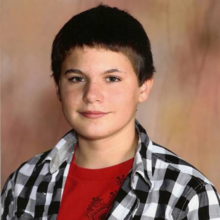 Jamey Rodemeyer, above, is a 14-year-old kid from Buffalo, NY, who earlier this week, after years of being bullied for being gay, committed suicide.

If you’re a Christian who believes that being gay is a morally reprehensible offense against God, then you share a mindset, worldview, and moral structure with the kids who hounded Jamey Rodemeyer, literally, to death. It is your ethos, your convictions, and your theology that informed, supported, and encouraged their cruelty.

We Christians who believe that God created gay people as much in His own image as he did straight people are begging you to reconsider your theology — to do nothing more than be open to an alternative, fully credible, scholastically sound interpretation of one or two lines from Paul.

How can you be unwilling to do something so simple, when you see the horrible ultimate cost of that refusal?

Christ died so that you could love more. And you now support and willingly participate in a system that allows that same Christ to be used as a moral justification for the most vile kind of abuse. How could that have happened? How could something so right have gone so wrong?

Turn, friend. And when you do, open your arms. Discover waiting to embrace you a new Christ behind the relative shell of the one you inherited. Jesus Christ died for your sins. That was unthinkably beautiful. Now Jamey Rodemeyer has died from your sins. That is not. That is the very hell that, awfully enough, you’ve somehow tricked yourself into believing your life refutes.

Please watch this till its end:

September 19, 2011
The Inevitability of the Rise of Progressive Christianity
Next Post

September 23, 2011 Christians and Gay Teen Suicides: "How could anyone be so stupid?"
Recent Comments
637 Comments | Leave a Comment
"Y'all are nuts and I'm a Christian! Call evil out and yall are evil. Monte ..."
Lesa Jackson How I Blog (and Why I’m ..."
"abusers are master manipulators."
Brandon Roberts That lovable man who abuses you
"Triggered? No. Confused?... Yes. At the amount of assumptions you seem to be making stemming ..."
Isaac A Christianity to make Satan proud
"Can I elaborate? Absolutely. I could write books and books on the subject. However, I ..."
Liora Hess A Christianity to make Satan proud
Browse Our Archives
get the latest from
John Shore
Sign up for our newsletter
POPULAR AT PATHEOS Progressive Christian
1