I got married to God by a Bad News Bear

So by way of a ceremony that began around 3 p.m. on Saturday in my best friend Pastor Bob’s Church, in which Rev. David Stambaugh, associate pastor of the United Methodist Church of Hollywood served as officiant, I was ordained in accordance with the constitution and canons of the Progressive Christian Alliance as a Pastor in Christ’s Church.

The whole experience was one of those extremely rare affairs that are so obviously magical and ridiculously perfect that all you can do is sort of drift through it in that weird, practically zombie-making haze that comes over you whenever God completely takes over whatever’s going on.

Pastor Bob’s church is amazingly beautiful. And its whole altar area was decorated in the red used for ordination services, because the following day they were doing a confirmation service, which also calls for the red that symbolizes the fire which appeared over the heads of the apostles at the coming of the Holy Spirit on Pentecost.

So that was a big coincidence.

So was the out-of-nowhere appearance of Sheldon, the church’s world-class pianist.

“Hi, guys,” said Sheldon, popping his head inside the sanctuary. On a Saturday afternoon. “Whatcha’ doin?”

“Having an ordination ceremony for my friend John here,” said Bob cheerily.

“Want some music?” asked Sheldon. “Some Beethoven maybe? Or some Bach?”

So while Bob and his beautiful wife Laura, who is the lead pastor of their church (Bob’s the associate pastor), busily set up the altar area—lighting the big candles, turning on the fountain bapistry at the front, getting all the lights just right—Sheldon prepared himself at the piano.

Then David Stambaugh arrived along with his beautiful wife Becky and a friend of theirs who seemed like the nicest guy in the world.

And it turns out that David is superb at this stuff. He was just so . . . perfectly warm and loving and kind and smart and funny and good-natured—and seriously prepared. Guy came to do business, man. He’d made sure to become familiar with my work. He had a little black binder thing from which he read the ordination questions he asked me. He was just . . .  all there. He’s a man of God who had come to do God’s work.

And he did! At some point he, me, my wife Catherine, Bob and Laura gathered in a half-circle around the softly burbling fountain. In the pews were his wife Becky and their friend, Bob and Laura’s beautiful teenage daughter Emily, Emily’s godmother (a wonderful friend of Bob and Laura’s whose name escapes me, which is awful because she’s a wonderful person with whom my wife and I had the greatest chat), and Pastor Laura’s mother, visiting from out of town.

When we were all ready Sheldon concluded his gorgeous playing and quietly took his seat in a front pew.

After a long pause David spoke. He said beautiful things about why we were there. Then he asked Bob to say a blessing for the occasion, and we bowed our heads in prayer as Bob said unbelievably beautiful things about my ministry, and the extremely important role Cat plays in it: he called my work the ministry of both Cat and I, which I really appreciated. Then Laura prayed a prayer for me and us and my work, which was so beautiful and powerful that, with my head down, it was all I could do not to join Cat in crying.

Then David asked me the ordination questions, which were about ten thousand times stronger than anything I had expected. It was  . . .  fully liturgical: the same sonorous, ancient-language, full-on vow stuff you hear when . . .  well, when people receive their ordination. So I listened, hard, to everything he was asking, and then said “I do,” and “I will” when it was time to.

It was just like getting married. It was that serious.

Boy. It was something. It was kind of exactly like the time I’d stood before my church’s congregation and answered the questions put to me by my pastor during the ceremony of my adult baptism. (Which, I realized last night, had happened sixteen years before on exactly the same date—October 20th—as my ordination.)

Then everyone laid hands on me, and as he gently squeezed my shoulder David said as beautiful a prayer as anyone ever has.

So. That’s how it happened. Below are pictures. (From top to bottom: Cat and me; David Stambaugh and me; le’ ordination; David; me and Pastor Bob; child actor David.)

I really want to thank everyone who left a kind word on last time’s post. I certainly did read and deeply appreciate each and every one of them. And you better believe I held them in my heart during the whole affair. Again, thank you for that so very much. 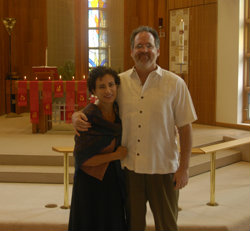 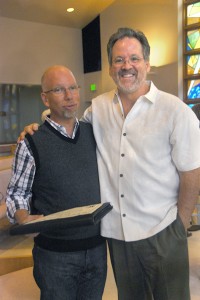 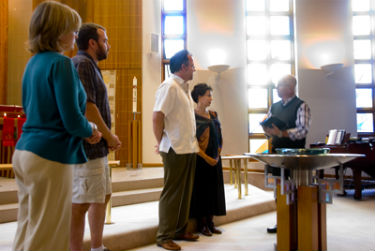 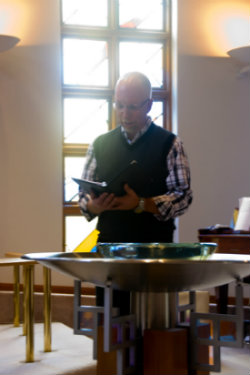 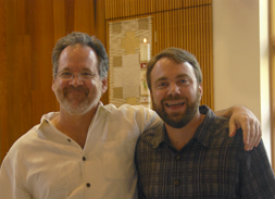 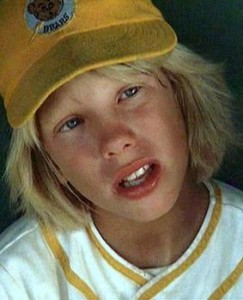 But David’ll always be a Good News Bear to me.

October 19, 2012
Pray for me as I get ordained as a pastor of The Progressive Christian Alliance
Next Post

October 23, 2012 Do "good" Christians help you avoid temptation?
Recent Comments
43 Comments | Leave a Comment
Browse Our Archives
get the latest from
John Shore
Sign up for our newsletter
POPULAR AT PATHEOS Progressive Christian
1

Congratulations, President Trump: You Got Your...
Freelance Christianity
Books by This Author Books by John Shore