Proof that believing in hell is not Scriptural 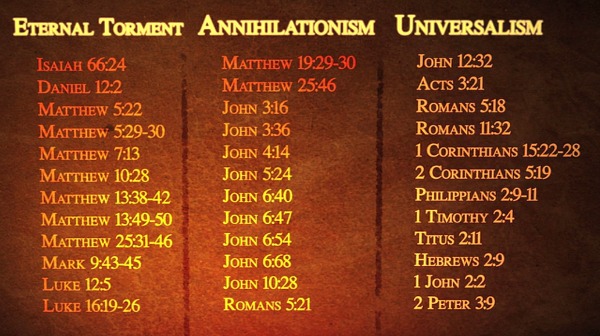 Evangelicals who believe in a literal hell are very keen to argue that rejecting hell means rejecting Scripture. But no amount of posturing or Bible thumping can turn that extremely mistaken notion into the truth. Why? Because there is  solid scriptural support for the three radically differing traditional Christian models of hell known as Eternal Torment, Annihilationism, and Universalism.

Throughout sundry stretches of history, each of these theories of hell has enjoyed prominence over the other two.

In our current era it is, of course, the theory of Eternal Damnation which reigns supreme.

Now, isn’t it interesting that the theory of Eternal Damnation is the only theory among the three that lends itself to making money? And what about that theory lends itself so readily to wallet squeezing?

It’s the only one that engenders profound fear of the afterlife.

If you want people to pay good money to support your institution, you can’t beat making foundational to that institution the belief that not supporting it condemns one to eternal torture.

To quote … well, me: Show me a Christian terrified of hell, and I’ll show you a Christian ready to pay good money for the assurance that he isn’t going there.

If you are a Christian who harbors the idea that a literal hell is grossly incompatible with an all-loving and all-powerful God, please rest assured that rejecting the notion of hell is not only morally and rationally right, it is supported by Scripture. You can also be assured that the day is quickly dawning when more Christians than not will feel the same way.

* This post is based upon my review of Kevin Miller’s excellent documentary about hell, Hellbound? (from which I also saved the image atop this post), which is now available for streaming on Netflix. 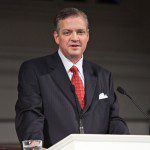 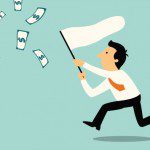