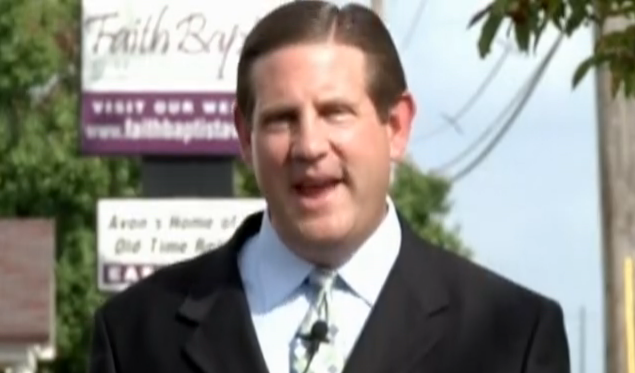 (A version of this post was originally published here in March of 2013. I’m revisiting it now because I’m hearing from so many people wanting to better understand the mindset of Independent Fundamental Baptists [IFB]—the denomination to which the Duggars belong. This might help a little with that.)

Above is “Dr.” Marc Monte, lead pastor of Indiana’s Faith Baptist Avon, an (IFB) church. (The quote marks around “Dr.” are because Monte is a doctor like I’m an astrophysicist. He has nothing but one of those “honorific” faux-doctorate degrees that IFB leaders hand out to each other like little boys playing Now you knight me!—except, of course, these pretentious potentates then use their fraudulent titles to bolster the authority they wield over their churches with such impunity. Interesting, isn’t it, how leaders so passionate about remaining “separate from the world” at the same time so avidly co-opt the signifiers of power from that world—such as the title Doctor?)

On their blog the Duggars have said that, for their homeschooling needs, they use curricula published by Bob Jones University, which is hardly surprising:

Bob Jones University is where the young woman whose story I shared in A Christianity to Make Satan Proud learned just how organically evil the IFB is.

Toward the end of last month [being Feb 2013], the good people at BJU News sent out a few tweets about the investigation of BJU for endemic sexual abuse currently being spearheaded by G.R.A.C.E., which stands for Godly Response to Abuse in the Christian Environment. (That name sets my teeth on edge, since it suggests a difference between a “Godly” response and the right response to abuse.) By way of replying, “Dr.” Monte tweeted this:

And, finally, women should never forget God’s intention for them (and their hair):

So, to recap these fundamental beliefs held by “Dr.” Monte: No sane person is ever abused, victims of abuse should tell their story to no one but the police, and God wants women to wear the proper hairstyle and be submissive.

And that, right there, is as Independent Fundamental Baptists as you can get.

Subsequent to his Tweets above, an apparently inspired “Dr.” Monte also Tweeted:

And here’s a Tweet “Dr.” Monte sent out one month before the Duggar abuse story broke:

Again: this is perfectly IFB.

This is from me: Six Things to Know About Sexual Abuse and Forgiveness.

June 2, 2015 Why You're Completely Able To Judge Caitlyn Jenner
Recent Comments
94 Comments | Leave a Comment
"So... you don't believe in the Holy Spirit, then? According to Jesus, it is the ..."
KraigDeKompressorKruncha Is hell real? What are we, ..."
"Thank you thank you thank you for this! This is exactly my story... Our story. ..."
ashley williams 1 Man, 2 Women In A ..."
"Hello dear Brother in Christ. You are experiencing Child Abuse and if it were possible, ..."
Marion Duncan Pastor calls his Christian teenage son ..."
"I am interested in why we believe that we can measure that which is by ..."
Gary Kennedy Why atheists win arguments with Christians ..."
Browse Our Archives
Related posts from John Shore