This post is part of the Patheos Book Club for Chuck Gutenson’s new book The Right Church: Live Like the First Christians (Abingdon Press). You can visit the book club site for more info on the book, an interview with Chuck, and a chance to join the conversation.

1700 years ago this fall, the Roman Emperor Constantine was victorious in his battle at the Milvian Bridge. He came away from the victory giving honor to the God whom his mother had worshiped but whom his predecessors had either persecuted or simply ignored. The year 312 CE thus became a turning point in the history of the Christian movement. Over the course of the next several decades, Christianity swiftly transitioned from being a persecuted minority movement to become an imperial religion. You couldn’t join the Roman army by the end of the 300’s if you weren’t a Christian.

For sixteen centuries Christendom has stood as the unquestioned religious reality of Western civilization. This is not to say that Christendom has not had its detractors, nor that there hasn’t been a diversity of both faith and practice within it’s borders. From the very beginning, the desert ascetics had their doubts about the marriage of Christian faith and imperial power. The monastics carved out corners of resistance, along with the Waldensians and the Brethren of the Common Life, the Anabaptists and the early Pentecostals. There’s no sense pretending that Christendom was a monolith. It wasn’t. But it has been, as they say in energy-speak, the “spine” of our religious grid in the West.

But not anymore. This is the data that’s been coming in from religion polsters for the past decade. It was the religion news story of this summer, articulating most clearly and thoughtfully, I think, in Diana Butler Bass’s new book Christianity After Religion. (Check out her blog for some summary reports.) Though many have been saying it for years, the date is in. Christendom is done. It was a good long run, folks, but it’s over.

So, what now? The single biggest question facing the church in our moment is how we are going to reconfigure and understand who we are in this new era. Of course, there are lots of opinions. And when there is diversity–especially diversity under stress–there will be arguments. These are days when we should pray for patience… and imagination. 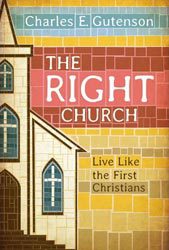 But we should also be thankful for gifts to help us find our way. And Chuck Gutenson’s new book, The Right Church, is just that kind of gift. Direct, accessible, and even fun to read, Chuck’s book is one-half intro to church history (if it were taught by the most popular professor on campus) and one-half invitation to imagine a way of life with Jesus in the world today.

Without overwhelming the lay reader, The Right Church really does immerse the reader in the stories that gave life to the early church. It quotes the church fathers at length–our foreparents who walked with Jesus before Christendom–and invites us not to dream nostalgically about what might have been, but to imagine how the same movement that captured their imaginations can claim our lives today.

So Origen becomes a model for developing a Scriptural imagination, Clement of Rome our guide for thinking about how to care for creation. In a chapter on discipleship, Chuck introduces the ancient practice of catechesis, one that I’ve spent considerable time chewing on as we put together The Awakening of Hope over the past few years. “What we desperately need in the church is a means for providing training in both the beliefs and practices that constitute the life of faith,” Chuck writes. Thankfully, we have ancient models to help us imagine how to do this well in our time.

Peter Maurin, co-founder of the Catholic Worker movement, used to say that he believed in a vision for the world that was “so old it looked like new.” By inviting us into the living tradition of the church’s first few centuries, Chuck invites us to do something similar: to tap into a movement so old that it looks like new. And to follow the Spirit in living it where we are.