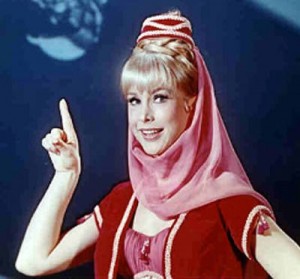 Now 16, the New York Times reports that Jessica identifies herself as an atheist, and it was her convictions as a self-proclaimed atheist that compelled her to get a prayer removed from her high school auditorium.

That the prayer had been presented as a gift to Rhode Island’s Cranston High by the Class of 1963 mattered not to Jessica. She was never asked to recite it, never forced even to read it. It just hung there by the stage, like graffiti art of sorts, prayers being one of our oldest forms of poetry.

An unidentified parent, who apparently lacks the backbone Jessica possesses, made the first official complaint to the ACLU, but it was Jessica who picked up the torch to have the prayer removed, saying it was an affront to her atheist beliefs. Yes. Atheism is its own form of religious practice.

Madeleine L’Engle, in fact, asserted that Christians ought to practice atheism more. “We must become atheists for Christ’s sake,” she said. “We must be certain that it is God we believe in, and not all those false spirits masquerading as the Holy One.”

L’Engle would undoubtedly applaud Jessica for her boldness in rejecting a false God. Jessica said she became an atheist at age 10 after her mother fell ill. “I had always been told that if you pray, God will always be there when you need him,” Jessica said. “And it didn’t happen for me, and I doubted it had happened for anybody else. So yeah, I think that was just like the last step, and after that I just really didn’t believe any of it.”

Jessica stopped believing in the Magician God, the bobble-headed idol marketed and sold by Wall Street and prosperity preachers the world over. Jessica rubbed the Magic Genie God and didn’t get what she wanted, when she wanted, the way she wanted, so it was then, at age 10, she called out, as spoiled children often do, Phooey-on-You. And now at age 16, she is being encouraged to continue her tirade, this time under the guise of looking out for all our Constitutional Rights.

Jessica was wrongly vilified in her own community after a local chapter of the ACLU asked Jessica to be a plantiff in their lawsuit against the school. Jessica doesn’t yet understand the irony of this. She quit believing in God when he failed to be the puppet to her puppeteer but then she willingly became the puppet of the ACLU.

A tarp now covers the prayer after a federal judge ruled its presence unconstitutional. All this because of some poem a seventh-grader wrote in 1963 that begins with the words “Our Heavenly Father”. 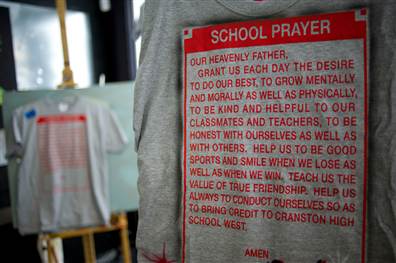