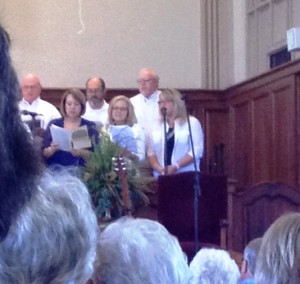 A year ago, when I was in my hometown, I stopped by the Starbucks on Manchester Expressway, not far from the junior high I attended. I was there working when I struck up a conversation with a young soldier.

You know how I am.

We talked about his growing up in Montana, about his being a Ranger, and about the military in general.

I had one battered copy of After the Flag had been Folded with me, and I offered it to him. Mostly, as I remember, because we spoke about PTSD and its affects on families. I took his name and his email and promised to stay in touch.

Every now and then I would think, I should email that fellow.

But then I would talk myself out of it.

I mean, he’s a busy Ranger and all.

This weekend I was at the same Starbucks and sort of chiding myself for my failures. I do that a lot. Chide myself about the things I should have done, or should be doing.

I know you are thinking I probably ran into him again in the Starbucks in Columbus.

Today I had set up several interviews with people to talk to them about the Church in America. We agreed to meet at a local coffee shop downtown not very far from the Ledger-Enquirer newspaper offices, where I once worked as a reporter.

I was at the coffee shop from 8 a.m. to noon. So many people came in that I haven’t seen in forever. Former Mayor Bob P., Sandra O., and Gary P. one of the local artists, and Chuck. W. my former editor at the paper. In between those visits, I conducted a couple of in-depth interviews.

I had promised to stop and see a friend on my way out of town so I shut down the computer at noon and  grabbed a iced latte for the road. As I was leaving the coffee shop, somebody called out, “Are you Karen?”

I wasn’t completely surprised given all the people I’d just run into that morning, and given that we had an wonderful article in the local paper about out reunion.

But I looked over, thinking I’d see somebody I recognized and I didn’t.

“Yes,” I said, to the young man who called out my name.

“We met a year ago at the Starbucks and you gave me a copy of your book,” he said.

“Oh, yes!” I said. “I was just thinking about you yesterday!”

He went on to tell me that he had read the book and had passed it along to others. He also said that as a result of the book he was now attending the Presbyterian Church in town with a Christian friend of his.

“I’m probably not going about this the right way but I’m checking out this faith thing. I’m studying it, referencing it.”

He said this in an apologetic manner.

“You are going about this the exact right way,” I said. “People need to thoughtfully consider what they are going to build their lives upon.”

We had a long discussion about theology, about God, about faith, and other things.

“You know I don’t believe in random encounters,” I said. “I call moments like these God’s poetry. I think God intended us to run into each other today.”

“I believe that too,” he said.

I had one remaining copy of one book with me — Will Jesus Buy Me a Doublewide?.

I signed it over to him.

I look forward to the next time I run into him.

Did I mention his name?

July 18, 2012 Mandela: Change an impending fate
Recent Comments
0 | Leave a Comment
Browse Our Archives
get the latest from
Evangelical
Sign up for our newsletter
POPULAR AT PATHEOS Evangelical
1