The Problem with Talk Radio 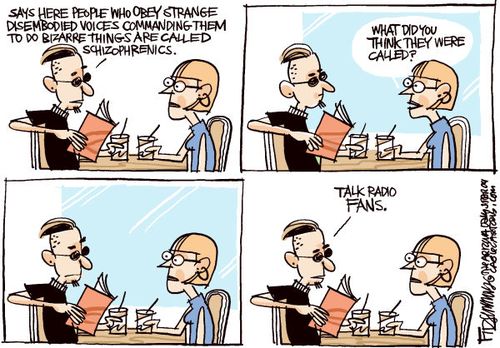 Not that I’m a genius or anything close to it but I have stumbled upon the source of all of America’s troubles and I am happy to report that is it not me.

And it is not you.

You want to know what’s really destroying this country?

You want to know what’s really breaking our backbone?

You want to know what’s gotten us beat down so low that we think the ant’s belly is the Goodyear Blimp?

Look no further than your radio dial.

I am serious as a heart attack.

Turn that dial to any one of the dozens of noonday radio talk shows and just listen in for half-an hour. (If you are like me, you’ll get the dry-heaves if you listen any longer than that.)

If listening to talk radio doesn’t make you reach for the bottle of anti-anxiety script, you might want to check your pulse. Perhaps you are already in a coma?

I’m not going to name any hosts names because this really isn’t a partisan thing. A talking head is a talking head and they err on all sides of the political spectrum.

The host of the show I heard on Tuesday’s drive baited his audience with this question: Are you better off now than you were four years ago?

The overwhelming majority of callers said that they were much worse off than they had ever been in their lifetimes. Fear was the primary emotion among the callers. Oddly enough the other thing they almost unanimously agreed upon was a trust and hope in the Lord Jesus Christ. Apparently that trust didn’t give them much hope, however, because nearly every caller spoke to the horrible conditions of this country and its citizens.

The host always asked them why they thought they were so much worse off. Here’s a few of their answers:

– We are worse off because of our debt and you know who is responsible for the debt crisis? NASA, that’s who. Get rid of NASA and we’d have enough money to pay off our national debt and feed all the people of the world.

– We are worse off because of the dumbing down of America’s schools. I mean when a kid gets grilled because his name is Hunter.

– We are worse off because we have an evil Muslim in the White House. It really scares me because he is allowing all these Muslims in the country under false pretenses. The U.S. is the largest Muslim country in the world. It won’t be long before they rise up and begin to fight us from within our own country.

– We are much worse off because we are no longer a Christian nation. We need to get back to our roots of trusting in the Lord Jesus Christ.

Well, that’s for dang sure.

Because I’ll tell you the whole time I listened to these callers, bless their troubled hearts, all I could think of was exactly what was it their faith offered them?

How in the world can anyone think being a person of faith is a good idea when people like this, bless their trouble hearts, carry on in such a negative, anxiety-ridden fashion?

If Jesus is really our Lord, does it really matter much who our president is? I mean when it comes to our own personal peace and hope and such?

And if any of you are so all-fired worried about the state of this nation, exactly what are you doing to make it a better place? Other than worrying yourself sick, that is, and then calling up complete strangers to bitch about how awful the world is now?

We cannot vote ourselves into being a better nation.

We cannot talk our way into being a better nation.

A nation is only as good as its people choose to be.

How have you been demonstrating faith over fear?

Karen Spears Zacharias is author of Where’s Your Jesus Now? Examining How Fear Erodes Our Faith and a bunch of other great books. You should read them & quit worrying so much.

September 7, 2012 Solidarity with the Grandchildren
Recent Comments
11 Comments | Leave a Comment
Browse Our Archives
get the latest from
Evangelical
Sign up for our newsletter
POPULAR AT PATHEOS Evangelical
1