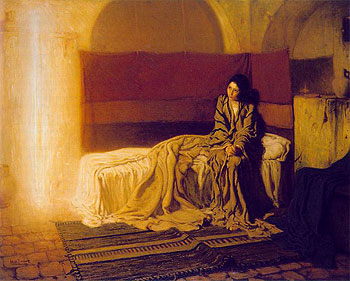 After my mother was diagnosed with stage four lung cancer in August, someone told Mama that God was trying to get her attention and that cancer was the two-by-four God used to do that.

I could never trust a God who carries a two-by-four for the sole purpose of whacking people who ignore him, could you?

She sits in a chair, hunched over a stack of leather bibles and devotional books by Spurgeon, Chambers, Graham and Moore searching for encouragement.

“I need to hear from God,” she says. “I need something to give me strength for today.”

I read to her from the devotional with the hand-tooled leather cover:“If we confess our sins, God is faithful and just to forgive us our sins and to cleanse us from all unrighteousness.”

Mama picks up a pen and writes out the verse on an index card. I see the writing as a miracle. A month ago she couldn’t read or write her name, much less a whole verse.

“How do you spell devotion?” she asks.

When I think of that word now, I don’t think of scriptures. I think of the humility required for a parent to allow a child to bath them. I pump lotion into my palm – thankful for the sweet scent of coco-butter, a welcome reprieve from the smell of alcohol and multi-shaped pills – and rub it on my mother’s back.  There are no wrinkles there. No sign of the cancer that has withered her legs and arms. In a backless dress, Mama could hold her own against Jennifer Anniston.

“I know this has to be hard on you and your sister,” Mama says as I rub the lotion over the soft curve of her shoulders.  “But I don’t want to go into a nursing home.”

I know I should tell my mother that caring for her isn’t hard but it would be a lie. So instead I tell her that we will not put her in a nursing home. That I am caring for her because I want to, and that’s true. I want to be the one who bathes her, dresses her, sits and reads to her, prays with her, for her.

Caring for Mama is hard but not for the reasons that are obvious: I drive hundreds of miles each week to be with her. I have slept at the foot of my mother’s bed or in chairs next to her bed since she fell ill. She doesn’t sleep through the nights, which means I don’t either. There are pills to dole out, shots to administer, meals to cook, floors to mop, clothes to wash, and always piles of books to read in search of something that will give Mama peace.

“I just want to go to sleep and never wake up,” Mama says as I bow low, holding out her pant leg in front of her right foot, helping her dress for the day.

“You and the rest of the world,” I answer.

I have no hope that Mama’s death will be peaceful.  Hardly anything about her life has been. Blood stains the tissues that she coughs into. Her breathing is labored, an exhausted runner at the end of a marathon.

I begged my mother to quit smoking. Begged her. I told her that if she died from smoking I would be so angry with her.

The smoking kept us apart. She wouldn’t go to a movie, wouldn’t sit through a school play or high school graduation, wouldn’t plan a vacation to Sedona, Arizona — a place artists like my mother ought to visit once — or  even a shopping trip to Portland because being with me meant she would have to curb her smoking and my mother was addicted.

“Don’t blame yourself,” the kind doctor told me when he found me weeping outside my mother’s hospital room. “There’s a reason they call it an addiction.”

I am in Washington, D.C. this weekend, for Veterans Day. I will stand on a platform before that black marble V and read from Panel 9 East Line 71, my father’s name: Staff Sgt. David Paul Spears. And I will remember again the cries of my mother that July day of 1966 when the soldier brought that awful Regret-to-Inform-You telegram to our little trailer house in East Tennessee.

The year I was one of the featured speakers at the Vietnam Veterans Memorial Wall. I asked my mother to go. I had written a book about my father’s death and my mother’s struggle – After the Flag has been Folded (William Morrow) – and I wanted Mama to be among the thousands who would hear me speak that day. Friends offered to buy her a first-class seat. Still Mama refused. She didn’t go then, or later when I read from the book at the Library of Congress.

I realize now that mother will never ever stand before the Wall that Heals, will never run her fingers over Daddy’s name etched in that shiny granite surface, will never be embraced, as I have so many times, by the men and women who served and survived.  She will never hear them whisper their thanks for her sacrifices, or witness their eyes well with tears as they pay their respects  to the fallen and the Gold Star families left behind.

Sometimes we miss out not because of God’s wrath against us, or his punishment for our wrongdoing, but because we continue to deny ourselves the healing.

Karen Spears Zacharias is author of After the Flag has been Folded: A daughter remembers the father she lost to war and the mother who held the family together. (William Morrow)