The Death of Miriam Carey: An Unnecessary Cruelty 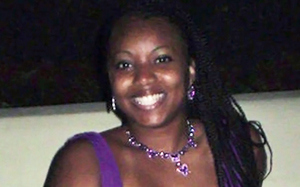 There will be a lot of people who disagree with me. I don’t mind. Disagreement is part of a healthy dialogue. I have said it a gazillion times before and I’ll reiterate it now — I never, ever want to live in the place where everyone thinks the same way.

Disclaimer out of the way, I was not surprised to read the news reports stating that Miriam Carey was being treated for postpartum depression, a year after her daughter’s birth.

As ABC reports,” a 2006 study published in the Journal of Women’s Health found that postpartum psychosis typically occurs in the first one to four weeks after childbirth and is an “overt presentation” of bipolar disorder that coincides with hormonal shifts after delivery.

The patient can develop “frank psychosis, cognitive impairment and grossly disorganized behavior that represent a complete change from previous functioning,” according to the study.

“These perturbations, in combination with lapsed insight into her illness and symptoms, can lead to devastating consequences in which the safety and well-being of the affected mother and her offspring are jeopardized,” wrote study authors Dorothy Sit, Anthony J. Rothschild and Katherine L. Wisner.”

Miriam Carey, you may or may not know, is the name of the woman police wrongly shot to death in Washington, D.C. last week.

She was unarmed, save for the vehicle, which many will claim was a weapon. Listen, if she wanted to kill someone with her car there was ample opportunity to do just that. Yes, she attempted  to crash through a barricade at the Capital building. Had that been a barricade at the Federal Building in Greeneville, Tn. it’s likely that Ms. Carey would still be alive today.

She chose the wrong place, suggested some, as if mental illness leaves a person with choices.

But then that’s part of the problem isn’t it?

Those of us who don’t suffer from mental illness, men in particular who have never dealt with postpartum depression (PPD) — or the more commonly misdiagnosed postpartum psychosis (PPP) – have no idea how paranoia can mess with your ability to reason.

If you have ever borne witness to a loved one struggling with the chemical imbalances caused by pregnancy and the after effects of pregnancy, you know that the shooting death of Miriam Carey was an unnecessary cruelty.

It was an overreaction by well-meaning but frightened law enforcement. What we really had were paranoid people on both sides of the law, but only one side was well-armed. They are the ones who walked away from all this unscathed. While a confused and frightened mother lay dead in front of her daughter’s eyes.

The general public tends to lump all postpartum behavior into one category, most commonly known as the baby blues. This has been the label traditionally assigned to women who are weepy or feeling overwhelmed during childbirth or in the weeks after it.

My doctor, who happened to also be a friend, suggested I might need to see someone. I responded to his suggestion by crying more. Eventually, however, I was able to work through the fear and the blues subsided. That’s not because I willed the blues away, it’s simply because I wasn’t struggling with postpartum depression or, as was the case of one of my dearest friends,  postpartum psychosis.

It was my girlfriend’s struggle with postpartum psychosis that inspired me to write MOTHER OF RAIN, the story of Maizee Hurd who can’t silence the voices in her own head.

My girlfriend gave birth twice, ten years apart, and each time she was beset with the symptoms of postpartum psychosis. Perhaps you aren’t aware of them? I certainly wasn’t. I had never heard of PPP until my friend’s second pregnancy and subsequent hospitalization. Here’s how Mental Health Association defines PPP, which affects less than one percent of all pregnant women:

A woman who is diagnosed with PPP should be hospitalized until she is in stable condition. Doctors may prescribe a mood stabilizer, antipsychotic or antidepressant medications to treat postpartum psychosis. Mothers who experience PPP are highly likely to suffer from it again following their next pregnancy.

Do you remember Andrea Yates, the Texas mother who killed her five children? Yates had been diagnosed with PPP and her husband, Rusty, was told that the couple should avoid pregnancy. The worst thing you can do for a woman who suffers from PPP is get pregnant. The second worse thing is to isolate her and deny her the right kind of medical care. The reports I studied on Andrea Yates indicate that Rusty Yates did all of the above. Which, in my book, makes Rusty Yates as much responsible for the death of his children as Andrea. Perhaps even more so, because he was supposedly the rationale one.

I watched in confusion and in prayer as my girlfriend spiraled through her first pregnancy. The PPP did not manifest itself until her third-trimester. By the time her son was six weeks old, my girlfriend was nearly catatonic. She was institutionalized. She was over-medicated. She was wrongly-diagnosed and wrongly-medicated. That is not uncommon for women suffering from PPD and PPP.

That’s one of the reasons I set MOTHER OF RAIN in the 1940s Appalachia. Because it seems to me that when it comes to mental health issues, we often take an archaic approach to treatment. Especially when it’s men doing the treating of issues only women experience, issues like pregnancy. That’s not always the case, of course, but historically, the gender-difference has been problematic when it comes to the care and treatment of pregnant women who suffer from PPD or PPP.

Sometime between the first pregnancy and the second pregnancy, my girlfriend sat down with me and explained the darkness that settled over her when her son was born. She told me about the voices she heard, about the paranoia she felt. She told me about the troubling visions she had and the overwhelming sense of dread. She spoke of her desire to end her life just to escape the torture of her mind.

She spoke rationally of these things. When she explained it, I knew that what she was dealing with was not baby blues, but something far beyond my limited understanding.

I promised  her if she ever got pregnant again, I would be there for her.

When she called me during her third-trimester of her second-pregnancy and begged me to not let her do anything to hurt her babies, I bought a plane ticket. I also called her family and told them that she needed to be under the care of an endocrinologist.

It wasn’t until after a suicide attempt following the birth of her second child that she came under the care of an endocrinologist who has been treating her successfully ever since. Today she is stabilized. Her children have grown into bright and beautiful human beings. Raised by a loving mother who has struggled and fought her way to a level of consciousness beyond PPP.

The difference between my girlfriend and Andrea Yates is that my girlfriend was surrounded by a big loving family intent on getting her the right kind of medical care. Instead of isolating her, the family came together as a community and fought for her. They were persistent and relentless in their care and compassion for her. And they demanded the best of treatment available. Fortunately, she had the health insurance and a husband willing to pay for that care.

But under different circumstances, she could have been the one driving that car.

She could have been Miriam Carey.

She could be dead today, were it not for the intervention of family and loved ones and doctors learned in the manifestations of PPP.

There will be those who shrug their shoulders and walk away from the death of Miriam Carey. They will call it a tragedy. But they will excuse the officers who overreacted and shot and killed a confused and troubled and mentally unstable young mother.

But I won’t be one of them.

Arming people and giving them permission to kill the mentally unstable is not an answer. It’s part of the problem.