“Neither Do I Condemn You” – Thoughts from Metropolitan K.P. Yohannan

“Neither Do I Condemn You” – Thoughts from Metropolitan K.P. Yohannan December 9, 2020 KP Yohannan

WILLS POINT, TX – KP Yohannan, founder of Gospel for Asia (GFA World), whose heart to love and help the poor has inspired numerous charities like Gospel for Asia Canada, and Metropolitan of Believers Eastern Church, to serve the deprived and downcast worldwide — shares his thoughts on our tendency to condemn and pronounce judgment on others, and challenges us instead to become agents of change through Christ-like compassion.

James and John were furious. These Samaritans had the gall to close their village to Jesus just because He was traveling to Jerusalem. Instead of being overwhelmed with gratitude that the Jewish Messiah would even set foot on their soil, they closed their doors. Convinced that these heathens didn’t deserve another breath, the two disciples volunteered to call fire down from heaven, like Elijah, and wipe the whole group out. Jesus rebuked them immediately with these words: “You do not know what manner of spirit you are of” (Luke 9:55).

Jesus’ closest followers reverted to serious carnality just days before His crucifixion. This incident tells us something. In our own selves, when we are rejected or mistreated, we are capable of forgetting all the spiritual things we have learned and responding with judgment and retaliation just like the rest of mankind.

Following the Example of the One Who Was Sent

What happens to us that we so quickly look down on others? Along with Jesus’ disciples, we as believers sometimes feel we are qualified and even called to judge others because we think we know the laws of God and are zealous for righteousness. But Jesus didn’t judge those Samaritans who rejected Him. Neither did He judge the prostitutes, sinners and tax collectors who came to listen to His sermons.

The religious leaders brought Jesus a woman caught in adultery, convinced they had Him trapped. He was a Jew. He knew the Law of Moses. The stones were ready—He would have to pronounce the death penalty over her. But when He challenged those who were without sin to cast the first stone, one by one they left, each convicted by his own failures.

In the end, Jesus, the one and only One who could have passed judgment over her, sent her away with this statement: “Neither do I condemn you; go and sin no more” (John 8:11). What prevented Jesus from judging others? It was His knowledge of the purpose for which His Father had sent Him to this earth: “For the Son of Man did not come to destroy men’s lives but to save them” (Luke 9:56), and “He has sent Me to heal the brokenhearted, to proclaim liberty to the captives” (Luke 4:18).

Unless we learn to leave judgment to God, we act like a wrecking crew, demolishing lives wherever we go, and do not exhibit the Spirit of Christ. 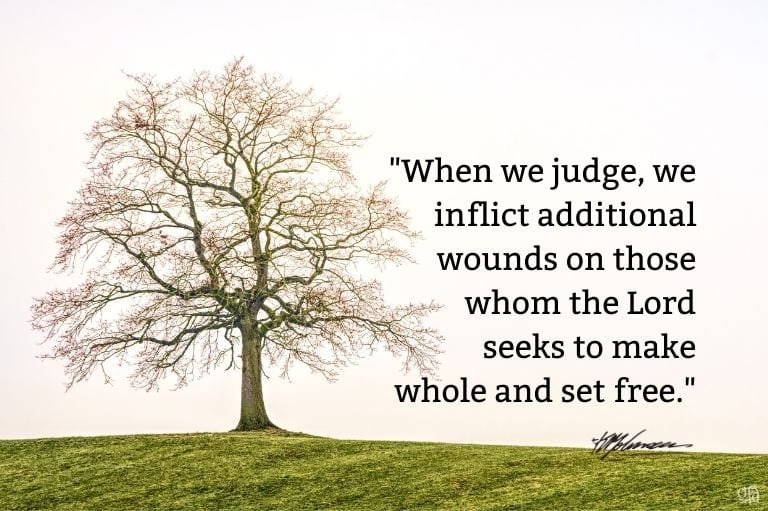 Walking in Compassion Rather Than Destruction

I remember a massive old building in downtown Dallas, which I passed every day as I went to seminary. But one day, to my surprise, the entire building was gone. I learned that a demolition crew had brought it down within seconds. All that remained was a huge pile of debris, which trucks were in the process of hauling away.

This is a very vivid picture of what happens when we begin to judge others. Unlike our Heavenly Father, who looks upon the heart, we only consider the outward appearance. That’s the reason we end up misjudging people’s motives and having no mercy for those who fail.

For the same reason, Eli, the priest who was supposed to represent God’s heart, looked at Hannah in her agony and thought she was drunk. And no one but Jesus noticed the enormous sacrifice the widow made when she put all the money she had—two coins—in the offering box at the temple.

Matthew 7:1–5 clearly tells us not to judge because we are not qualified nor called to do so. The consequences of not staying within our job description are much more serious than we think. First of all, we will be judged with the same measure that we use to judge others. But also when we judge, we inflict additional wounds on those whom the Lord seeks to make whole and set free. God wants us, His Church, to walk through this world with great spiritual sensitivity and discernment. We should not think that He wants us to close our eyes to unrighteousness. However, instead of judging, He has given us a ministry of compassion.

While the whole world was condemning One, that One was hanging on the cross for the whole world. Failure and weakness in others’ lives should only make us aware of their needs. It should evoke compassion in us and a desire to bring healing and wholeness to their lives. It should lead us to pray and cooperate with God’s work in them. We should ask the question, how can we show Christ-like honor and give dignity to others, even when they don’t deserve it? Thus, instead of judging and destroying, we become agents of change. We respond as Christ did and in obedience to Him who has asked us to follow His example.

What is your default: judgment or compassion?

“More dangerous than Covid-19”— In this article, Metropolitan K.P. Yohannan brings attention to the threat of starvation that millions of people in Asia face.

KP Yohannan, founder and director GFA World (Gospel for Asia) and Metropolitan of Believers Eastern Church (BEC), has written more than 250 books, including Revolution in World Missions, an international bestseller with more than 4 million copies in print. He and his wife, Gisela, have two grown children, Daniel and Sarah, who both serve the Lord with their families.

December 4, 2020
Metropolitan K.P. Yohannan: Unity is Vital to Our Calling
Next Post 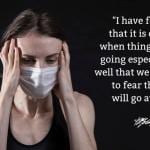 December 18, 2020 Don’t Let Fear Rule Your Life – by Metropolitan K.P. Yohannan
Recent Comments
0 | Leave a Comment
"keep Preachin Jesus is Coming Back He sees Our work"
brother in Christ He is Looking for You
"Amen, Dr. Yohannan. The gospel is the most important thing there is, and we believers ..."
Eileen Six Days in a Ditch
"Amen and amen brother Jesus has call us to continue his work on this earth ..."
Marie God’s Purpose for You
"Amen."
Eileen We Must See the Real Jesus
Browse Our Archives
get the latest from
Living in the Light of Eternity
Sign up for our newsletter
POPULAR AT PATHEOS Evangelical
1

Religion as "Communal Solidarity" or "Personal...
Cranach
Related posts from Living in the Light of Eternity