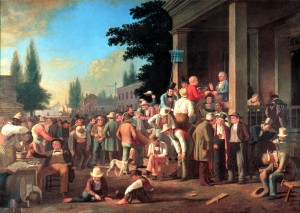 A thought for election day:

“The important thing here, I believe, is that truth isn’t outside power, or lacking in power: contrary to a myth whose history and functions would repay further study, truth isn’t the reward of free spirits, the child of protracted solitude, nor the privilege of those who have succeeded in liberating themselves. Truth is a thing of this world: it is produced only by virtue of forms of constraint. And it induces regular effects of power. Each society has its regime of truth, its ‘general politics’ of truth: that is, the types of discourse which it accepts and makes function as true; the mechanisms and instances which enable one to distinguish true and false statements, the means by which each is sanctioned; the techniques and procedures accorded value in the acquisition of truth; the status of those who are charged with saying what counts as true.”

November 3, 2014
Katie Melua Found a Spider Living in Her Ear
Next Post

November 4, 2014 Religion in Pop Culture Series
Recent Comments
0 | Leave a Comment
Browse Our Archives
get the latest from
Catholic
Sign up for our newsletter
POPULAR AT PATHEOS Catholic
1